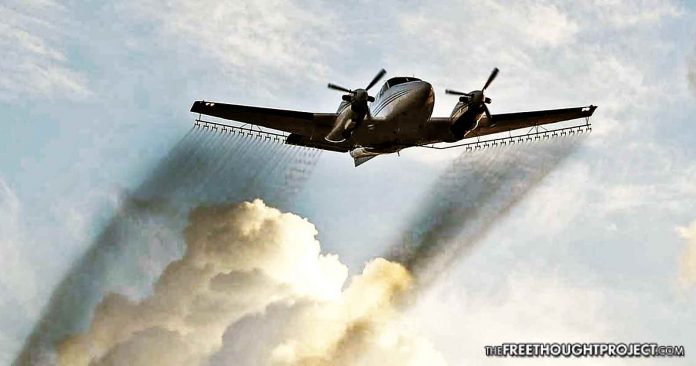 Newkirk, OK – A planned chemical/biological test by the Department of Homeland Security (DHS) has residents of a small Oklahoma town in fear that they are being used as human guinea pigs, as the federal government prepares to carry out plans for biological testing in the area next month.

DHS announced plans to conduct chemical and biological testing near the border between Kansas and Oklahoma in January and February, and again in June and July, to determine how much protection people would receive from being inside a house or an apartment in the event of a biological terrorist attack, according to a statement on the Homeland Security website.

The study is part of the Department’s ongoing commitment to preparedness and the shared responsibility of protecting the nation’s critical infrastructure. The purpose of this study is to gather data that enhances our predictive capabilities in the event of a biological agent attack. Specifically, this work will help in predicting the extent to which an intentional release of a biological agent may penetrate single family and multi-family structures. These tests will release inert chemicals and biological materials that will be used to measure the amount of material that penetrates the buildings under varied conditions.

“This helps responders and emergency managers decide how to respond and save lives. It helps in planning for evacuations…and other tactics,” John Verrico, DHS’s science and technology directorate spokesman, said in an email to Newsweek. “It also helps us to understand how materials settle and stick to surfaces.”

Verrico claims that no one has been injured or adversely affected by chemical tests performed by Homeland Security.

Contrary to the assertions of Verrico, area residents dispute that the chemicals are harmless to humans, animals, and the environment, and are working to stop the planned biological/chemical tests.

A resident of a nearby town, Jill Wineinger, collected almost 9,000 signatures on a petition to block the testing after Homeland Security placed a legal notice inviting the public comment about the tests during a 30-day open comment period.

“We just don’t really know or trust that everything that they’re saying is what they’re doing,” Wineinger told Newsweek.

DHS is reportedly reviewing approximately 300 comments received by email from the public before deciding whether to go forward with the testing, according to Verrico.
The chemical agents DHS plans to use in the testing are titanium dioxide, fluorescent brightener, urea, and Dipel, an insecticide.

“I’m really sorry that everyone is so afraid in Newkirk because these are very benign products,” Kitty Cardwell, a professor at Oklahoma State University and director of the National Institute of Microbial Forensics for Food and Agricultural Biosecurity, who has been involved in other Homeland Security projects, told Newsweek.

Cardwell believes the chemicals are non-toxic at that minuscule amount and likely wouldn’t reach populated areas.

Interestingly, while Cardwell and the U.S. government claim the chemicals used in the testing won’t adversely impact human health or the environment, the EU has proposed to classify titanium dioxide as a carcinogen—meaning that it is suspected of causing cancer – specifically when inhaled.

Wineinger disputes the idea that these substances are harmless, noting that she’s allergic to urea and could be hospitalized if she’s exposed to it. She also expressed concern about individuals with asthma and fears the area’s crops could be contaminated by the chemicals.

Kansas Congressman Ron Estes, in response to the planned chemical and biological testing, said federal agencies, “need to be 100 percent certain this test is safe for the residents of south-central Kansas,”noting that he has “numerous questions.”

Estes serves on the Houses Committee on Homeland Security, and in a statement released on Thursday, said that he is “monitoring the situation very closely.”

“I have numerous questions regarding this proposed test,” Estes said. “While it’s important for our federal agencies to test their abilities in response to threats, we need to be one hundred percent certain this test is safe for the residents of south-central Kansas.”

One comment on Wineinger’s petition presciently asked, “Why not test it in a more likely area to be hit by an attack, like NYC?”

“Maybe because people there have the money and clout to protect themselves from our [government]. An Indian school in the middle of nowhere. Yeah, just like the Tuskegee syphilis study. No one who matters gets hurt.”

The chemicals will be released at the now-abandoned Chilocco Indian School.

The Tuskegee Study of Untreated Syphilis in the Negro Male is a notorious secret research experiment conducted by the U.S. Public Health Service in Alabama from 1932 to 1972 involving 600 African American men.

Researchers conducted the study without participants consent as a means of tracking the progression of the deadly sexually transmitted disease—and participants received no treatment. Disgustingly, those unfortunate human guinea pigs were instead monitored until they died and then examined post-mortem.

The idea that citizens are being subjected to a potentially dangerous situation by DHS, without consent, certainly raises some serious questions as to the methodology being employed.

Please share this article to raise awareness about chemical/biological testing being carried out on an unsuspecting American public!