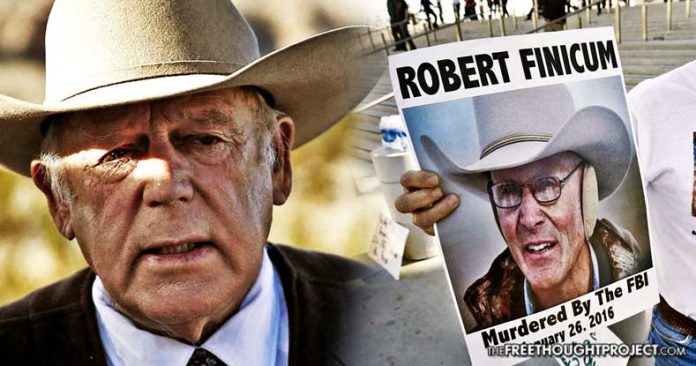 Bunkerville, NV — The Bureau of Land Management’s (BLM) lead investigator into the failed Bundy Ranch operation that took place April of 2014 has blown the whistle in an effort to expose far-reaching misconduct, recklessness, corruption and unrestrained persecutory behavior toward the Bundy family.

The Bundys and other defendants are currently on trial for conspiring to stop federal authorities from confiscating family cattle after Cliven Bundy failed to pay grazing fees and fines for years. They’re also facing charges relating to using or carrying a firearm in a crime of violence, threatening a federal law enforcement officer, obstruction of justice and extortion. Their trial began Nov. 14 in Las Vegas.

According to a report by The Oregonian:

The memo comes from Larry Wooten, who had been the lead case agent and investigator for the U.S. Bureau of Land Management after the tense confrontation outside the patriarch’s ranch near Bunkerville. Wooten also testified before a federal grand jury that returned indictments against the Bundys. He said he was removed from the investigation last February after he complained to the U.S. Attorney’s Office in Nevada…

Then last Wooten sent a whistleblower email to the U.S. Department of Justice, alleging a “widespread pattern of bad judgment, lack of discipline, incredible bias, unprofessionalism and misconduct, as well as likely policy, ethical and legal violations among senior and supervisory staff” at the Bureau of Land Management’s Office of Law Enforcement and Security.

Wooten wrote that supervisory agents with the bureau repeatedly mocked the defendants in an “amateurish carnival atmosphere” that resembled something out of middle school, displayed “clear prejudice” against the Bundys, their supporters and Mormons, and prominently displayed degrading altered booking photos of Cliven Bundy and other defendants in a federal office and in an office presentation.

The memo described “heavy handedness” by government officers as they prepared to impound Cliven Bundy’s cattle. He said some officers “bragged about roughing up Dave Bundy, grinding his face into the ground and Dave Bundy having little bits of gravel stuck in his face.” Dave Bundy, one of Cliven Bundy’s sons, was arrested April 6, 2014, while videotaping men he suspected were federal agents near his father’s ranch.

Wooten contends that supervisory agents failed to turn over required discovery evidence to the prosecution team that could help the defense or be used to question the credibility of a witness, as required by law.

The revelations contained in the memo prompted Cliven Bundy’s attorney to file a motion to dismiss the case, which is already in shambles over the government’s failure to share evidence with the defense as required by law.

The judge subsequently sent the jury home for more than a week in an effort to determine the validity of the claims, as the prosecution scrambled to save their case against the Bundy ranch defendants.

Additionally, lead agents on the case “instigated” monitoring of jail phone calls without the consent of the U.S. Attorney’s Office or the FBI – essentially going rogue – until Nevada’s acting U.S. attorney Steven Myhre, who is leading the prosecution, put an end to the illicit surveillance.

The memo by Wooten accused special agent-in-charge of the Bunkerville/Gold Butte operation for the BLM, Dan Love, of intentionally ignoring U.S. Attorney’s Office directives and his BLM superiors “in order to command the most intrusive, oppressive, large-scale and militaristic trespass cattle impound possible.”

The Oregonian reported that:

Wooten said he learned from other agency supervisors that Love had a “Kill Book” as a “trophy,” in which he essentially bragged about “getting three individuals in Utah to commit suicide,” following a joint FBI-BLM investigation into the alleged trafficking of stolen artifacts.

Wooten said his supervisor took photos in a secure command post at FBI headquarters in Las Vegas of an “Arrest Tracking Wall,” where photos of Cliven Bundy and co-defendant Eric Parker were marked with an “X” over them, and emailed out the photos, although no photos were allowed to be taken in that area.

After the discovery of the extreme corruption, Wooten called prosecutors in the Bundy case and told Myhre and Assistant U.S. Attorney Nadia Ahmed, as well as FBI special agent Joel Willis, that he believed that supervisors were failing to share important witness statements with them.

When Wooten eventually asked Myhre if statements made by Love, such as “Go out there and kick Cliven Bundy in the mouth (or teeth) and take his cattle” or “I need you to get the troops fired up to go get those cows and not take any crap from anyone” could be construed as evidence that must be shared with the defense.

He said that Myhre replied by saying “we do now” or “it is now.”

Only two days later Wooten was removed from the investigation by his supervisor. Another BLM agent confiscated files relating to his investigation from his office; including computer hard drives, collected emails, text messages, case notes and “lessons learned,” Wooten wrote.

“These items were taken because they contained significant evidence of misconduct and items that would potentially embarrass BLM Law Enforcement Supervision,” Wooten’s memo noted. “I am convinced that I was removed to prevent the ethical and proper further disclosure of the severe misconduct.”

According to Wooten, he was told by his supervisor that Myhre “furiously demanded” his removal from the case – and said something regarding the BLM’s failure to hand over critical evidence to his office.

Myhre “adopted an attitude of ‘don’t ask, don’t tell” or “preferred ignorance” in regards to information from the BLM that could be helpful to the Bundy defense, according to Wooten.

Additionally, he noted the extremely inaccurate talking points used by prosecutors, particularly failing to disclose the fact that BLM sniper teams took up positions around the Bundy Ranch before the standoff on April 12, 2014.

“Not only did Mr. Myhre in my opinion not want to know or seek out evidence favorable to the accused, he and my supervisor discouraged the reporting of such issues,” Wooten wrote.

Wooten claims he respected Myhre, but believes his decision-making ability is “clouded” by personal bias and a “desire to win the case at all costs.”

“I have tried to resolve these issues through my chain of command but I have failed,” Wooten wrote in the memo.

He noted that he believed it to be “his obligation” to report what he had discovered, noting that the memo was a “last resort.”

The trial has been postponed until next Wednesday, as U.S. District Judge Gloria M. Navarro attempts to reconcile numerous concerns about evidence not being shared with the defense. She intimated that if violations are found, potential remedies range from striking witness testimony or delaying the trial, to declaring a mistrial.

Cliven Bundy’s lawyer Bret O. Whipple described the information contained in the memo as “quite a development” one he hadn’t seen in his 20-plus years of legal work.

“In my mind, I think the case should be dismissed by next Tuesday,” Whipple said. “I think I can get my client home for Christmas.”

Please share this damning information to expose the extreme corruption that has taken place in the Bundy case!