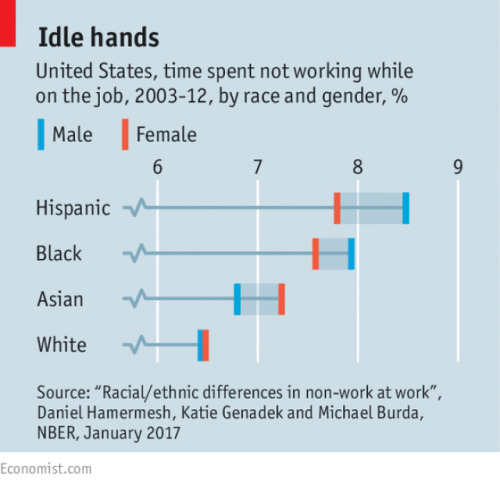 A trio of liberal economists made the mistake of doing a study on how American workers spent their working hours. Their purpose was to find evidence of racial discrimination which would explain a racial gap in pay. To their dismay, however, the economists found significant racial differences in how much time Americans spent not working while on the job, i.e., how hard one works.

The economists delayed publishing their findings until after the 2016 presidential election because they didn’t want to give ammunition to what Hamermesh calls “Trump and his minions” to use “as a propaganda piece.”

As reported by The Economist on Feb. 4, 2017, this was the study’s methodology:

The study found statistically significant racial and gender differences in the amount of time spent not working while on the job — even after controlling for geography, type of work, union status, and other variables:

Trying to explain the racial gap, the study first considered racial discrimination as the cause — that minority workers slack off work because of discriminatory treatment by managers. But that explanation was rejected because the study found that self-employed minority workers also spent more time not working.