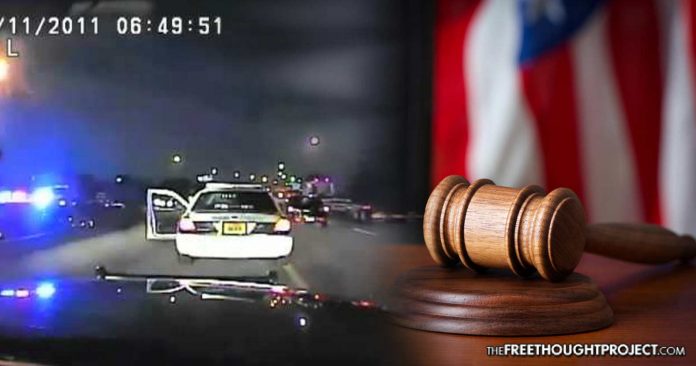 Grand Haven, Michigan – A routine traffic stop turned into a search for drugs in which the officer intentionally turned off his Dash Cam—the Sixth Circuit Court of Appeals has upheld a lower court’s ruling that the officer did nothing wrong, completely ignoring the precedent set by the Supreme Court.

According to court documents from the case, the incident started around midnight on Sept. 13, 2015, when Michigan State Trooper Christopher Boven received word from his colleagues that he was near the owner of a cell phone they had been tracking for suspicion of drug trafficking.

Boven located a car that was leaving a gas station and followed it until he found a reason to pull it over. As court documents noted, he “trailed the vehicle at the request of the Team and eventually pulled it over at 12:34 a.m. for a lane violation.”

The car was occupied by the Hunt family. Boven requested the driver’s licenses of Darrell Hunt, his wife, and his daughter, Mercedes, who was driving the vehicle. Boven then stayed in his car on the claim that he was checking the licenses, until a K9 unit arrived. It was at this point that he turned off his Dash Cam.

“Once Deputy Osbun arrived, Trooper Boven explained the situation to him to ‘keep him in the loop’ and for officer safety. He also turned off the dashboard camera. According to his testimony, he did so to prevent information about the confidential informant from coming to light in case the stop revealed no drugs. After speaking with Deputy Osbun, however, Trooper Boven apparently forgot to restart the dashboard camera and, as a result, there is no footage of the search of the car. In total, twenty minutes elapsed before the camera was restarted.”

The fact that Boven turned off the Dash Cam, and it stayed off for at least 20 minutes, while a search of the vehicle was conducted, should raise serious red flags in any court. The questionable behavior continued when Boven asked Mercedes Hunt for permission to search the vehicle, and she declined.

According to court documents, Boven insisted that he would start with a canine search around the outside of the vehicle, and then “depending on what the dog indicated or didn’t indicate, we’d get them on their way momentarily.” When officers claimed that the dog alerted to the presence of drugs in the car, Darrell Hunt told them that he had both heroin and cocaine in the car.

Hunt was arrested and ultimately entered a conditional guilty plea to one count of drug trafficking, and was sentenced to 180 months in prison. In his appeal, Hunt made a motion for suppression of evidence on the grounds that there was insufficient evidence, both for the canine search, and of the evidence from the canine search, aided by the fact that the officer had intentionally turned off his Dash Cam:

While Circuit Judge Alan E. Norris claimed that the length of time the officer left the Dash Cam off, made it a justifiable offense under a precedent set by the Supreme Court, Tech Dirt noted that it was the rights violation that mattered—not the length of time in which it was committed:

“This completely ignores Supreme Court precedent, which made it clear it wasn’t the length of the rights violation, but rather the violation itself. Once the purpose of the traffic stop has been achieved, any fishing expeditions by law enforcement past that point are Constitutional violations, whether it’s five minutes, ten minutes, or a half hour. A holding like this makes it that much easier for officers to slow roll traffic stops so they can run a drug dog around a car they stopped for a lane change violation. That’s what appears to have happened here and both courts (district, appellate) said this is fine.”

As The Free Thought Project has reported, while video evidence of an officer’s crimes does not guarantee that he will be charged accordingly, the footage from body and dash cameras has been instrumental in many cases. In August, Body Cam footage revealed that multiple Baltimore Police officers were planting drugs on innocent individuals and conspiring to manufacture evidence.

In the case of Darrell Hunt, it appears that the judges who have addressed his charges seem to focus more on the evidence that was recovered, than on the methods that were used to obtain it, setting a dangerous precedent for other officers who choose to turn their cameras off to suppress evidence.