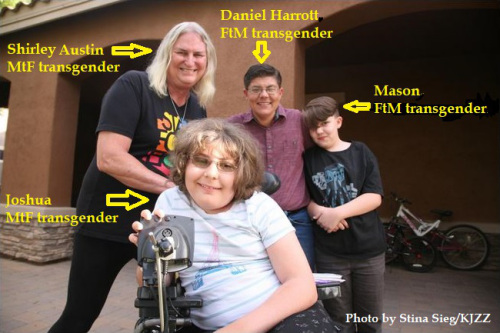 A family of four — “father,” “mother,” “son” and “daughter” — in Queen Creek, Arizona are all “transgenders,” a term that biologists say has no basis in reality.

Queen Creek is a town of about 34,000, straddling Maricopa and Pinal counties.

Daniel says trans people have been in his family for 100 years and that his grandmother’s sister was what people used to call a “cross-dresser.” The grandmother (X) was so “scared” by her sister’s behavior that X made sure her own daughter — Daniel’s mom — dressed feminine. Daniel’s mom, in turn, did the same by dressing her daughter, Daniel, in feminine clothes, insisting, “You must be a girl. This is who you were born to be.”

Daniel kept waiting for makeup and women’s clothing to feel right, but that never happened, even after marrying a man and giving birth to Joshua and Mason.

Last year, Joshua wanted to join the Girl Scouts, despite being a boy. That’s when Daniel looked up the word “transgender”. He said: “And when I finally looked it up, and I realized, ‘Oh my gosh, they’re trans, and I know it’s true – because I am, too, and it’s been my whole life.’”

Soon after, Joshua “came out” as a trans girl; Mason came out as a trans boy; and Daniel, wanting to protect and support his kids, decided “he” has to live as “his” authentic self, too. So Daniel cut “his” hair and went shopping — in the men’s section. “He” said: “I opened my eyes, looked in that dressing room mirror and went, ‘Oh this is it. This is perfect. This is me.’”