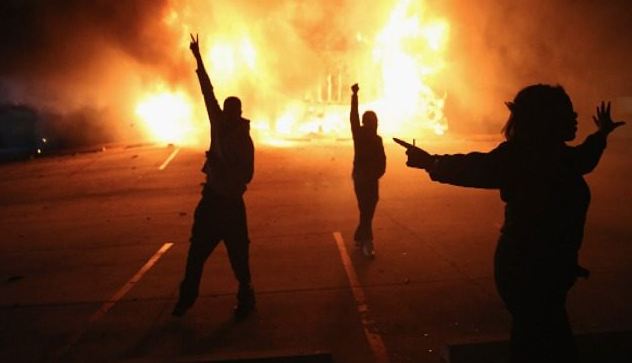 (Natural News) A bakery and ice cream shop in Ohio has filed a lawsuit against Oberlin College & Conservatory near Cleveland after the school’s vice president and dean of students, Meredith Raimondo, outlandishly accused the shop’s owner of being a “racist” simply for calling the police on three black males who attempted to steal several bottles of wine from his store, which has been in business since 1885.

According to reports, the trio of dark-skinned thugs not only tried to steal from Allyn Gibson, the owner of Gibson’s Bakery, but they also physically assaulted him, with reports indicating that they actually punched and kicked him. All three plead guilty back in August to attempted theft and aggravated trespassing, despite initially claiming that they had merely tried to use fake identification cards to illegally purchase alcohol (which later turned out to be a lie).

As is becoming all too common amongst anti-white racists these days, the three black criminals, as they were being confronted by Gibson for their criminal activity, immediately fired false accusations at him that he was a “racist” and was “racially profiling” them for standing up to their thievery. And the anti-white, criminal enablers at Oberlin College apparently agree with this sentiment, the school’s Student Senate having passed some meaningless “resolution” declaring that Gibson has “a history of racial profiling and discriminatory treatment.”

“Racism can’t always be proven on an Excel sheet,” stated junior and vice chair of Oberlin’s Student Senate, Kameron Dunbar, to the Chicago Tribune, implying that Gibson’s refusal to roll over and allow a pack of criminals to rob him blind is akin to lynching them while wearing a pointy white hat.

Why not give Oberlin College a call or show up at her office to share your thoughts on her racist coddling of blacks who commit crimes?

But the real kicker is how self-loathing Oberlin College matriarch Meredith Raimondo decided to handle the situation. Rather than take a stand against black crimes, which last time we checked still matter, this race traitor actually took the side of the three thugs by declaring that Gibson’s bakery is a “RACIST establishment with a LONG ACCOUNT of RACIAL PROFILING and DISCRIMINATION.”

Raimondo further encouraged anti-white, racist groups like Black Lives Matter to protest, and even helped facilitate the canceling of classes in order for white-hating students to organize and launch their crusade to take down the family-owned business. In his lawsuit against the school, Gibson also alleges that Oberlin used student tuition money to pay for one of the black thugs’ defense attorneys, even going so far as to hire a limousine to take him to a meeting with this lawyer.

“I have not taken a paycheck since this happened more than a year ago,” Gibson, who did absolutely nothing wrong, is quoted as saying to the Associated Press. “Sometimes you have to stand up to a large institution. Powerful institutions – including Oberlin College – and their members must follow the same laws as the rest of us.”

A total of 40 people have reportedly been arrested for shoplifting at Gibson’s since this incident conveniently occurred last year on November 9, just one day after the election of Donald Trump as president. According to The Gateway Pundit, just six of these individuals were black, but somehow the shop is still “racist.”

Those who live in the area and wish to speak personally with Meredith Raimondo to share their thoughts on the matter can find her at her campus office in Wilder Hall, Room 105. She can also be reached by email at [email protected], or by phone at (440) 775-8462.