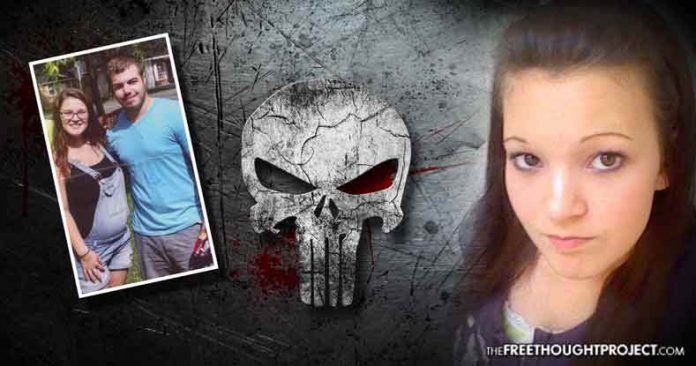 Baton Rouge, LA – When a teenage girl begged for help from police and claimed that her stepfather began sexually abusing her when she was 4 years old, the case eventually went to a judge who let her abuser off on an incredibly light sentence.

Robert Noce Jr., 47, pleaded “no contest” to the accusations from 15-year-old Brittany Monk, and instead of sentencing him to time in prison, Judge Trudy White sentenced him to just five years of probation.

Two weeks after the judge’s decision not to punish the child molester, Noce was found dead on Independence Day 2015. He had been killed by Monk and her boyfriend, a revenge killing that is just now making national headlines.

Enter Jace Crehan, Monk’s boyfriend. He admitted to detectives that he strangled and stabbed Noce after he said the justice system had “failed” to punish Monk’s abuser. Crehan will likely be seen as a hero to victims of child abuse. During the subsequent murder investigation, Crehan told detectives what he did to Noce and that he feels neither remorse nor regret. In a recorded conversation he said:

Crehan told investigators where to find the knife he used to stab Noce and admitted he went to his home to give him a beat down, not kill him, but anger and passion took over, both led to the man’s killing, but not before Crehan described how Noce felt in those final moments of his life.

He was staring his actual penalty in the face…He knew exactly why.

While Noce pretended to be Monk’s stepfather, behind closed doors, he was her torturer. During those years of abuse, Monk told authorities Noce tortured her mentally as well as physically. After going into graphic detail with investigators describing her abuse, she described how Nose mentally abused her. He would say to her:

Compounding matters for Monk, her mother moved out and left her with Noce, and the abuse continued. Eventually, in 2012 when Monk was still a teenager, she told her mother what Noce had done to her. Monk was then subjected to the justice system which, apparently, let the man who had abused her for years get off with a slap on the wrist.

Noce only spent 19 days in jail while he was waiting to be bailed out. After confessing the torture, recalling the horror, reliving the nightmares all over again, Judge White set Noce free on probation. That is when street justice picked up where the broken judicial system failed to take action, some might say.

Even though a grand jury indicted him for “aggravated rape,” he has yet to spend one day in prison. That sad reality was too much for the couple who went together on July 4, 2015, to give Noce the beating of his life. That beating turned into a murder, and now both Monk and Crehan are awaiting their own sentencing. Monk pleaded guilty and is facing 40 years in prison.

“I feel a lot better,” Crehan told detectives. “It’s not regret…Is it remorse? I’m not sorry for what I did.”

Plauche pleaded no contest to manslaughter in the killing of Jeffery Doucet. As a result, he received a suspended seven-year prison term and was put on probation for five years. Plauche’s son has been present at Crehan’s trial in a show of support, not only for Crehan’s actions but also for his father.

Crehan stabbed Noce to death after choking him unconscious. He told investigators that Noce regained consciousness after being choked and lunged after Monk. Crehan said he grabbed the knife and stabbed his girlfriend’s abuser several times. Crehan and Monk have a child together. They are now asking for the same mercy the courts showed Noce.

Jody Plauche is now in his mid-forties. He commented to reporters about Crehan’s and Monk’s cases. He said Crehan, “killed a sex offender for a loved one.” He admitted his father was just as incensed with anger about the possibility that his abuser would never see a day in prison.

My father thought Jeff would get off without a life sentence just as Robert Noce did…There was no justice for Brittany Monk.

Plauche added he, “doesn’t condone taking the law into your own hands,” but feels the two and a half years Crehan has spent behind bars is, “just resolution in my opinion.” Additionally, he said, “My dad wasn’t in his right mind, and Jace and Brittany weren’t in their right minds.” Alluding to the reality both Crehan and Monk are now parents to a young baby, Plauche spoke to the difficult situation the family is now facing.

No parent should put themselves in a position to be prosecuted…He needs to be there for his son.