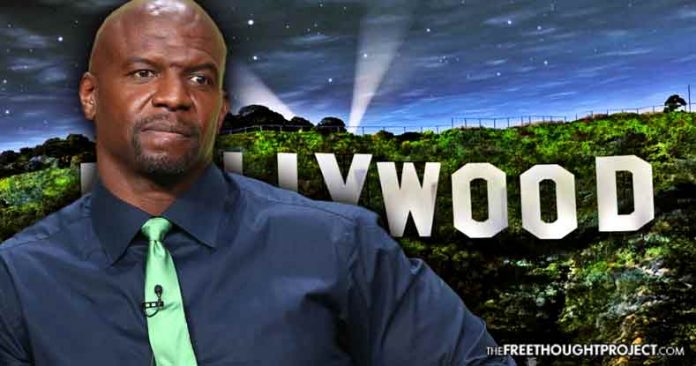 As the Free Thought Project reported last month, Hollywood actor and former NFL linebacker Terry Crews came forward with sexual assault allegations against Adam Venit, a head executive at the WME talent agency. Crews filed a sexual assault claim with the LAPD accusing the high-level executive of groping him at an industry party last year. His wife Rebecca has made a statement that she was with Terry during the time of the assault and witnessed the whole thing.

In the weeks since going public, Crews says that he has faced relentless harassment and intimidation from the “powers that be” in Hollywood. The pressure was on immediately after Crews went to the LAPD, where he was met by reporters outside of the police station just after he made his report. According to Crews, there is no way that TMZ could have known that he was filing the report unless they had “paid informants” inside of the LAPD.

The Entertainment Industry has PAID INFORMANTS inside the @LAPDHollywood In order to control talent.

Not even my wife knew when I was filing a police report against @WME agent Adam Venit.

Why was @TMZ waiting for me the moment I walked out of the station?#NOONEGETSAPASS

This week, Crews has taken to Twitter again to raise the alarm about the consistent harassment that he and his family are facing in the wake of his revelation. He says that he wants to be as public as possible about these threats to protect himself in the case of some “timely accident.” He was even warned by the LAPD that the forces he is up against “don’t play fair.” Crews believes that his house has been bugged, his computer hacked, and his family under constant surveillance.

My assailant Adam Venit is the founding partner at @WME, a corporation worth over $8 billion.

I believe my family is being tracked and possibly bugged.

I also believe @unclerush was asked to pressure me into dropping my case by @WME execs. Somehow they thought he was the “King of Black people”.

Someone hacked into the computer my son and I built together. I have to shut it down and replace the hard drive.
(Cont’d/2) https://t.co/HHcwBN4RH6

“LAPD task force detectives let me know these people don’t play fair. There are a lot of secrets to protect, and they will do anything to keep them.

The town is compromised. But me, and my team, are not.

If I were to have a timely “accident” — you know where to look,” wrote Crews.

LAPD task force detectives let me know these people don’t play fair. There are a lot of secrets to protect, and they will do anything to keep them.

The town is compromised. But me, and my team, are not.

If I were to have a timely “accident” — you know where to look.

@WME general counsel Seth Krauss surreptitiously brought up my wife’s name to my former attorney re: my case.@TMZ met me and my wife at the as we left the airport, then mysteriously edited out my comments about how they collude with the studios and agencies.

In spite of these ominous revelations, Crews maintains his courage and noted that he’s ready for anything these people try to throw his way.

“Retaliation in some form is expected- I would be naive to think otherwise…
But vulnerability and openness is actually my best protection. I’m ready,” he said.

But vulnerability and openness is actually my best protection.

Crews also revealed that Russell Simmons told him to keep quiet about the incident, which is what he was referencing by his “king of black people” remark. Since telling Crews to drop his case, Simmons has faced multiple sexual assault allegations of his own, including a forced sexual encounter with an underage girl.

Message Russell Simmons sent to me regarding my sexual assault case against Adam Venit of @WME:

In the months since making his initial statement on Twitter, Crews has become a voice for victims of sexual assault, commenting daily about things like “pimp culture” and how people in positions of power use that power for the sake of sexual domination.

It was widely reported that Venit admitted to the allegations in private and apologized to Terry during a sit down with WME boss Ari Emanuel. Unfortunately, Venit was able to keep his job after a 30-day suspension. This decision prompted Crews to drop the agency and instead sign with UTA.