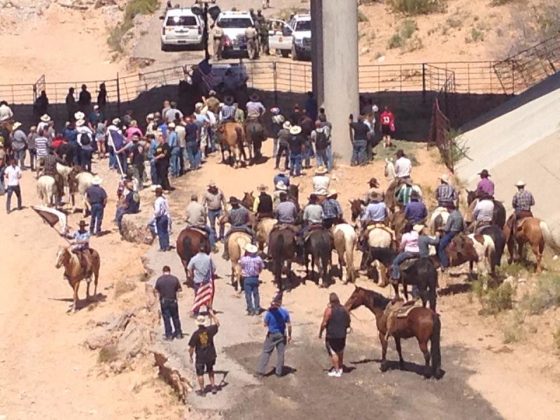 Just days after a shocking whistleblower complaint from a leading BLM investigator, a federal judge has declared a mistrial in the case against the Bundy family who have been accused of leading a 2014 standoff with the government over cattle grazing rights.

The judge, Chief U.S. District Court Judge Gloria Navarro, admonished the prosecution for specifically (and most likely purposefully) failing to turn over “potentially exculpatory” evidence to the Bundy defense team. Navarro also dismissed the jurors in the case despite seven weeks of testimony from overzealous prosecutors hellbent on taking out the entire Bundy family.

“The judge is obligated to disclose all evidence that might be favorable to defense attorneys,” she said, according to a report in The Washington Times.

She said the federal prosecution had failed to disclose information in five areas: “records about surveillance and snipers at the Bundy Ranch; unredacted FBI logs about activity at the ranch in the days around the standoff; threat assessments about the Bundys dating to 2012; and internal affairs reports about the BLM,” according to the Arizona Republic.

The mistrial comes as the second this year involving the 19 defendants in the three-tiered trial and another defeat for the Justice Department in cases involving the Bundy family and its protests against federal land-management policies in Nevada and Oregon.

The judge also scheduled a new trial for Feb. 26 although both defense attorneys as well as tens of thousands of Americans who have seen the evidence of a government conspiracy against the family are hoping that the charges are eventually completely thrown out.

The mistrial comes on the heels of an explosive whistleblower complaintfrom lead BLM investigator Larry Wooten who detailed a borderline criminal operation carried out by the Bureau of Land Management against the family.

According to a report by The Oregonian:

The memo comes from Larry Wooten, who had been the lead case agent and investigator for the U.S. Bureau of Land Management after the tense confrontation outside the patriarch’s ranch near Bunkerville. Wooten also testified before a federal grand jury that returned indictments against the Bundys.

He said he was removed from the investigation last February after he complained to the U.S. Attorney’s Office in Nevada…

Then last Wooten sent a whistleblower email to the U.S. Department of Justice, alleging a “widespread pattern of bad judgment, lack of discipline, incredible bias, unprofessionalism and misconduct, as well as likely policy, ethical and legal violations among senior and supervisory staff” at the Bureau of Land Management’s Office of Law Enforcement and Security.

Wooten wrote that supervisory agents with the bureau repeatedly mocked the defendants in an “amateurish carnival atmosphere” that resembled something out of middle school, displayed “clear prejudice” against the Bundys, their supporters and Mormons, and prominently displayed degrading altered booking photos of Cliven Bundy and other defendants in a federal office and in an office presentation.

The memo described “heavy handedness” by government officers as they prepared to impound Cliven Bundy’s cattle. He said some officers “bragged about roughing up Dave Bundy, grinding his face into the ground and Dave Bundy having little bits of gravel stuck in his face.”

Dave Bundy, one of Cliven Bundy’s sons, was arrested April 6, 2014, while videotaping men he suspected were federal agents near his father’s ranch.

Wooten contends that supervisory agents failed to turn over required discovery evidence to the prosecution team that could help the defense or be used to question the credibility of a witness, as required by law.

Additionally, lead agents on the case “instigated” monitoring of jail phone calls without the consent of the U.S. Attorney’s Office or the FBI – essentially going rogue – until Nevada’s acting U.S. attorney Steven Myhre, who is leading the prosecution, put an end to the illicit surveillance.

The memo by Wooten accused special agent-in-charge of the Bunkerville/Gold Butte operation for the BLM, Dan Love, of intentionally ignoring U.S. Attorney’s Office directives and his BLM superiors “in order to command the most intrusive, oppressive, large-scale and militaristic trespass cattle impound possible.”

In other words, we now know that what many Bundy supporters originally believed is absolutely true. The BLM, along with other law enforcement authorities, conducted an illegal operation to target the family and did so with the apparent belief that they were above the law.

Now, with this latest mistrial, one can only hope that the clear cut evidence of a conspiracy against the Bundy’s will soon lead to ALL the charges being completely dropped.