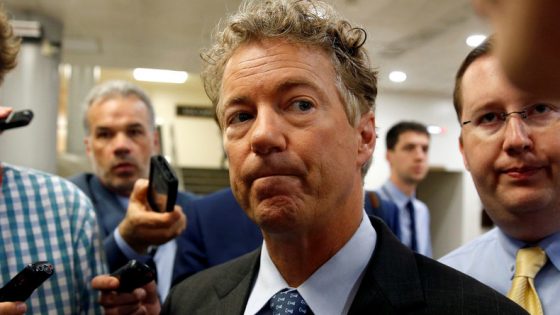 After weeks of shocking revelations that proved without a shadow of doubt that anti-Trump operatives throughout the federal government actively worked to stop Donald Trump from winning the election, Senator Rand Paul has publicly called for an investigation into what many believe was a sort of soft coup attempt designed to insure that Hillary Clinton became president.

Time to investigate high ranking Obama government officials who might have colluded to prevent the election of @realDonaldTrump! This could be WORSE than Watergate!

While Paul has obviously disagreed with the president on a variety of political issues, his call for an investigation shows that even those who don’t necessarily “stand with Trump” are worried about the damage this anti-Trump operation has done to American democracy in general.

Perhaps the most shocking example of anti-Trump sentiment came in the form of a so-called “insurance policy” that was discussed between FBI agent Peter Strozk and his mistress, FBI lawyer Lisa Page. Strozk not only helped kickstart the sham Russian collusion investigation, he was also the leading investigator into Hillary Clinton’s use of a private email server. Keep in mind Strzok was openly supportive of Hillary Clinton for president.

As Infowars has reported, Strozk discussed an “insurance policy” in case Donald Trump won the presidential election, in an exchange with lawyer Lisa Page, and almost certainly with Deputy FBI Director Andy McCabe.

Another Republican Representative, Jim Jordan of Ohio argued Wednesday that the majority of Mueller’s team opposes Trump. He also noted that the Clintons paid Russians to influence the 2016 election.

“We know, for a fact, the Clinton campaign paid Russians to do what? To influence the election. And yet we’ve had this months-long investigation by Bob Mueller with no evidence that President Trump worked with Russians in any way.” Jordan said in an interview with CNN.

“It’s not the anti-Trump messages that bother me about Peter Strzok.” Jordan added.

“Most of Mueller’s team is anti-Trump. We know that. What concerns me is the intent to carry out a plan to disrupt the election. Because as Mr. Strzok said, we can’t afford to leave this in we the people’s hands. That is a problem.” he added.

We are now clearly seeing the downfall of the deep states public plan to stop Donald Trump from winning the election as well as take him out after he did end up winning.

One can only hope that those involved are actually charged and, if found guilty, locked up.

"Of course not!" Republican Rep. Jim Jordan says he has not coordinated with White House or Fox News about talking points on Mueller investigation pic.twitter.com/JF1f4jGPWZ