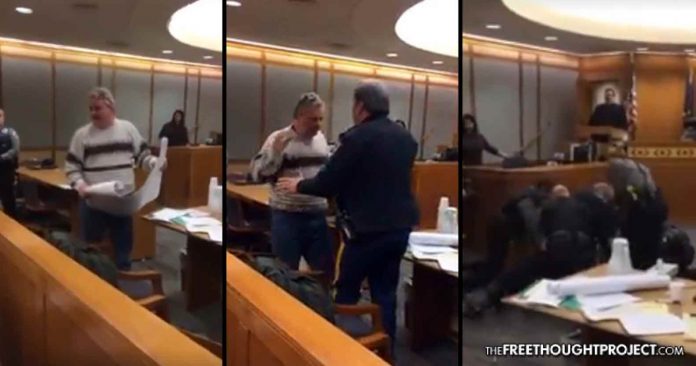 Anchorage, AK — This week, concerned citizens packed a courtroom and watched as 51-year-old David Haeg prepared to present evidence of widespread corruption, he says is rife throughout the judicial system and law enforcement in the state. However, just as he began speaking, the court moved to silence him—with extreme prejudice.

Haeg, who has been in the trenches for over a decade fighting to expose alleged corruption within the Alaskan judicial system, was prepared to share an extensive list of documents and evidence on Monday.

“By falsifying both facts and law, the order seeks to eliminate all issues and evidence proving widespread corruption within Alaska’s judicial system – including the systematic violation of our constitution,” Haeg explained of the situation.

According to KTUU, Haeg initially appeared at the Nesbett Courthouse for a status hearing regarding a case that stems from a 2004 conviction.

According to court documents, as KTUU notes, Haeg was originally convicted for illegally killing wolves near McGrath, while working with a state predator control program. In 2010, Haeg filed for post-conviction relief, alleging that corruption throughout the state’s judicial system has resulted in his case being repeatedly mishandled. He also runs Alaska – State of Corruption, a website that summarizes his accusations.

On Monday, after the judge had closed the case, Haeg asked that those who packed the court stay put so he could give them all the evidence in the case. This apparently infuriated the judge.

“This is our courtroom and we have evidence…. If you want to arrest me and drag me off, that’s the only way I’m leaving,” declared Haeg, before yelling, “It’s a conspiracy!”

Because the 51-year-old man refused to stop speaking to the people who were there to listen to him, the officers in the court then swarmed him to get him out. But Haeg refused to leave.

The half dozen officers then piled on top of the man and began deploying tasers. In total, Haeg says he was hit ten times.

“It was pretty traumatic,” Haeg said. “But court security officials did no more than necessary to prevent me from testifying about the constitutional violations above.”

“I was in pain,” he told KTUU. “My legs and back are covered in large welts, as a result of being tased so many times – approximately 10.”

After they took him down, Haeg was arrested and brought to the Anchorage jail where he was charged with disorderly conduct. Haeg told local media that he asked to speak with the state trooper who was in charge of the courtroom and the trooper who tasered him.

“At my request, I talked at length… about my right to enforce constitutional rights versus their duty to maintain courtroom safety,” Haeg said. Apparently, the officers felt Haeg was a danger to the court, in spite of the fact that he was only talking to the dozens of people there to see him.

“There’s no hard and fast rule for deploying a taser [in a courtroom],” said Anchorage Judicial Services Supervisor Lt. Robert French. “It’s situational dependent…. There’s a checklist of escalation such as, ‘Is this hostile?’”

In an e-mail to KTUU, Haeg wrote, “I don’t remember specifically stating I would have to be arrested, but if I did it was because I realized I was going to be deprived of my constitutional right to an evidentiary hearing to prove the items above.”

Below is a list of all the items Haeg was going to present that day to prove his corruption case. It is extensive and potentially explains the reason behind the court’s reaction.

While many will look at this situation and say that the police acted appropriately by removing a threat from the court, Haeg noted, correctly, that this is the people’s property. It is also important to point out that Haeg was not getting violent, nor was he a threat to anyone in that court. He was merely speaking to a group of people, past his allocated time, and for this, he was attacked.