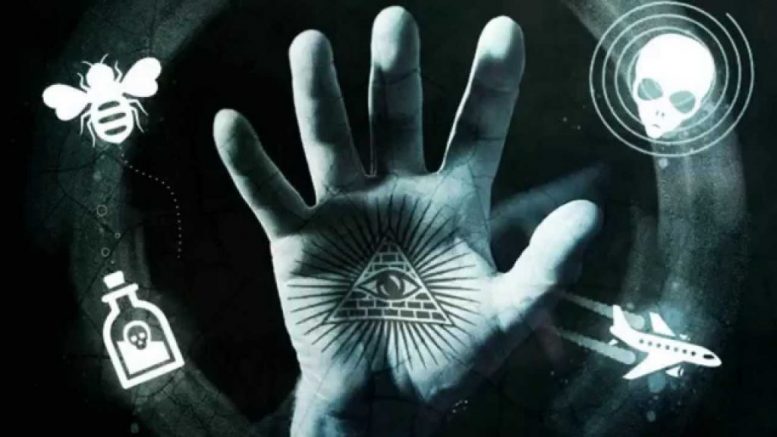 You’re walking through a sea of misinformation, disinformation, lies, speculation, goofball theories—and suddenly, the wise men behind the curtain decide to reach out and hand you unvarnished facts that blow your mind. What’s going on?

We have an entirely new gambit in the UFO disclosure game.

From loudwire.com (Dec.21): “[Musician Tom] DeLonge is currently working with former Pentagon official Luis Elizondo at To The Stars Academy of Arts & Science, which was founded by the ex-Blink guitarist.” This is a new UFO research and merchandising outfit.

DeLonge has taken it upon himself to expose the truth about UFOs. His new partner, Luis Elizondo, used to work for the Pentagon—and, boom, the mainstream press is suddenly telling us that Elizondo headed up a super-secret, $22 million a year Dept. of Defense UFO research group, from 2007 to 2012, the Advanced Aviation Threat Identification Program (AATIP).

According to the NY Times and The Independent, the program had, and still has, metal pieces from a UFO(s), has been studying the pieces, and doesn’t knew what they’re made of.

The press has also just released a 2004 Dept. of Defense jackpot video purporting to show a US fighter jet off the coast of San Diego encountering a UFO, which hovers in place, wiggles, dances around, and suddenly zooms away at a shocking velocity.

The Independent: “Commander David Fravor and Lieutenant Commander Jim Slaight were on a routine training mission 100 miles out into the Pacific when they were asked to investigate the object.”

“Commander Fravor told The New York Times the object was about 40ft long, had no plumes, wings or rotors, and outpaced their F-18s. It was big enough to churn the sea 50ft below it, he said.”

My, my. All these revelations, all of a sudden. Bingo, bango, bongo.

Let all the WHY NOW? speculations begin.

I would point out that, if this is a test to gauge public reaction to: THERE IS LIFE ELSEWHERE IN THE UNIVERSE AND A FEW OF THEM SHOWED UP HERE—the result of the test appears to be, so far: “Are we having the beef stew again tonight?”

This is interesting. People aren’t crowding into the streets and going wild. There are no parades. Presidents of countries aren’t holding major press conferences. I did read a piece about Trump drinking water again and possibly having trouble sipping it.

HELLO? WE AREN’T ALONE IN THE COSMOS.

“That’s nice. Is this Blue Bloods a repeat? I think I saw it a few months ago.”

Another tidbit on the secret Pentagon program: it was brought into being by Nevada Senator Harry Reid. He and a couple of his senate pals managed to divert a little chunk of black budget Pentagon money to set it up. (More yawns from the public.)

Understand: In the press stories of the past few days, there are no leaks. The Pentagon is the source. They’re admitting it. They’re pushing the story. They’re permitting a pilot, who no doubt has been bound by non-disclosure agreements, to go public and talk to mainstream media.

As with all planned releases of this magnitude, there are always “after-analyses.” It’s standard. How did the public respond? What % of the press and the public appear to have bought the story? Are there serious doubters? Who are they? What are they saying?

In this case, the report might read: “Very few people seem to care.”

This in itself is informative. People are on overload. They’re in a trance state below the level where a claimed revelation about Life in the Universe stirs them from their basic hypnotic state. Also, alternatively, many people are so cynical they don’t believe what the government is telling them.

Now, if Robert Mueller can connect a UFO to the Russians, and then to Trump, and the election, more people might respond.

The Pentagon claims it shut down the UFO research program in 2012, because other priorities were more important. Really? They captured a UFO on film doing things in space no craft on Earth can do, and they have pieces of metal from a UFO (how did they acquire them?) which they can’t analyze and are most likely not from this Earth—and yet they shut down the program because it was inconsequential? Nonsense.

One of the point men for spreading the current UFO stories is Ralph Blumenthal of the NY Times.

The Independent: “’They [the Pentagon] have some material from these [UFO] objects that is being studied, so that scientists can try to figure out what accounts for their amazing properties,’ Ralph Blumenthal, one of the authors of the New York Times report, told MSNBC. Mr. Blumenthal said the DoD ‘do not know’ what the materials are made of. It’s some sort of compound they do not recognise,’ he added.”

I have a bit of personal experience with Mr. Blumenthal. In 1993, he wrote a shocking story for the Times about the first bombing attack on the Twin Towers in New York. It focused on an FBI asset and informant, Emad Salem, who asserted that he had been instrumental in putting together the bombing plot. His handlers at the FBI were supposed to supply him with fake bombing materials, so there would be no explosion—however, at the last moment, they gave him actual live material. At the subsequent trial of the defendants, Salem was absent. He didn’t testify.

I got in touch with reporter Blumenthal some years later and asked him what happened to Salem and why he wasn’t allow to tell his story in the courtroom. Blumenthal got angry with me. He told me I didn’t understand his article. And that was that. In my opinion, he was backing away from his own reporting.

So now, with his UFO revelations, I have a few doubts.

It’s likely that, as Tom DeLonge and his Pentagon partner, Luis Elizondo, move forward, promoting their To the Stars Academy (whatever that turns out to be—a movie production company, a school, a store for UFO merchandise), they will be releasing new info on the US government UFO discoveries. So far, no one at the Pentagon is explaining why they’ve decided to make their revelations public now.

The military is not in the habit of doing the public great favors that involve secret programs.

If what the Pentagon is handing over to the mainstream press is legitimate and true Disclosure, it is most certainly a limited hangout on what they really know. And they will to continue to release more info, to see how the public responds, at every step.

But they will also seek to own the story and shape it any way they want to. Through their media fronts, they’ll sculpt the conclusions that “should be made.”

For example, suppose they go as far as this: 50 years ago, they found an alien body at a UFO crash site in the desert. Here are photos. The anatomy of the corpse is definitely not human. Since then, no other alien bodies have been seen, located, or discovered.

True? False? Who would know? Because they are the source of the story. Which is the way they want it to be.

If someone wants us to look at the truth, they disclose all the data and they open up all the files, and they allow us to see the material evidence up close and personal, so independent analyses can be performed. What are the odds that this will happen? When has this ever happened?

If anything, positioning themselves as the central source of the UFO story pushes citizen research into the background. Which is never a good thing.

I fully understand there will be many explanations, offered by many people, about why the Pentagon is releasing this information now. Here is one possibility: the secret program was really a tiny research effort; the Dept. of Defense has actually spent extraordinary amounts of money in this effort, over a long period of time—some of it from the trillions of dollars in the budget “they can’t account for.” Thus, they admit to a $22 million program, as a limited hangout.

Again, THEY WANT TO OWN THE UFO STORY. Going directly to mainstream news with it, where naïve reporters and reporters who are their assets will cover it exactly as the Pentagon intends—this is a major part of what is going on.

The psyop aspect of the Pentagon revelations is all about testing and gauging public response. Imagine that the Dept. of Defense eventually states they did find an alien body decades ago—and then the majority reaction is: “That’s fantastic. Did you see my car keys? I can’t find them.”

Not only would that inform psyop professionals about the UFO reaction, it would also let them know their decades of work, on many fronts, aimed at deadening, overloading, distracting, and shortening public awareness has been an overall success.

The most astounding information barely causes a ripple.

“This is wonderful. In many cases, we don’t have to figure out whether the public believes or doesn’t believe what we tell them. They’re in a state of mind that is ‘lower than belief.’ The majority can’t form beliefs or non-beliefs. They’re firmly embedded in a passive, repetitive, Pavlovian zone…”

In this regard, I refer you to my years of research on the effects of medical drugs, and for starters, my September 13 article, “How many drug prescriptions do doctors write per year?”:

Medical News Today reports that, in 2011, there was a modest uptick in the number of prescriptions written in the US.

The increase brought the total to: 4.02 billion.

Yes, in 2011, doctors wrote 4.02 billion prescriptions for drugs in America.

The Medical News Today article concluded, “…the industry should be heartened by the growth of the number of prescriptions and spending.” Yes, I’m sure the drug industry is popping champagne corks.

A population drugged to the gills is passive…