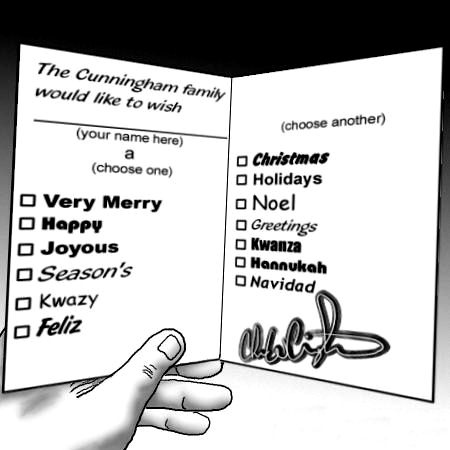 This “Politically-Correct Christmas Story” is my revised version of the story that a faithful FOTM reader, pnordman, sent me years ago. She passed away on April 21, 2015. This post is dedicated to her memory.

And Joseph went up from Galilee to Bethlehem with Mary, his cisgender wife, who was great with child. And she brought forth a son and wrapped him in swaddling clothes and laid him in a manger because there was no room for
them in the inn.

And an Angel of the Lord spoke to the shepherds and said, “I bring you tidings of great joy. Unto you is born a Savior, which is Christ ” — because we don’t want to imply that God is male.

“There’s a problem with the angel,” said a Pharisee who happened to be strolling by. As he explained to Joseph, angels are widely regarded as religious symbols, and the stable was on public property where such symbols were not allowed to land or even hover.

“Also, I have to tell you, this whole thing looks to me very much like a Nativity scene,” the Pharisee said sadly. “That’s a no-no, too.”

Joseph had a bright idea. Eager to avoid sectarian strife, he said, “What if I put a couple of reindeer over there near the ox and ass?”.

“That would definitely help,” said the Pharisee. “Just to clinch it, throw in a candy cane and a couple of elves and snowmen, too. No court can resist that.”

Mary asked, “What does my son’s birth, here in Bethlehem, have to do with snowmen?”

“Snowpersons,” cried a young woman, changing the subject before it veered dangerously toward religion.

Off to the side of the crowd, a Philistine was painting the Nativity scene. Mary complained that she and Joseph looked too tattered and worn in the picture.

“Artistic license,” he said. “I’ve got to show the plight of the haggard homeless in a greedy, uncaring society in winter.”

“We’re not haggard or homeless. The inn was just full,” said Mary. “Furthermore, why is there a languid homoerotically-posed naked man in the Nativity scene?”

The painter said, “He signifies the social justice of clothing the naked!”.

Some bystanders began to protest fiercely.

A transgender said he objected to Jesus’ birth because it implies only women can give birth. A feminist objected to Mary’s virginity because it oppresses women by setting an impossibility high bar for women. Yet another argued that Mary, finding herself pregnant out of wedlock, should have had an abortion because “abortion is a blessing“.

An animal right activist objected to the use of oxen and sheep as picturesque backdrops for the Nativity scene because it carries the subliminal message of human dominance. He passed out two leaflets, one denouncing manger births as invasions of animal space, the other arguing that stables are “penned environments” where animals are incarcerated against their will.

Then a team of child protection advocates descended on the scene, all trained to spot infant abuse and manger rash. The Holy Family were pushed to the edge of the crowd.

Someone said the halo on Jesus’ head was elitist.

Mary became exasperated. To an elderly woman who joined the jabbering mob, she exclaimed, “And what about you? Are you here to attack the shepherds as prison guards for excluded species, maybe to complain that singing in Latin identifies us with our Roman oppressors, or just to say that I should have skipped patriarchal religiosity and joined some new-age goddess religion?”

“None of the above,” said the woman, “I just wanted to tell you that the Magi are here.”

Sure enough, the three wise men rode up.

The crowd gasped, “They’re all male!” and “Not very multicultural!”

“Balthasar here is black,” said one of the Magi.

“Yes, but how many of you are gay or transgender or disabled?” someone shouted.

A committee was quickly formed to find a black, impoverished, but wise lesbian among the halt and lame of Bethlehem.

A calm voice said, “Be of good cheer, Mary, you have done well and your son will change the world.”

At last, a sane person, Mary thought. She turned to see the overly made-up face of a transvestite.