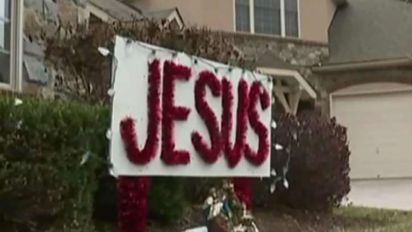 Tolerance is only a one-way street for some people.

From Fox News: A Pennsylvania family was ordered by their homeowner’s association to take down their Jesus Christmas display after one of the neighbors reported it as offensive.

“As part of our Christmas decoration, we would display the name Jesus to point out to everyone that we in this family believe that the reason for the season is to celebrate the birth of Jesus,” said Mark Wivell told FOX43.

“After taking a look at it, it isn’t in accordance with normal Christmas decorations,” Bud Vance, the Courtyards president, wrote in a statement to the Gettysburg Times.

The Wivells also said many others supported their right to display the sign. “When this happened, we were really shocked,” Lynn Wivell said. “We have gotten tremendous support from our neighbors here at the Links and that just makes us feel so good.”

The family said they have no plans to take down the sign until January 15, when the association requires all displays to be taken down. Family members said they are unsure which neighbor was offended.