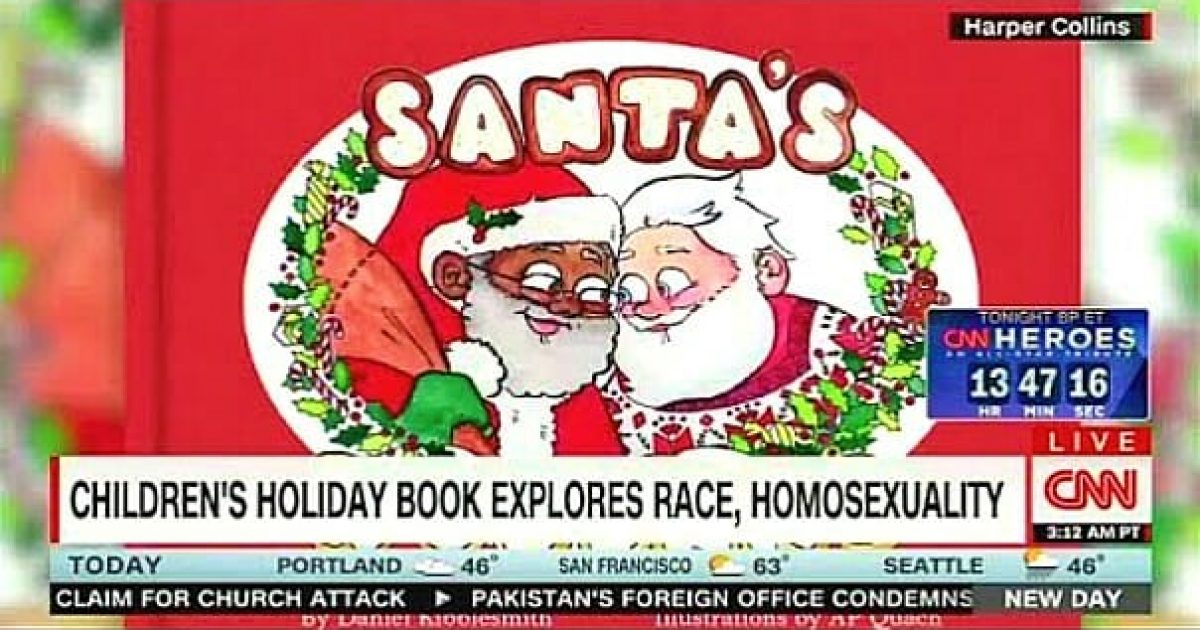 CNN just brought a whole new twist to the “war” on Christmas.

Earlier this week they publicized a new “Christmas” book that portrays Santa as a homosexual man with a husband.

Above a chyron that read, “Children’s Holiday Book Explores Race, Homosexuality,” New Day co-anchor Christi Paul declared the book a “fresh, new twist” and then appeared to lament the fact that “there are some families though, tsk, not so happy about the book’s maybe not so hidden agenda.”

CNN’s Victor Blackwell then interviewed author Daniel Kibblesmith, and illustrator Ashley Quach. The author explained that what inspired the book was “the annual tradition we have in this country of pretending that there’s a giant war on Christmas, and that traditional Christmas is under attack.”

The book is of course targeted at young children, ages 4 – 8, and it is meant to be another tool in the left’s effort to win the culture war against Judeo-Christian beliefs.

Here’s what CNN’s interview misses. The book is proof of the leftist war on Christmas and the author and the illustrator both completely misunderstand what Christmas is actually about.

Santa Claus is modeled on the true historic figure of St. Nicholas who was an early church father known for his philanthropy and he was also known for confronting heresy head-on.

Moreover, we weren’t missing a homosexual, interracial Santa Claus because Santa is not what Christmas is about.

Jesus is what Christmas is about.

Jesus is why we celebrate. If there were no gifts, no trees, no stockings, no lights, no mistletoe… we would still celebrate. Just like the Who’s down in Whoville. Because we don’t need Santa or his reindeer to celebrate the birth of our Savior.

CNN can keep trying to destroy Christmas but they won’t succeed, because our God is Greater and we know what Christmas is really all about. Him.