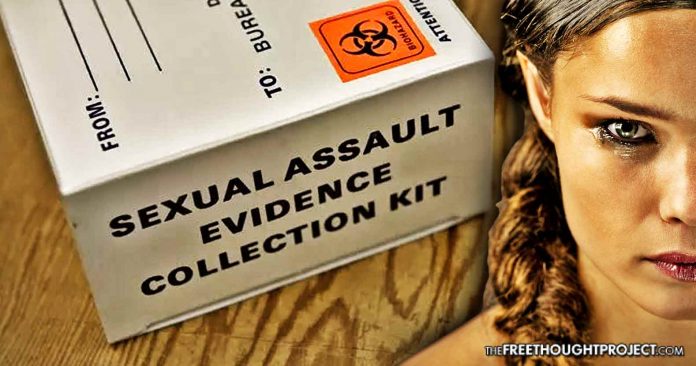 Detroit, Michigan — A team led by Wayne County Prosecutor Kym Worthy has devoted countless hours over the last 8 years to test a backlog of more than 11,300 rape kits that were found in a police storage warehouse. As a result, they have found that nearly 1,000 serial rapists assaulted multiple victims, and because of the inefficiency of Detroit Police, the rapists were never charged.

The prosecutor and her team began tackling the major task of testing each one of the 11,341 rape kits back in 2009. The Detroit Free Press interviewed Worthy to discuss her team’s findings, the most disturbing of which is that there are 817 serial rapists still on the loose who have attacked more than one person. Worthy discussed her county’s plight, as well as the battle the rest of the nation is facing. She said in part:

There are estimated to be 400,000 untested rape kits in the country. In one city, in one county, in one state, we had 11,341…Number one, this problem is a lot more pervasive than people could ever have imagined. Number two [because few victims file a report] that means there is much more sexual assault going on, that it’s much more pervasive than people think. I think nationally the number is about 20% of rapes that are reported, and when you get to the prosecution stage it’s very, very little …  that’s very sobering, very sad and very pathetic.

Worthy then dispelled all doubt about whether or not the majority of the serial rapists assaulted just two individuals. She said many of the 817 have raped almost a dozen or more.

The thought that over 50 individuals have raped more than 10 victims each should come as a wake-up call for the county’s residents, who apparently struggle with an epidemic of sexual assaults taking place on their streets.

Worthy said she is not sure how police should do their jobs to prevent rape crimes, or how they should go about pursuing the perpetrators, but she said that testing the remainder of the rape kits will take another three years. For now, Worthy said she has some ideas on how to hold law enforcement accountable. She believes a rape kit should be tracked just as a UPS package gets tracked and sent from city to city.

“We knew that if you could track a package, when you order something online, you ought to be able to track a rape kit in your own state,” Worthy said.

Michigan State law allows for a 90-day turn-around time on rape kits, but that is clearly not happening—much to the chagrin of rape victims. The prosecutor said the mindset of police investigators is also something that must change. Worthy conveyed one callous phenomenon which must cease:

We reviewed many many police reports where the officers dismissed (victims) because they didn’t act the way they thought they should act… They just closed cases, even cases where I think they believed the victim … They closed cases because the women had worked as prostitutes or had mental illness issues or had substance abuse. Didn’t believe them, didn’t care, and this was one issue that led to the backlog of these kits.

Worthy said that she believes racism is at the heart of the matter. She noted that when it comes to people of color—basically anyone who is not Caucasian—their cases are handled differently. She told the Free Press:

One of the reasons we have these untested rape kits … and I can use Detroit as an example, 86% of our victims in these untested kits are people of color. You’re not going to find too many blond-haired, blue eyed white women … Because their kits are treated differently, their cases are solved. That’s just the way it is in this country. If you’re a person of color, if you’re a different economic class, then your case across the board, across the board, not just sexual assault — they’re treated differently.

Worthy said that when it comes to the serial rapists in Detroit, their activities can be traced to at least 39 other states in the country. Worthy said testing each and every kit can help solve violent crimes as well, such as homicides connected to the rapes.

The fact that when you get these kits tested…once these hits get into CODIS (the FBI’s Combined DNA Index System database), law enforcement can solve more than just sexual assault. They can solve homicide, can solve breaking and entering, because the crimes in other states we’re talking about are not just sexual assault.

Worth told the Free Press that the crime of rape has been pushed to the back burner, nearly forgotten, and incredibly underfunded, with one previous administration asking the city to look for outside funding to test the rape kits.

No one would be saying this, and you wouldn’t even have to ask that question, if we were talking about homicides. You may not have the resources, may not be able to tackle all of these cold cases, but given the resources … no one turns their back on a cold case homicide. So we wouldn’t even have this discussion … but because it’s sexual assault, for whatever reason, it’s very easy for some folks to sweep this under the rug.

Worthy’s comments underscore a pervasive problem in the United States, as tens of thousands of rape kits remain untested across the country. The fact that many of the assaults are being committed by serial rapists is alarming, confirmed by Wayne County’s own findings, which could be a representative sampling of the nation.

Even more disturbing to individuals following the reports of unprocessed rape kits may be the fact they are being treated like a nuisance—an unwanted and inconvenient expenditure for law enforcement agencies who seem much more concerned with jailing potheads than arresting serial rapists.

The following video is from 2016, when the number of serial rapists was below 800. This is Wayne County prosecutor Kym Worthy addressing the issue: