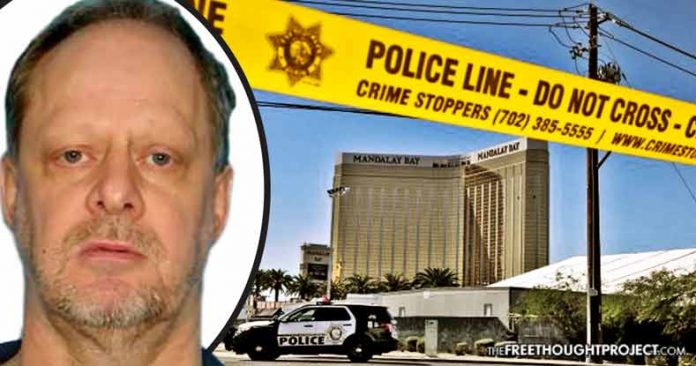 Las Vegas, NV — Strangely, almost three months after the the deadliest mass shooting in recent U.S. history, authorities have still not announced a motive for the massacre, nor have they officially released a single image of the alleged shooter, Stephan Paddock, in Las Vegas prior to the incident.

What makes this seem odd is the fact that Las Vegas, and more specifically the Vegas strip, is arguably one of the most intensely surveilled places on the planet. This surveillance makes the fact that there has been no footage, not even a still image of Paddock in the Mandalay Bay, seem extremely suspicious.

Just this week, the Las Vegas coroner’s office confirmed that Paddock died of a reported self-inflicted single gunshot wound to the head. Also, amid their deafening silence on the matter, the only thing authorities have announced is that there would likely not be a motive released until next October — a full year after the shooting took place.

“Now that’s a long time for some people, but speaking for the FBI, that’s light speed, all right?” Aaron Rouse, Special Agent in Charge, told the Las Vegas Review-Journal on Wednesday.

Rouse said reports from other agencies investigating the mass shooting will be released at different times, but the FBI’s one is “focusing a large part on the why” which is “what everybody wants to know.”

Rouse told the Las Vegas Review-Journal that the FBI has interviewed around 400 people worldwide in connection to Paddock and has brought in the same number of specialists to help document evidence. He said the Route 91 Harvest music festival site took investigators 14 days to comb over, while Paddock’s room and hotel hallway at the Mandalay Bay Resort and Casino took 13. Important items found at both sites have been sent to the FBI’s central lab in Virginia.

He added that FBI investigators have 22,000 hours of surveillance and cellphone footage and 250,000 photos to look over, amounting to about 40 terabytes of data.

“We didn’t leave anything uncovered,” Rouse told the Las Vegas Review-Journal. “And again, the casinos, with their support, let us track down a lot of information of who may have had contact with that person. And it was very helpful to us.”

Given the public’s thirst for information about the incident, and the numerous conspiracy theories surrounding the massacre — some of which were discovered to be promoted by a PR firm hired by the parent company of the Mandalay Bay Casino — it seems odd that there has not been more transparency during the investigation.

The scant information released by investigators indicates that Stephen Paddock, 64, who by all accounts was independently wealthy and a Vegas high-roller, opened fire on a music festival from a 32nd-floor hotel room at the Mandalay Bay Casino.

The massacre left 58 dead and 546 injured, yet nearly three months later and there are still few answers – even to the most basic of questions.

Previously, The Free Thought Project brought forth a number of facts that seem to raise more questions than answers:

So the question remains as to whether there is a tight-lipped, professional, investigation taking place, or a thorough cover-up in action.

The complete silence from law enforcement, in such a high-profile case, raises some serious questions about the potential for some type of cover-up taking place.

Why is there no investigative coverage of Vegas shooting by major media organizations?

Why did the story simply vanish from the news cycle with so much public interest and so many unanswered questions?

The fact that there have been virtually no answers to any of the questions that have arisen from the official story not adding up, while simultaneously being blacked out by the mainstream mass media, could potentially indicate an intentional soft-censoring of the Vegas mass shooting… the only question is why?

Please share this important information. Let us know what you think is going on in the comments!