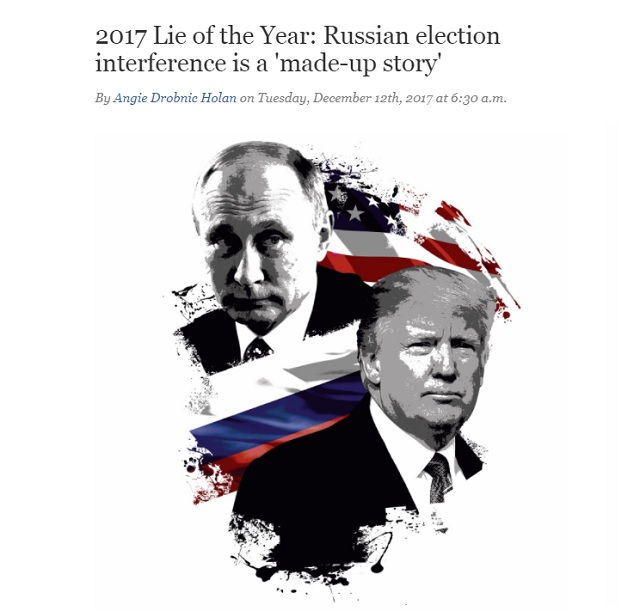 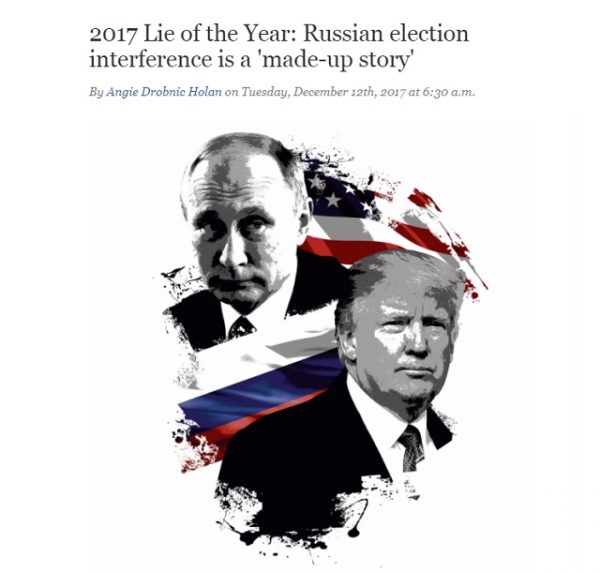 The political hacks at PolitiFact named their “Lie Of The Year” for 2017 President Trump’s accurate claim that Russian election interference is a “made-up story.”

While the claim is subjective and Trump was speaking in broad generalities as he always does, that didn’t stop PolitiFact from “fact-checking” it with all the self-righteous, sniveling, liberal fervor they could muster.

A mountain of evidence points to a single fact: Russia meddled in the U.S. presidential election of 2016.

In both classified and public reports, U.S. intelligence agencies have said Russian President Vladimir Putin ordered actions to interfere with the election. Those actions included the cyber-theft of private data, the placement of propaganda against particular candidates, and an overall effort to undermine public faith in the U.S. democratic process.

Remember how the media said it was “all 17 intelligence agencies” for months on end only to later admit that was a big fat lie?

That should be lie of the year.

Members of Congress, both Democrats and Republicans, have held open and closed door hearings to probe Russia’s actions. The congressional investigations are ongoing.

Facebook, Google and Twitter have investigated their own networks, and their executives have concluded — in some cases after initial foot-dragging — that Russia used the online platforms in attempts to influence the election.

Who gives a sh*t? One candidate was threatening Russia with a nuclear war while the other was advocating for peace. This is a non-story, a “made-up” story, one might say.

After all this, one man keeps saying it didn’t even happen.

“This Russia thing with Trump and Russia is a made-up story. It’s an excuse by the Democrats for having lost an election that they should’ve won,” saidPresident Donald Trump in an interview with NBC’s Lester Holt in May.

Remember when PolitiHack said Obama’s claim that you can keep your health care plan was entirely true? That was during the 2008 election.

After Obama got reelected, in 2013 they later said his claim you could keep your health care plan was the “lie of the year.”

(Check out some more of their greatest hits here.)

It sure would have been nice if they reported the truth the first time, though I guess that wouldn’t have furthered their political agenda.

On Twitter in September, Trump said, “The Russia hoax continues, now it’s ads on Facebook. What about the totally biased and dishonest Media coverage in favor of Crooked Hillary?”

Yeah, what about that? Are you going to fact-check the media colluding with Clinton as was shown by Wikileaks?

And during an overseas trip to Asia in November, Trump spoke of meeting with Putin: “Every time he sees me, he says, ‘I didn’t do that.’ And I really believe that when he tells me that, he means it.” In the same interview, Trump referred to the officials who led the intelligence agencies during the election as “political hacks.”

Let’s just ignore all the new revelations from the Mueller witch-hunt and Peter Strzok’s texts.

Trump continually asserts that Russia’s meddling in the 2016 election is fake news, a hoax or a made-up story, even though there is widespread, bipartisan evidence to the contrary.

When the nation’s commander-in-chief refuses to acknowledge a threat to U.S. democracy, it makes it all the more difficult to address the problem. For this reason, we name Trump’s claim that the Russia interference is a hoax as our Lie of the Year for 2017.

The number one threat to our Republic is the fake news media colluding with the deep state to overthrow our democratically elected president and overturn the will of the American voter.

As Peter Strzok’s texts showed, this Russia hoax was nothing more than a deep state “insurance policy” to derail Donald J. Trump’s presidency on the off chance he won the 2016 election.

In the new year, we need to start throwing these criminals in prison.