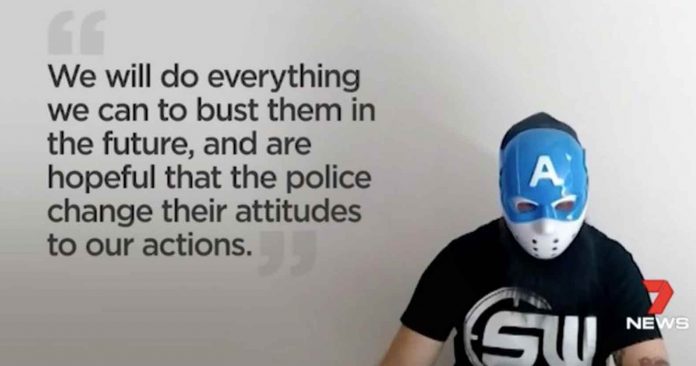 After he became fed up with police officers doing a terrible job at catching child predators, Rich Warner took matters into his own hands. He launched a sting operation of his own and was successful at catching pedophiles. However, he apparently became so good at his job that police have moved in to take him out.

Using fake profiles, Warner would lure in these predators. He would set up meetings and then confront the sickos who would show up. Many of Warner’s stings have been the subject of high-profile news segments in which he’s nabbed child predators who thought they were going to meet children for sex.

As Yahoo reported in August, in one of Warner’s stings, Mark Lee Smith arranged to meet the 14-year-old, known as Lou, after grooming her on an online dating site, but instead he found himself face-to-face with an undercover journalist using the alias “Danny Catcher” (Warner) who detained the 28-year-old father of one and called the police.

Smith is a repeat offender and had previously pleaded guilty to charges between June 19 and 23 of causing or inciting a child to engage in sexual activity and attempting to meet a child following sexual grooming. By all measures, Warner’s actions protected other children.

Speaking after Smith’s arrest, Warner said,  “I think it sends a strong message to people thinking about talking to or meeting children online. There is always a risk that the child could be a pedophile hunter and I sincerely hope my work stops people risking meeting to or talking to children online.”

And he is right. However, after hunting pedophiles and finding himself the subject of so many news segments, Warner has turned from hunter to the hunted. Police have now charged Warner with aggravated assault and publishing the identity of a person charged with a sex offense.

Although police called him a vigilante, Warner denies this allegation as he has merely made citizen’s arrests and turned the pedophiles over to police.

“I was interested to see how many were out there and how many would respond, and I was shocked,” Warner said of the horrific problem that is pedophilia.

Because police are too busy squandering taxpayer money and resources enforcing the drug war, this problem of pedophilia thrives. So, people like Warner set out to try and stop it.

Warner, who is a father himself, bravely said the arrest and charges will not deter him in the future and he posted an unrepentant message to YouTube following the news.

“We will do everything we can to bust them in the future and are hopeful that the police will change their attitudes to our actions,” he stated.

Naturally, many folks on social media do not see it from the perspective of police and are calling this move an injustice.

“(Warner) Should be given a medal, a handshake,” one Facebook user wrote, while another said: “The man should be celebrated, not arrested.”

Sadly, however, police are using Warner’s arrest as a warning to other folks who would dare try to prevent pedophiles from going after children. They told 7 News that if anyone else dares to take the law into their own hands, they will prosecute.

“Pass on any information you have to police,” Det Supt Mark Wieszyk said. “Don’t take this on board yourself.”

However, this is what Warner was already doing. Warner was not taking it on himself. He was merely catching these people and handing them over to police. Had Warner been killing these people with no due process, then he certainly deserved to be stopped as even the vilest of criminals deserve due process.

For helping to get pedophiles off the streets, Rich Warner will now stand trial in February.

In the meantime, pedophiles can rest easy knowing that police have stopped at least one man from trying to expose them.