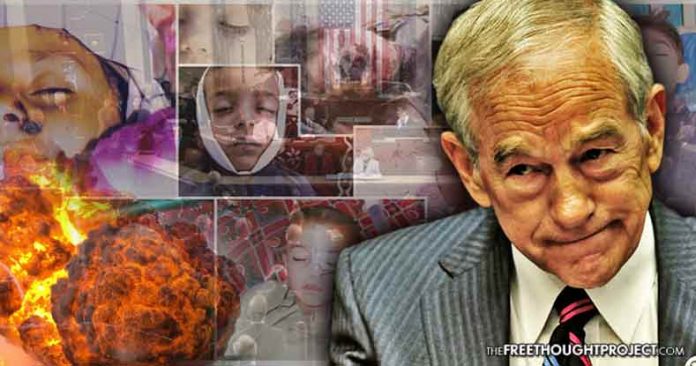 In a weekly column, put out on Christmas day, Ron Paul delivered a scathing report on how political immorality is the norm and not the exception. Given the recent revelations over the millions spent in taxpayer dollars to silence the sexual abuse victims of federal politicians, Ron Paul noted that Americans shouldn’t be surprised those who spend their lives at your expense defending immoral wars and engaging in horrifying abuse would also engage in immoral personal conduct.

“It is only natural that an immoral system, like the welfare-warfare state, tends to attract individuals likely to practice personal immorality,” wrote Paul.

Going further to blow the lid off of the cesspool that is DC, Paul explained how the welfare-warfare state is built on a foundation of theft and corruption. Paul notes that while some taxation may be necessary to fund a few legitimate government functions, taking people’s money to give away through domestic and corporate welfare at home and funding a global empire through illegal wars abroad “is nothing more than theft.”

Going even further into his epic Christmas day rant, Ron Paul explained that this entire immoral system of theft and war is held together through the state’s monopoly on the initiation of force—violence.

Every law preventing us from living our lives as we choose — whether forbidding us from working for below minimum wage, preventing us from smoking marijuana or drinking raw milk, telling private business owners who can and cannot use what restroom, or requiring us to purchase government-approved health insurance — rests on the threat of force being used against those who refuse to obey.

Indeed, he is absolutely correct as police in America demand your obedience to the state through the threat of violence. If you doubt this claim, try not paying a ticket for a victimless crime like window tint. If you fail to pay your extortion fee, you will be issued a subpoena to show up in court. If you do not show up in court, a warrant will be issued for your arrest. You will then be kidnapped and locked in a cage. If you resist the armed men kidnapping you for refusing to be extorted over window tint—you will be killed.

Such a long-standing reliance on violence to solve problems has led to a system of endless war and domestic oppression.

The neocons and “humanitarian interventionists” who control our foreign policy have disregarded the wisdom of the Founders. They actually promote endless wars not to protect our security but to promote “democracy” and “universal human rights.” They are impervious to evidence of the failure of military interventions to achieve these goals and indifferent to the human and fiscal costs of endless war. They dismiss the loss of innocent lives — including the deaths of children — as unavoidable “collateral damage,” while using their influence in the media to spread pro-war propaganda. They also smear their opponents as aiding America’s enemies and sympathizing with terrorists.

Sound familiar? It should. the above paragraph summarizes the foreign policy of all our recent presidencies, including the current one.

The reason this system is allowed to continue, according to Paul, is that no one wants to admit it is broken. No politicians—other than a very select few, like Paul—are willing to admit that the system they uphold is immoral and a failure.

Therefore, defenders of the welfare-warfare state rely on lies and deceptions. They ignore all evidence of the failure of big government to accomplish its ends, instead pretending they can fix the system with a few reforms.

When those who dare speak truth to this immoral power, they are shouted down by the establishment’s Praetorian Gaurd in the mainstream media, who, as Paul notes, promulgate the lie that without the welfare state the masses would remain poor and uneducated, and without the warfare state we would be overwhelmed by those who hate us for our freedoms. Never does the media mention the fact that these enemies abroad hate Americans—not for our freedoms (or lack thereof)—but for America’s foreign policy which lays waste to their lives and the lives of their children.

Ron Paul remains optimistic, however, hoping that these recent allegations of rampant sexual misconduct within the political elite serve as a wake-up call to those who continue to ignore this failed and violent system.

The welfare-warfare state is built on violence and deceit. It is thus inevitable that many of those participating in this immoral system will combine their immoral politics with immoral personal conduct. Hopefully the revelations of sexual misconduct among the welfare-warfare state’s Capitol Hill and media defenders will lead more Americans to question the morality and the wisdom of allowing the federal government to run the world, run the economy, and run our lives.