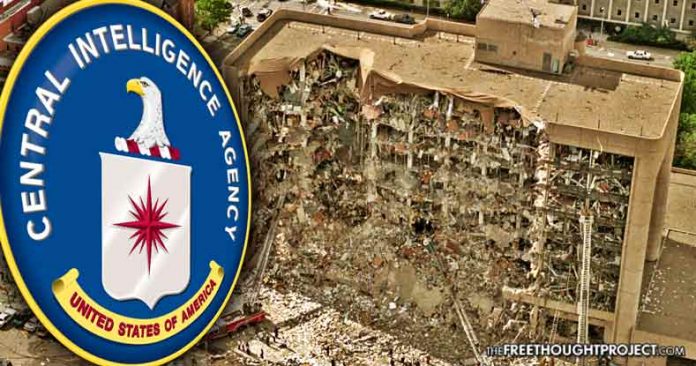 Oklahoma City, OK – In what can only be described as a bombshell revelation, a former independent black ops contractor, Cody Snodgres, recently blew the whistle on a plot in which he alleges that he was offered $1 million from a CIA contact to bomb the Alfred P. Murrah Building in Oklahoma City — prior to the deadly bombing of the federal building on April 19, 1995.

“For over 20 years, I was an Independent Contractor (IC), specializing in sensitive, covert assignments, as well as bodyguard work. In 1994 I was given the task to blow up the Alfred P. Murray building in Oklahoma City. This job came from an x-US military man, who told me he worked covertly for CIA. I refused on moral grounds. My strong opposition to attacking U.S. citizens on our own soil changed my status from a CIA asset into a liability, a private, Independent Contractor who ‘knew too much’”.

In radio interviews on December 4 and 5, Snodgres, who subsequently refused the offer to blow up the Alfred P. Murrah Federal Building, gave testimony that detailed the nefarious offer.

Ironically, Snogres was in a near-fatal car accident only hours after his whistle-blowing radio appearance, according to reports.

Snodgres left an audio message after the crash with further details.

While it may seem like the stuff of Hollywood spy movies to intimate that the two-car collision, in which both vehicles were reportedly totaled, was an assassination attempt, it is indeed a means to an end by the state. A little research into the case of reporter Serena Shim, who was the first journalist to report on links between ISIS and the Turkish government, and who was killed in what was reported to have been a car accident—but that most analysts suspect was an assassination by vehicle—reveals intelligence assassinations being carried out in this exact manner.

During the interview, Snodgres goes on to discuss both the Clintons and Bushes involvement in drug trafficking, Iran Contra, and numerous other dastardly misdeeds undertaken by the federal government.

Interestingly, Snodgres stated that he waited for Hillary Clinton to be gone from the U.S. political scene before coming forward with the allegations.

Please listen to the riveting interviews below:

As TFTP has previously reported, Snodgres had every reason to remain silent as another whistleblower, who was a cop, was silenced for his role in exposing the OKC bombing.

Instead of being treated as the hero he truly was, Sgt. Terrance Yeakey was silenced by his own government in an effort to keep him from exposing their complicity in one of the largest mass murders in American history – which senselessly ended the lives of 168 people, including 19 children.

According to his widow, instead of being showered with accolades by the US government for his heroism, Yeakey was killed, with his death being framed to look like a suicide (although a very poorly staged one) only days before receiving the police department’s Medal of Valor for his heroic rescue efforts on day of the Oklahoma City bombing.

On May 11, 1996, only days after his Yeakey’s death, the New York Times ran a story with the headline – ‘A Policeman Who Rescued 4 in Bombing Kills Himself’. But the bold assertion that hero cop Sgt. Terrance Yeakey killed himself couldn’t be further from the truth.

Sgt. Yeakey’s body was found in a field in El Reno, OK, over a mile away from his abandoned vehicle. There was an extremely large amount of blood found in his vehicle, he had been bound, had rope burn on his neck, ligature marks on his wrists, numerous deep cuts, likely tortured and killed execution-style with a single bullet that entered his right temple at a 45-degree angle. To top it off, no gun was found at the scene of his death — until an FBI agent showed up and suspiciously found a gun in an already thoroughly searched area within 5 minutes of being there.

The real story behind Yeakey’s death, as attested to by his ex-wife, Tonia Yeakey, is that he witnessed things during his response to the bombing which did not agree with the ‘official version’ of events being forwarded by law enforcement and national media at that time and began collecting evidence to support his contentions.

In an interview on AM1300 KAKC, in 1998, Tonia Yeakey clearly exposes the reality underpinning the death of Terrance Yeakey. The extremely important interview with Tonia Yeakey can be heard in the video below — and begins at the 8-minute mark (please watch):