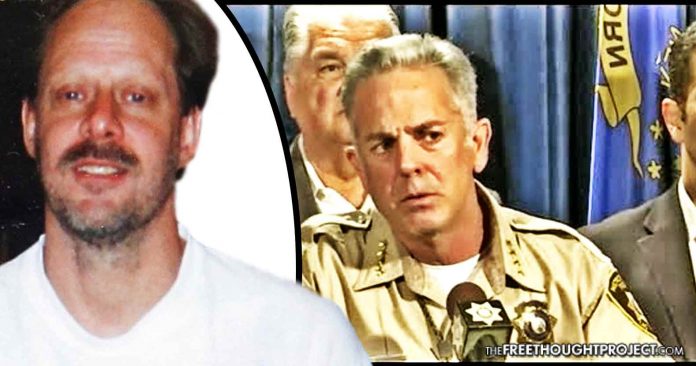 Las Vegas, NV — As conspiracy theories run rampant online and in the media about the who, what, and why of the deadliest mass shooting in recent American history, a documentary has just revealed some incredibly telling information. In the new film, police are exposed for covering up the details of the shooting—because the casino allegedly paid them to.

Since the horrific massacre took place nearly three months ago, details and evidence presented by law enforcement have been scant at best. This is not a coincidence. One of the most telling details about the information in this case is the complete and literal blackout of any images or video that show Stephen Paddock in the Mandalay Bay casino.

While there has been much speculation as to why no video has been released, the documentary now provides an answer—the casino is playing a massive game of CYA (cover your ass).

The new film, titled, “What Happened in Vegas,” explores the role of the Las Vegas Police Department covering up the details of the shooting—for the sole benefit of their bosses in the casino. As to why the police department would deliberately keep secret what is likely the most sought-after information of 2017, the documentary explains that they are in the pocket of the casinos who would be liable for tens of millions in lawsuits because they failed to stop Stephen Paddock from killing 58 people that fateful night.

As Raw Story notes, at the root of the problem, the film explains, is that the LVPD is run by a sheriff elected in large part by donations from MGM, the corporation that runs the Mandalay Bay hotel. According to the documentary, Las Vegas police changed their story multiple times on the timeline of the shooting. One important detail the police lied about in several instances is the timing of Paddock’s shooting of security guard Jesus Campos. Why? It’s likely that the LVPD wanted to help the casino’s legal case, and if they claimed Campos was shot while trying to prevent Paddock’s rampage, as opposed to during or after, it could help the casino’s lawyers later claim that the Mandalay Bay had taken sufficient action to stop him. At least seven news organizations have since sued the LVPD for failing to release all the information from the night of the shooting, including the New York Times, the Associated Press, ABC, the Washington Post and the Los Angeles Times.

According to Stephen Stubbs, an attorney representing some of the victims in the shooting, Paddock was able to kill so many people that night because the casino treated him differently because he was a high roller. Instead of calling 911 when the shooting began, the casino called their “special back number” to a private wing of the police department in an attempt to keep the incident under wraps.

Because Paddock was a regular high roller at the casino, Mandalay bay didn’t call 911 and so dispatch was not able to link the shooting inside the hotel with the shooting a the Route 91 music festival.

Given this information, the pieces of the puzzle now fall into place. As TFTP has previously reported, because of his high roller status, Paddock was also granted special privileges at the casino—like access to the service elevator.

One of the most asked questions about the massacre in Las Vegas was, “How did Stephen Paddock get hundreds of pounds of ammo and nearly two dozen assault rifles into his suite on the 32 floor of Mandalay Bay without anyone noticing?” Well, now we know—he was allowed to use the service elevator.

The fact that Paddock had access to the elevator, coupled with the fact that a special back line to police was called instead of 911—the casino now becomes complicit in allowing so many people to die that night.

We now have a motive for the parent company of the Mandalay Bay Resort and Casino, MGM Resorts International, for paying a crisis management firm, Joele Frank, to spread disinformation about the massacre online. It keeps people confused so no one looks at them.

As TFTP noted at the time, the conspiracy theory report details how MGM International hired Joele Frank to run damage control in the wake of the deadly attack that left 58 people dead on Oct. 1. Michael’s report subsequently exposes ties between the crisis management firm and numerous Twitter accounts posting clearly bogus conspiracy theories about the mass-shooting, claiming “the shooting was fake, there was no blood, no victims, crisis actors, the whole nine-yards.”

While all this information helps us to put the cover up of the shooting by police into perspective, Stubbs delves further and offers up a convincing theory as to why Paddock did what he did. “From what I understand, Stephen Paddock did this because he wanted to hurt these casinos financially, and this was the best way he knew how.” However, because the casino responded the way they did, they became complicit in the death toll. “It didn’t have to be this bad,” Stubbs said, noting, “if they would have treated him like anyone else.”