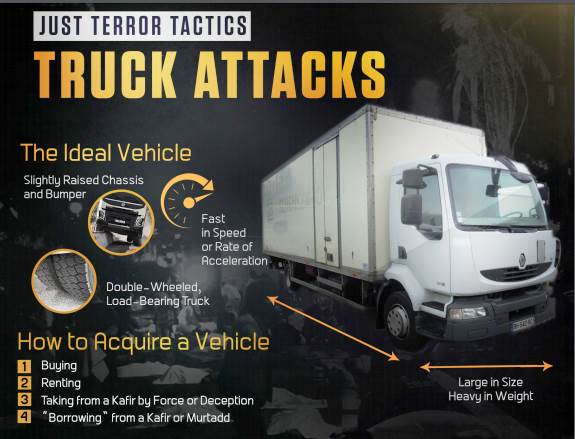 Mohamed Yussuf Jama’s 2016 Freightliner Cascadia slammed into cars on Interstate 55 with “no attempt to stop,” Dye said. The cars were slowed or stopped in traffic, ahead of the truck. The semi ran over some vehicles.

“This is one of the worst crashes some of us have ever seen,” Dye told the Illinois paper.

Has America become so crippled by sharia that jihad attacks are now scrubbed of motive? Will devout Muslims waging war in the cause of Allah escape prosecution so as not to appear islamophobic like Minneapolis cop Mohamed Noor, who killed an unarmed, pajama-clad woman at point blank range and has faced no consequence?

Is it out of the realm of possibilities that this Muslim truck driver was following jihadi directives?

via Police: Greeley man behind wheel of truck in 8-vehicle crash that killed 4 | GreeleyTribune.com

HAMEL, Ill. — Illinois State Police say a Colorado man was the driver of a truck that crashed into several vehicles on Interstate 55 in southwestern Illinois, killing four people.

Police spokesman Calvin Dye Jr. says 53-year-old Mohamed Yussuf Jama of Greeley was driving the tractor-trailer when it crashed into vehicles that had slowed or stopped in a construction zone near Hamel on Nov. 21.

Dye told the Belleville News-Democrat that no citations had been issued to Jama as of Saturday. An investigation was continuing.

Jama’s 2016 Freightliner Cascadia slammed into cars on Interstate 55 with “no attempt to stop,” Dye said. The cars were slowed or stopped in traffic, ahead of the truck. The semi ran over some vehicles.

“This is one of the worst crashes some of us have ever seen,” Dye told the Illinois paper.

Hamel is about 30 miles northeast of St. Louis.