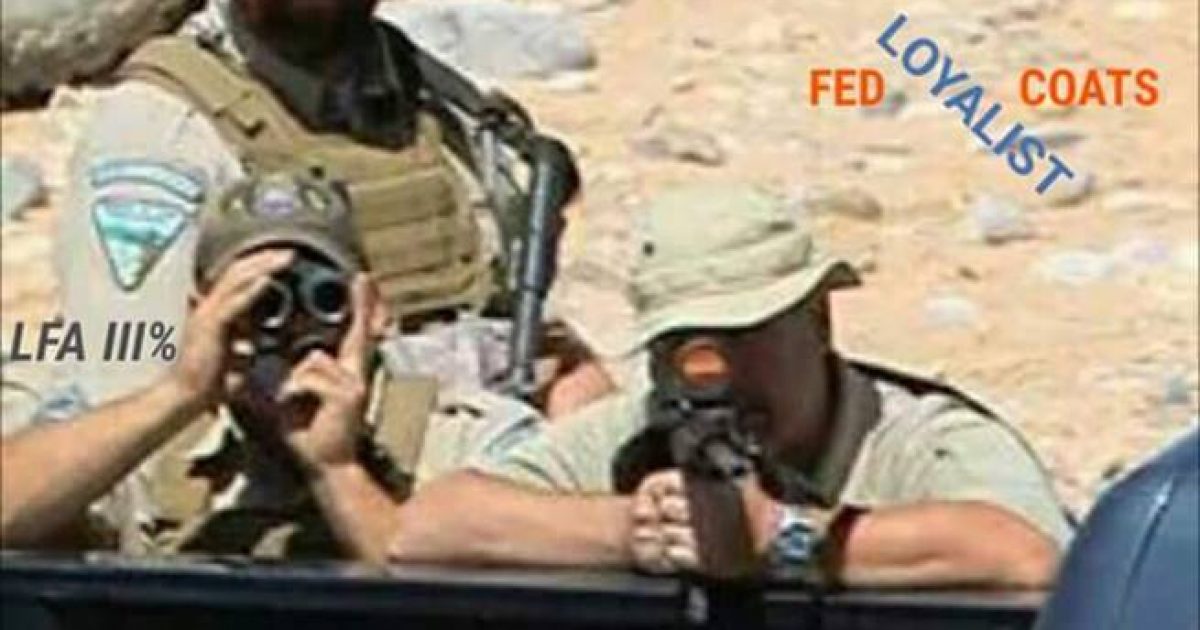 While we wait to see what the next step in the Bundy Ranch standoff trials will be, following the judge’s ruling a mistrial, leaked video has surfaced that clearly demonstrates that the agents of the Bureau of Land Management did not want to follow the commands of Sheriff Joe Lombardo concerning their brandishing of long guns in 2014.

The video was released by Resurrect The Republic Truth Media and speaks for itself.

Note what is said and the time stamps.

Sheriff Lombardo is clearly the one attempting to de-escalate the situation, while BLM Special-Agent-in-Charge Dan Love seems to be more concerned with bossing everyone around.

Lombardo tells the BLM agent to “back up” and that they “don’t need all those long guns.”

Later in the video, you will hear one of the BLM agents state that they “don’t take orders from that officer.”

However, clearly, there was way more hardware out at Bundy Ranch in 2014 than protesters had, and yet, the prosecution has attempted to portray the poor agents of the BLM as victims and the protesters as domestic terrorists.

“Earlier this year, another member severely criticized me on the House floor for declaring on C-SPAN that, indeed, many Americans justifiably fear their own government,” Paul began. “This fear has come from the police state mentality that prompted Ruby Ridge, Waco and many other episodes of an errant federal government.”

“Under the Constitution, it was never meant to be a federal police force,” Paul continued. “Even and FBI (Federal Bureau of Investigation), limited only to investigations, was not accepted until this century.”

“Yet, today, fueled by the federal government’s misdirected ‘war on drugs,’ radical environmentalism and the aggressive behavior of the ‘Nanny State,’ we have witnessed a massive buildup of a virtual army of armed regulators prowling the states where they have no authority,” he added.  “The sacrifice of individual responsibility and the concept of local government by majority of American citizens has permitted the army of bureaucrats to thrive.”

Paul then cited an article by Joseph Farah, then director of the Western Journalism Center of Sacramento, CA, which appeared in the Houston Chronicle.

“The surge in the number of armed Federal bureaucrats has been brought to our attention,” Paul paraphrased. “Farah points out that in 1996 alone, at least 2,439 new Federal cops were authorized to carry firearms. That takes the total up to nearly 60,000. Farah points out that these cops were not only in agencies like the FBI, but include the EPA, U.S. Fish and Wildlife, and the Army Corps of Engineers. Even Bruce Babbitt, according to Farah, wants to arm the Bureau of Land Management.”

Farah logically asked, “When will the NEA have its armed art cops?”

“It is ironic that the proliferation of guns in the hands of the bureaucrats is pushed by the antigun fanatics who hate the second amendment and would disarm every law-abiding American citizen,” the Texas Congressman continued. “Yes, we need gun control. We need to disarm our bureaucrats, then abolish the agencies. If government bureaucrats like guns that much, let them seek work with the NRA.”

Paul then warned, “Force and intimidation are the tools of tyrants. Intimidation with government guns, the threat of imprisonment, and the fear of harassment by government agents puts fear into the hearts of millions of Americans.”

Well, we now have seen a massive amount of ammunition being solicited for by various federal agencies, from the Social Security Administration to various departments under the authority of Homeland Security to agencies such as DOC, NOAA, NMFS, OLE, and NED.

Even the postal service is in on the purchase of guns and ammo, while the IRS trains with AR-15s.

Ron Paul has been warning America for decades of its foolish decisions regarding monetary policy, foreign policy and, yes, the growing tyrannical police state.

It would have been nice if America had listened then before these agencies grew to the size they are now with a chip on their shoulder.

In 2014, we saw exactly what he was talking about.