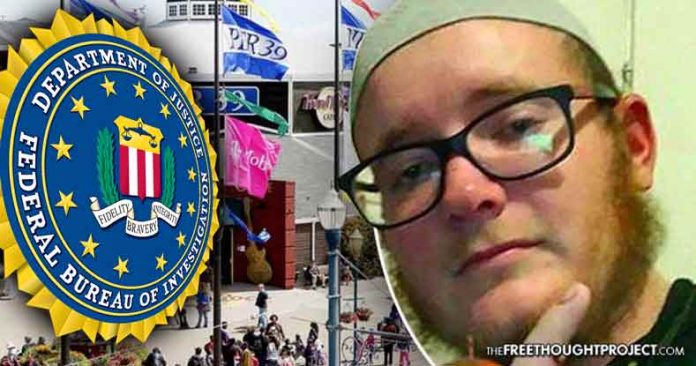 It is no secret that agents from the Federal Bureau of Investigation often look for and take advantage of vulnerable individuals on the internet by gaining their trust and convincing them to carry out attacks—but even in a case where the “terrorist” backed out of the attack, the mainstream media is still celebrating the FBI’s diligence in the War on Terror.

“FBI thwarts alleged plan to carry out terrorist attack in San Francisco on Christmas,” the Washington Post reported, claiming that the agency was able to prevent “a possible terrorist attack at San Francisco’s Pier 39 after arresting a man who told undercover agents he wanted to carry out an Islamic State-inspired suicide bombing at the popular tourist destination on Christmas Day.”

The New York Post joined in with the headline “FBI thwarts ISIS-inspired Christmas terror attack on San Francisco,” and the claim that the suspect was “former US Marine sharpshooter” Everitt Aaron Jameson, 26, who was discharged from the military for fraudulent enlistment, and now works as a tow truck driver.

The Department of Justice released a statement confirming that Jameson has been arrested for “attempting to provide material support to a foreign terrorist organization.” If convicted, he faces up to 20 years in prison and $250,000 in fines.

“According to court documents, Jameson had several online interactions with a confidential source in which he expressed support for the October 31, 2017, terrorist attack in New York City and offered his services for ‘the cause.’  In subsequent communications with an undercover agent, Jameson referred to his training in the U.S. military and noted he had been trained for combat and war.  Jameson later met with another undercover agent whom he believed to be associated with the senior leadership of the foreign terrorist organization, ISIS (the Islamic State of Iraq and al-Sham, also known as ISIL).  During his interactions with this undercover agent, Jameson offered to carry out violent acts and to provide financial support for the terrorist organization.”

Now, the question is—how did FBI agents find Jameson, and did he actually pose a threat of carrying out a terrorist attack?

The Los Angeles Times reported that Jameson began studying Islam one year ago, after he became “depressed and even suicidal over losing custody of his children.” However, his family insisted that he did not have violent tendencies, and had never mentioned anything about becoming involved with the Islamic State.

“He just ain’t no terrorist, no way,” Jameson’s father said. “He would never hurt people. Not ever. It’s just unbelievable. That’s not who he is.”

The criminal complaint filed against Jameson claimed that he first caught the agency’s attention when a “credible FBI Confidential Human Source” flagged his Facebook account as suspicious on Sept. 19, for “Liking” and “Loving” posts that were “pro-ISIS and pro-terrorism.”

“To provide an example of the types of posts Jameson was ‘Liking’ and ‘Loving’ during this time period, the CHS reported to the FBI that Jameson “loved” a post on November 29, 2017 that is an image of Santa Claus standing in New York with a box of dynamite. The text of the post reads, ‘ISIS post image of Santa with dynamite threatening attack on New York.’ The Propaganda poster shows Santa Claus standing on a roof next to a box of dynamite looking out over a crowd of shoppers with the words ‘We meet at Christmas in New York… soon.’ Under this post, Jameson selected the ‘Like’ option and then selected the “Heart” option to signify that he ‘Loved’ the post.”

However, the fact that Jameson “liked” a post on Facebook about an ISIS attack in the United States on Christmas day, does not guarantee that he would have actually carried out such an attack by himself.

While the complaint does detail the conversations Jameson had with FBI informants, and it shows that he appeared eager to provide supplies for an attack on a crowded area, and willing to carry out, he was never in contact with a suspected member of ISIS.

It is also important to consider the context. FBI informants were holding bait in front of a depressed, suicidal man, and were giving him a sense of attention and companionship that he was likely lacking in his own life. Ultimately, two days after meeting with FBI informants in person, the criminal complaint noted that Jameson sent a message on Dec. 18, saying, “I don’t think I can do this after all. I’ve reconsidered.”

It was too late. Even though he had not harmed anyone, and had declined to carry out the attack the agents were trying to talk him into, the FBI obtained a search warrant for Jameson’s home the next day. They seized a letter signed by “Abdullah Abu Everitt,” a last will and testament, and a series of weapons including “a Winchester .22 caliber rifle, a Ruger M77, a Ruger 9mm handgun, magazines, ammunition and fireworks.”

Everitt Jameson now faces up to 20 years in prison for engaging in conversations online with FBI informants who intentionally targeted his weaknesses, as the mainstream media celebrates the fact that the FBI has foiled yet another FBI terror plot, and the agents who are responsible for ruining an innocent man’s life, look for their next victim.

If Jameson never had any intention of carrying out a terror attack and the entire idea was forced on him by the FBI, why on Earth would this be on the news and touted as some foiled plot?

Well, the answer to that is simple.

Former FBI assistant director Thomas Fuentes actually reveals the answer as he defends the tactics used by the FBI to set up poverty-stricken, mentally ill men by offering them large sums of money and weapons to commit crimes.

After he defended the FBI’s role in bribing poor, mentally diminished people to get them to commit crimes, he let out a bombshell statement, confirming what many of us already know.

There you have it. The FBI puts Americans in danger by grooming otherwise entirely innocent people into doing harm — so they can keep fear alive.

But what would’ve happened if Jameson would’ve actually carried out this attack that the FBI was trying to force on him? Would the FBI still claim they had informants attempting to groom him? Would they admit their role in his life at all?