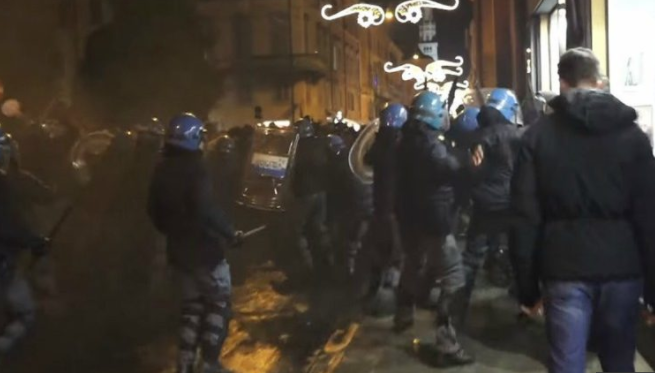 (Natural News) Antifa protestors are like schoolyard bullies – they have no problem stirring up chaos and inciting violence until someone bigger comes along and punches them square in the nose.

This is exactly what happened last Friday in the Italian town of Modena, when police clashed with violent Antifa protestors who were seeking to disrupt a rally organized by a far-right group called “Defend Modena,” which was protesting a law that allows people born in the country to obtain citizenship.

According to RT, as many as 300 “anti-fascists and anarchists” tried to march into the area where members of “Defend Modena” were protesting, but police cut them off. In response, the Antifa protestors began throwing explosives as law enforcement, as well as smoke pellets and other objects. With their own lives at risk, the police had no choice but to charge the “anti-fascist” group, using everything from batons to water cannons to disperse the lawless crowd.

At least two people were arrested, but there were no reports of any serious injuries.

This is exactly why millions of people around the world, including many in the United States, consider Antifa to be a terrorist organization rather than just another political movement that’s opposed to what they consider to be fascism. Time and time again, Antifa has proven that they are not peaceful, nor do they have any interest in operating within the confines of the law.

Just days ago, immediately following the derailment of the Amtrak train in Dupont, Washington that resulted in six dead and 78 others injured, Independent journalist Mike Cernovich tweeted an archived link from an Antifa group bragging about pouring concrete on train tracks in Olympia, Washington.

The deleted article, which was originally posted on ItsGoingDown.org, read, “Early in the morning of April 20th we poured concrete on the train tracks that lead out of the Port of Olympia to block any trains from using the tracks. We took precautions to notify BNSF (the train company) – we called them and we used wires to send a signal that the tracks were blocked. We did this not to avoid damaging a train, nothing would bring bigger grins to our faces, but to avoid the risk of injuring railway workers.” (Related: An undercover Antifa video has revealed that the group planned to trap conservatives in “kill zones.”)

The article went on to say that the action was meant to “disrupt the movement of trains carrying proppants used in natural gas fracturing,” and that the ultimate goal was to “blockade the entire web of domination that is slowly killing us.” Even though this article was published back in April of 2017, a post from another far-left website – which was posted just days ago – is still up. (Related: Is the left wing terror group Antifa responsible for the recent Amtrak derailment?)

Several schools across the country, such as the University of California, Berkeley, are now being forced to rethink the tactics they use to defend students from violent Antifa protests, which tend to occur whenever a conservative speaker is invited to deliver a speech or host an event on campus. With America’s transportation system under attack, America’s colleges and universities being threatened, and with violent Antifa protests starting to appear in cities across the country, it is safe to say that the anti-fascist group really is a terrorist organization, and therefore must be treated as such.

It’s ironic how Antifa is now so opposed to the so-called “fascism” being introduced into American society by the Trump administration, yet they were nowhere to be seen for eight years while Barack Obama was doing everything he could to consolidate power. They’re really not against fascism at all; they are against the idea of people being in control of Washington D.C. with whom they disagree politically.