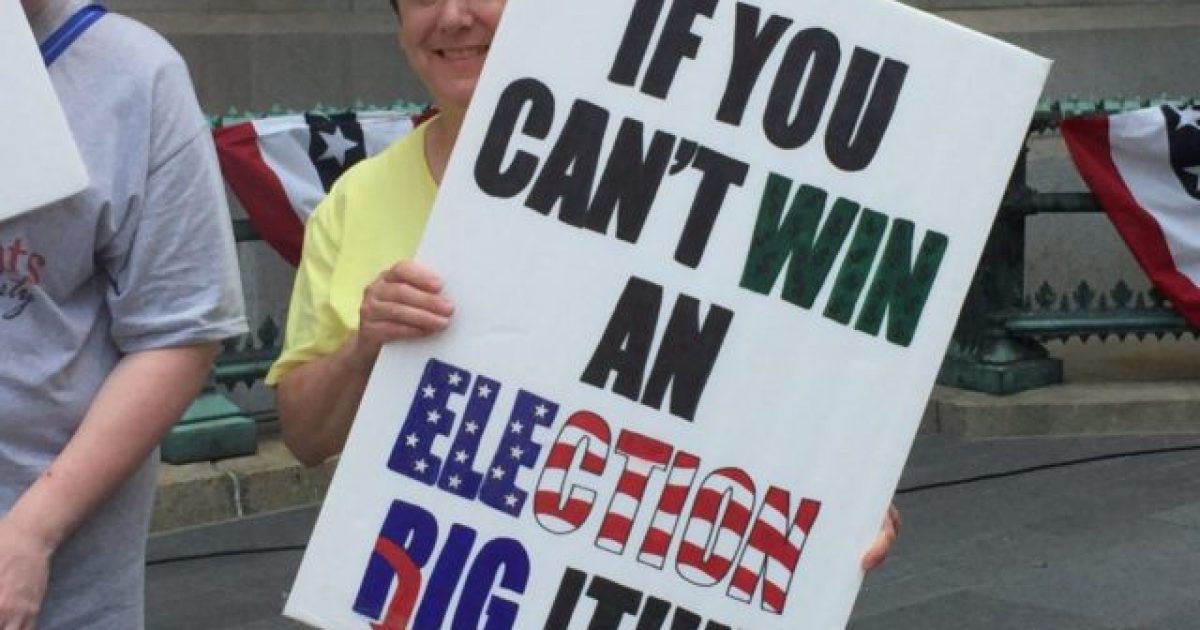 The recent Special Election between Republican Roy Moore and Democrat Doug Jones in Alabama shows us just how prevalent voter fraud and manipulation is in the United States today. Moore believed the election was rigged after Jones dramatically pulled out in front in the final vote tally to edge him out by some 20,000 votes. Moore refused to concede after the Jones win and at the time of this writing, has even filed a suit to delay the certification of the election results. Whether the suit will help his cause, remains to be seen.

The bottom line here is, the Alabama elections is a shining example of just how dirty US elections have become since the nation switched from paper ballots to electronic voter machines after the Hanging Chad circus following Al Gore’s defeat against George W Bush in 2000. Since then, we have hardly had a clean election. Going all the way back to the Presidential election in 2004 between John Kerrey and Bush. In that election, all indications from national polls to exit interviews were showing a Kerry win, yet in the end, Bush pulled out ahead to defeat Kerrey. In Arizona, John McCain wins again, despite all indications showing otherwise. Paul Ryan wins in Wisconsin against Paul Nehlen, even though most people in the state indicated they wanted new representation.

More recently, we have seen massive voter fraud and manipulation going on in both the presidential primaries and general election between Donald Trump and Hillary Clinton. The fraud and manipulation began from the start here with Clinton supposedly winning six coin tosses in the Iowa Caucus, which is mathematically impossible, and President Obama announcing he will use DHS to hack into state ballots to assure fair elections, which in translation really meant his help in manipulating the ballots for a Clinton win. Some states sued the DHS over them being caught hacking their ballots.

The DNC was involved in massive voter fraud to assure a Clinton win.

Hillary Clinton’s smug confidence throughout the whole election process from the primaries to the general election did not come from knowing she had massive overwhelming support from voters. It came from her knowing she, Obama, and the DNC had the election rigged for her. This same confidence is why to this day, she simply cannot believe she lost the election.

The ballots in virtually every larger city in the United States were fixed to show a Clinton win. This aside from states like California who allowed millions of illegals to vote and of course, the old tricks of fraudulent votes from dead people, individuals who cast multiple votes for the same person in the same election, and those bussed into precincts to cast ballots illegally.

What surprised everyone involved with fixing the election for Clinton was the huge turnout of Trump supporters in all rural areas of the country which was plenty to put him over the top for a win, despite the rigging of votes in metro areas.

Essentially, what the latest Alabama special election amounted to was a test run for future elections to see if the fraud and manipulation in rural areas will be enough to bring back the NWO Neo-Nazi Progressives to power again. It appears they have with the Jones win.

The main instrument used today with election fraud is the computer ballot. With such an electronic ballot, all votes can be literally changed at any given time to show a desired candidate as the winner. All electronic ballots are owned by corporations, who are owned by individuals, all of which have their political preference when it comes to who they want elected into office. Thus, to put our voting process in the hands of a few corporations, some based out of the country is asking for rigged elections.

The only possible way to have a clean election is to have a physical piece of paper showing who and what was voted for. In the case of computer ballots, if they are to be used as the only source of casting a ballot, the process has to be changed to one which makes fraud and manipulation nearly impossible. The only way this can be done is to have a paper, like a receipt of each individual vote showing exactly who and what each person voted for. This can be done with each electronic ballot immediately producing a card showing the results of each individual vote. There would have to be two cards produced, one would go to the voting box at one’s precinct to be individually counted while the other duplicate card would be retained by the person who voted.

The cards would then be individually hand counted physically at each precinct. There would also need to be unbiased monitors stationed at each polling place to assure accuracy and that all votes are counted.

In the case of the Electoral College process of electing Presidents in the United States, we must work hard to assure it stays in place as it is. After the 2016 Presidential election, there was a call to abolish the EC, by the Progressive Left. Their argument was that Hillary Clinton won the popular vote and should have become president. The big problem with having the popular vote decide who is to be president is we would always have two states, California and New York deciding for the rest of the 48 states who would be president. Under this scenario, the entire US would always have a Progressive Democrat in the White House.

The EC also guards us from voter fraud and manipulation since both California and New York are shining beacons of voter fraud by the simple fact that both states, especially California, have millions of fraudulent votes counted as legitimate in each election. This is primarily due to the votes cast from illegal immigrants and unsupervised voter registration. These two states automatically allow illegal immigrants to vote via registering them to vote when they are issued a driver’s license. As I have stated before, all votes from California, for example, should be automatically disqualified since federal law prohibits anyone who is not a citizen of the US from voting in any Federal election.

The bottom line here is we must have complete accountability in our election process to assure clean elections. As it is now, we have the dirtiest election system in the world thanks to electronic balloting in general and to the NWO Neo-Nazi Progressive dictatorship. This group thought they had the last presidential election in the bag through direct manipulation of the electronic ballots by Obama’s DHS, the DNC rigging of the election in Clinton’s favor, and other fraud on local levels.The elements of the Dictatorship, who could not believe they lost an election they had rigged for their chosen predecessor, fight hard today to oust President Trump who was elected by the majority of the people in the US. Their vision of the US being nothing more than a 3rd World Banana Republic governed by the UN is dead as long as the people control who gets into office.

Therefore, we must always be aware of the anti-American elements wishing to destroy the country as a sovereign nation in the guise of Progressives. The responsibility starts at the ballot box in keeping an eye out for fraud and demanding steps be taken to prevent any rigging of all elections.

We must also be aware of the anti-American individuals in office at the local levels who have the destruction of the US as a constitutional nation as their goal.

Tony Elliott is an established writer with articles in over 20 publications of differing topics. He was a Political Commentary Columnist for the Cimarron News Press in Cimarron, New Mexico from 2001 to 2003. He was also a regular writer for several small coastal newspapers in Southern Oregon during the early 1990’s. BOOKS: Aura Visions: The Origin Prophecy, Enviroclowns: The Climate Change Circus, Strange Sounds: A Research Report.