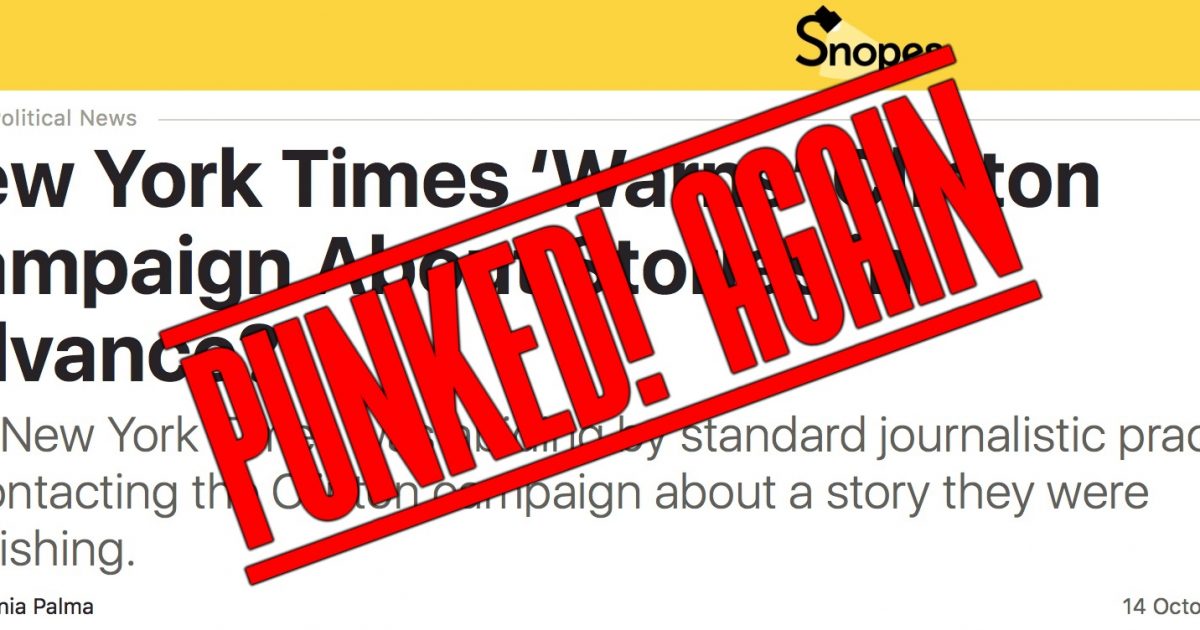 What’s so great about this latest “punking” of Snopes is that it comes by way of Infowars and assertions they made more than a year ago about Hillary Clinton colluding with the New York Times by getting information in advance about negative stories that would have an impact on her.

“It is standard journalistic practice for reporters to ask the subjects of their news stories for comment before publishing, and Times reporters Jonathan Martin and Maggie Haberman were doing their due diligence as professional journalists, said Frank Girardot, a former editor with the Los Angeles News Group and author of several true crime books,” responded Snopes to Paul Joseph Watson’s story on the collusion, and that assertion is correct, but contacting people for a response to a story and warning them of a potentially negative story coming out are two different things.  One is journalism and the other is collusion.

However, here’s what Paul Joseph Watson tweeted out.

New York Times warns Hillary campaign in advance of stories they are about to publish. https://t.co/Nz6EwzT7id #PodestaEmails7 pic.twitter.com/VDDCRDxlPe

Notice, there is no questioning for a story, but rather a notification that a story was about to break.

Now, of course, everyone knows that Clinton and NYT were colluding to deceive the American people due to emails released by Wikileaks.

Now Snopes has been embarrassed further by the revelation that a New York Times reporter used to email Hillary Clinton’s State Department days in advance to warn them of stories that were about to be published.

In one 2010 example, NYT national security reporter Scott Shane contacted Philip Crowley, who was at the time the United States Assistant Secretary of State for Public Affairs under Clinton’s State Department, listing the topics of all the different stories that the New York Times was set to run over the course of a week.

Email shows New York Times handed over Cablegate's publication schedule to the US government (without telling @WikiLeaks) giving the State Department, then headed by Hillary Clinton, up to 9 days in advance to spin the revelations or create diversions. https://t.co/IMrDOwoCd2 pic.twitter.com/CT4XkEs8Mc

This proves that the New York Times was indeed colluding with Clinton’s State Department by giving them a heads up on stories that were about to run, just as the newspaper colluded with the Clinton campaign during the election in the same manner.

Having initially fallen flat with its weak denial that the NYT colluded with the Clinton campaign, this email again underscores how the New York Times routinely colludes with government bodies and political campaigns it is friendly with, and that this is not just “standard journalistic practice”.

Snopes has long been known to be nothing more than a propaganda outlet for Socialists, Communists, Islamists, Marxists and other criminally minded politicians in our government in both major parties.

Why any organization (shoutout to Facebook) would consider them unbiased “fact checkers” is beyond me, but perhaps that gives us insight into the minds of those that Snopes colludes with in order to put out their propaganda to the people.