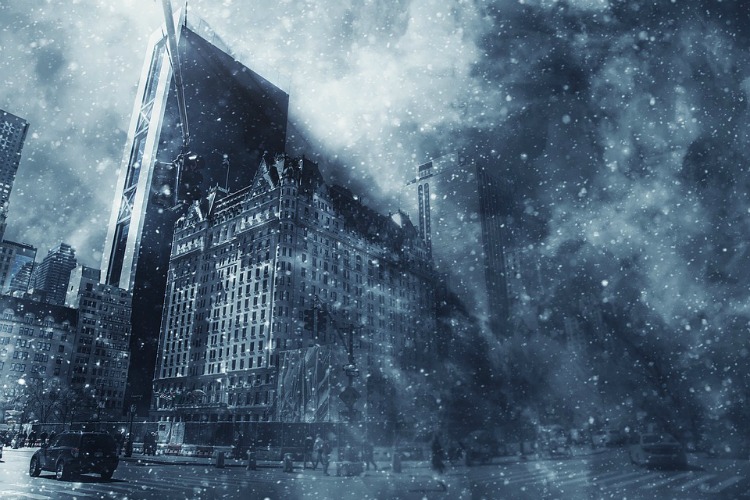 We’re starting the New Year off with a bang in the form of Winter Storm Grayson. The next weather threat heading our way is a phenomenon called a “bombogenesis.” This occurs when a system’s central pressure plummets dramatically — “24 millibars or more — in 24 hours” according to Bloomberg.

Basically, it’s a hurricane. A winter hurricane.  The same high winds (up to 80 mph) and the same precipitation, but with snow instead of rain.

Because what could be more exciting than a hurricane and a blizzard all rolled into one kick-bootie storm?

The entire East Coast is at risk, from the northern part of Florida all the way up into Canada. The Southern US will get some snow and wind on Wednesday, and New England will be hit hard on Thursday.

…ice has already formed on fountains in some southern cities, including Savannah, Georgia, and Charlotte, North Carolina.

In northern Florida and southern Georgia, a dangerous mix of snow and ice are in the forecast for Wednesday morning.

Residents of cities including Tallahassee, Florida, and Valdosta, Georgia, may see up to an inch of snow on the roadways during the Wednesday morning commute…

Through Wednesday the low pressure will ride up the East Coast, bringing a wintry mix of snow and ice through Georgia, South Carolina, and North Carolina.

The storm will strengthen as it moves north overnight Wednesday. By Thursday morning, there will be heavy snow across the Mid-Atlantic coast, including Philadelphia and the New Jersey shore.

The Mid-Atlantic is forecast to have about 3 to 6 inches of snow, with lower amounts inland and higher amounts near the coast.

The snow will continue north Thursday. Long Island and New England — especially Maine — may get over 6 inches of snow. (source)

Some schools in northern Florida, Georgia, and South Carolina have closed proactively today.

It’s expected that this snow-bomb will be followed by a return to the extreme cold that most of the US has been experiencing for the past few days.

And therein lies the issue – after the extremely high winds and dumping of snow, it’s likely that a lot of folks will lose power – in sub-zero temperatures.

Someone who is unprepared for this could be in for a difficult weekend. Perhaps even a deadly one.

Those in the South may have a bit of time this morning to stock up, but the storm will arrive about when the morning commute has begun. People further north will have time to hit grocery and hardware stores.

I’d strongly advise people to be prepared with the following:

If ever there was a great time to test your preps, like those of us doing the 2018 Stockpile Challenge, this is it.

Here’s a quick guide for the last-minute prepper.

If you’re on the East Coast, let us know what your experience is. (Assuming you can get online, of course.) Stay safe and warm, everyone!