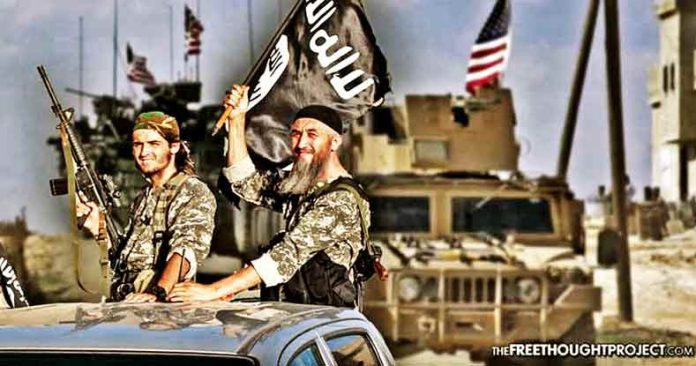 The report indicates that the terrorists were evacuated from the Deir ez-Zor region and flown to al-Hasakah province, which is under the control of U.S. and Kurdish forces.

U.S. helicopters reportedly conducted low-altitude flights into the al-Saad camp for displaced persons, and delivered the ISIS leaders, as part of an overall plan to create a new U.S.-backed military force in Syria – the North Syria Army, according to SANA.
Russian has directly accused the U.S. of attempting to reconstitute ISIS under a new name.

The U.S. has been repeatedly accused of utilizing terrorist groups in Syria, including ISIS and al-Nusra (al-Qaeda’s army in Syria), in an effort to destabilize and topple the Assad government. According to the Syrian government, the U.S. has supplied ISIS with intelligence in an effort to assist ISIS offensive operations and has repeatedly used American air power to rescue ISIS leaders from a rapidly approaching Syrian army.

Just last week, the Syrian government took the U.S. to task at the UN; accusing the U.S.-led coalition of coordinating actions with ISIS terrorists in Syria.

Last month, Russia leveled charges that the U.S. coalition was using the al-Hasakah-based camp to train jihadist militants who are being reorganized under a new banner.

According to refugee testimony, most of the estimated 750 militants at the camp are affiliated with ISIS and al-Nusra – with a core group of 400 ISIS militants who escaped Raqqa in October 2017 with help from the US military, according to Russian intelligence.

A spokesperson for the US-led coalition denied the Russian accusations, telling Sputnik that theirallegations were “absurd.”

The Free Thought Project reported similar accusations against the U.S. back in September from a diplomatic and military source within Syria, noting that the United States Air Force evacuated 20 ISIS commanders from Deir ez-Zor as Syrian forces liberated the city from terrorist control.

“Amid successful actions by Syrian government troops in the eastern part of Syria in late August, a number of field [Daesh] commanders backed by US special services, had been promptly evacuated from Deir ez-Zor to safer regions in order to use their experience in other directions,” the source reported.

At that time, the press office of the Combined Joint Task Force of Operation Inherent Resolve, which is the Joint Task Force established by the US-led international coalition against the Islamic State, called the allegations “false.”

The initial extraction of ISIS commanders reportedly took place on August 26, with a “United States Air Force helicopter” airlifting two ISIS field commanders of “European origin,” along with members of their families, from an area northwest of Deir ez-Zor during the night, according to information relayed by the source.

According to the data provided by the military and diplomatic source, the U.S. then airlifted another 20 ISIS commanders and top militant fighters from an area southwest of Deir ez-Zor.

“Militants who lost their commanders due to the Americans, usually tend to cease organized actions, leave their positions, join other [Daesh terrorist] units or one by one flee. This eventually contributes to the success of the offensive by the Syrian government troops in eastern Syria,” the source said.

The airlift of ISIS commanders allegedly happened as Syrian Arab Army forces, backed by Russian support, were in the process of breaking a three-year ISIS siege of Deir ez-Zor.

The United States has previously airlifted ISIS commanders from a city that was about to be liberated from the terrorist group, as similar activities were reported by an Iraqi commander when the central Iraqi city of Ramadi, which was under ISIS control, was being liberated in late 2015.

“The delay in operations to liberate Ramadi and Fallujah cities in al-Anbar province is the result of the US interference,” the commander of volunteer forces (Hashd al-Shaabi) reported at the time.

“It seems that the US intends to evacuate the ISIL terrorist group’s infamous ringleaders secretly (with helicopters) from Ramadi to unknown places,” he added, according to a report by the Iranian Fars News Agency.

Interestingly, the U.S. has a history of evacuating top terrorist leaders, warlords and fighters it deems as useful from battlefields.

Just after the invasion of Afghanistan, in November 2001, the U.S. allowed thousands of top Taliban commanders and members of Al-Qaeda—as well as their Pakistani advisers—to be airlifted out of Kunduz in an operation that was eventually deemed the “airlift of evil.”

Essentially, the U.S. needed to rescue the leaders of their proxy army, as having to train a new batch of would-be terrorists wouldn’t be economical. Everyone outside the domestically propagandized NATO nations knows Al-Qaeda, ISIS, and al-Nusra are the mainline, premium-brand, and local down-brand, respectively, of the USA’s proxy mercenary army.

Make no mistake that the Middle East and African nations are intentionally controlled and destabilized in this manner as a means of allowing the U.S. to continue to have access to the natural resources necessary to maintain its global hegemonic status.