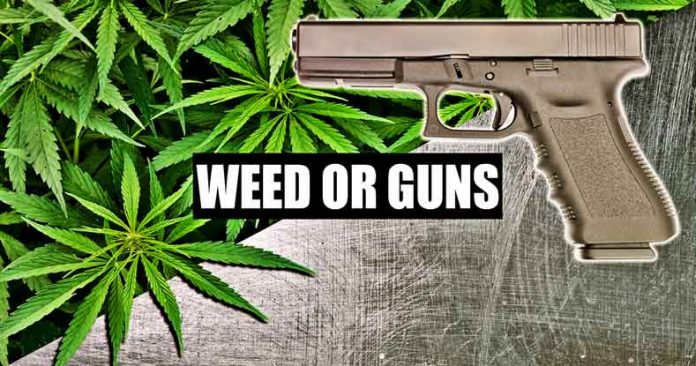 While the state of Pennsylvania has no law on the books that forces legal marijuana patients to turn in their guns, the state police are ignoring state’s rights and doubling down on the tyrannical federal law.

This week, the PSP issued a statement on their website informing all medical marijuana patients that refusing to turn in their guns makes them criminals. Because the tyrannical federal government still ignorantly considers cannabis to have no medical use whatsoever and to be a dangerous drug, the PSP is now promising to act as a hand of the feds to oppress the Second Amendment rights of entirely innocent marijuana patients.

It is legal under Pennsylvania law for the holder of a validly issued patient Medical Marijuana Card to possess approved forms of medical marijuana.  However,  as per the United States Department of Justice, Bureau of Alcohol, Tobacco, Firearms and Explosives (BATFE) state legalization of medical marijuana is not recognized by the federal government;, and possession of a valid Medical Marijuana Card and/or the use of medical marijuana  defines you an “unlawful user of or addicted to any controlled substance”; and, therefore, prohibited by Federal law from the purchase or acquisition, possession or control of a firearm pursuant to 18 U.S.C. § 922(g)(3), and 27 C.F.R. § 478.32(a)(3).

The PSP went on to clarify all aspects of anyone who would dare try to treat their glaucoma or epilepsy with legal weed and how it will land them in jail.

If you are holder of a Medical Marijuana Card, it is important that you know:

• It is unlawful for you to attempt to purchase a firearm under Federal law and you will be denied during your Pennsylvania State Police background check, due to prohibitions under 18 U.S.C. § 922(g)(3).
• It is unlawful under federal law for you to keep possession of any firearms which you owned or had in your possession prior to obtaining a medical marijuana card, and we recommend that you consult an attorney if you have any questions about your firearms.  Again, this is due to prohibitions under 18 U.S.C. § 922(g)(3).
• It is also unlawful for you to apply for, possess or renew a Pennsylvania License to Carry Firearm (LTC), because you are “[a]n individual who is prohibited from possessing or acquiring a firearm under the statutes of the United States.” (see above).  The sheriff should not process your application if you truthfully indicate to the sheriff that you are the holder of a Medical Marijuana Card.  Additionally, you will be denied during the Pennsylvania State Police background check, which occurs as part of the LTC application or renewal process.

Naturally, gun owners in the state—who haven’t bought into the ‘reefer madness’ rhetoric—are outraged. As KDKA reports, Patrick Nightingale who is a criminal defense attorney, a gun owner, and a recent applicant for a medical marijuana card says the PSP’s approach is disturbing.

According to KDKA, what disturbs him is a State Police statement on their website, citing federal law, telling medical marijuana cardholders, “It is unlawful for you to keep possession of any firearms which you owned or had in your possession prior to obtaining a medical marijuana card, and you should consult an attorney about the best way to dispose of your firearms.”

“Firearms are woven into the fabric of our country. It’s the second most important right in the Bill of Rights,” the attorney says.

Now the question is, will these PSP officers—who swore an oath to defend the constitution—begin confiscating guns or arresting people with medical marijuana cards?

Thanks to Jeff Sessions, who announced on Thursday that the federal government is rescinding a policy that allowed states to use their own discretion on marijuana laws, the PSP will likely receive federal funding to enforce this law.

According to Nightingale, if the PSP does enforce this federal law, they’ll be the criminals. But they likely won’t care.

“The Pennsylvania State Police, the Pennsylvania attorney general’s office, or any of the local law enforcement departments throughout the Commonwealth of Pennsylvania have absolutely no jurisdiction to enforce federal law,” says Nightingale.

However, if history is any indicator, those who unlawfully enforce unjust laws are more often celebrated as heroes than decried as criminals. So, Pennsylvania citizens who wish to protect themselves and self-medicate with a plant would do well to either raise awareness and attempt to force the executive to uphold the constitution—or move.

As TFTP reported in November, residents in Honolulu, Hawaii, were recently informed of a similar unconstitutional mandate that if they use cannabis for medicinal purposes, they will be given 30 days to “voluntarily surrender” their firearms and ammunition before the Honolulu Police Department begins confiscation.

Similar confiscations are happening in Ohio as well. Welcome to the land of the “free.”