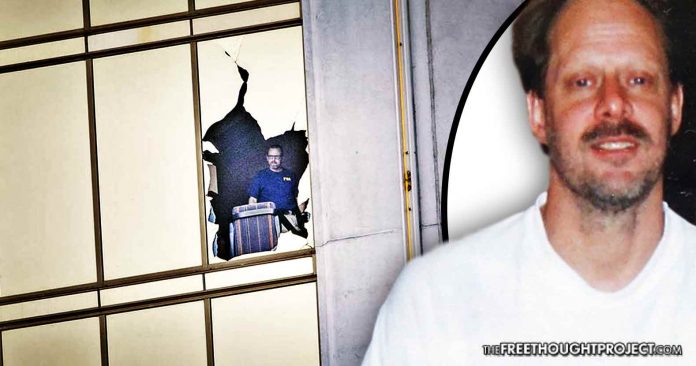 Three months after the deadliest mass shooting in modern U.S. history, yet another crucial change in the narrative has occurred as MGM Resorts International is now claiming that the hotel staff at Mandalay Bay had at least 10 interactions with suspect Stephen Paddock in the days before the shooting.

At least two of those interactions occurred on Oct. 1, the day that Paddock is alleged to have killed 58 people and injured more than 500 by launching a shooting spree out of his hotel room window on the 32nd floor. A spokesperson for MGM told The Las Vegas Review-Journal that the interactions on that fatal day consisted of a room service delivery and a visit from housekeeping:

“Mandalay Bay staff, room service and housekeeping had contact with Paddock or entered his suite more than 10 times over the course of his stay, including the three days leading up to October 1. There were numerous interactions with Stephen Paddock every day at the resort, including a room service delivery and a call with housekeeping on October 1, all of which were normal in nature.”

Following the shooting, reports claimed that Paddock’s arsenal consisted of 47 guns—23 of which were found in his hotel room—along with more than 50 pounds of exploding targets and 1,600 rounds of ammunition.

While the hotel’s surveillance footage from the days leading up to the shooting has yet to be released, one of the most pressing questions surrounding the massacre is how Paddock was able to transport all of the weapons and supplies to his hotel room without raising any red flags.

During an interview with Fox News Sunday one week after the shooting, chief executive of Wynn Resorts, Steve Wynn, suggested that Paddock may have escaped public attention by taking the service elevator, a perk typically given to “high rollers.”

“You’d never stop a man like this (Paddock) from coming in the building,” Wynn said. “However, nobody in this company’s history, no public person, has ever walked in the service elevator unless they were accompanied by security. Uh, that wouldn’t happen.”

At the time, Wynn was also critical of Mandalay Bay for failing to make contact with Paddock for two or three days, with the assumption being that he put a “Do Not Disturb” sign on the door of his room during his stay.

“The scenario that we are aware of would have indicated that he didn’t let anyone in the room for two or three days. That would have triggered a whole bunch of alarms here,” Wynn said.

The latest change in the timeline is significant because it implies that hotel staff were in Paddock’s room at least twice on the day of the shooting, and did not notice anything out of the ordinary about his luggage or his behavior.

While Wynn claimed that the scenario he was aware of involved Paddock using a “Do Not Disturb” sign for up to three days, the spokesperson for MGM claimed that if Paddock had done this, it would have required the hotel staff to conduct a welfare check.

“All MGM Resorts properties follow a health and welfare check operating procedure that stipulates a welfare check be performed after two consecutive days where a do-not-disturb sign has been displayed on the door and the guest has not interacted in-person or by phone with housekeeping or other hotel staff over the same period,” the spokesperson said.

Craig Eiland, an attorney for a number of victims from the shooting, noted that MGM Grand claims to have a “corporate watch center” that trains its employees to report any suspicious activity. So if a guest arrived at Mandalay Bay Hotel with two dozen rifles and thousands of rounds of ammunition stored in 10 bags, why didn’t the employees who helped him, or the cleaning service who visited his room regularly, report suspicious activity? And if they did, why wasn’t it addressed?

“I do think that after 30 days, we ought to be having more information than we have right now. For example, we know bits and pieces. We know that he arrived with 10 bags. We know that two bellmen helped him carry those bags up. Then we find out that those 10 bags had guns in them and 5,000 rounds of ammunition. We know that MGM claims to have an ‘If you see something, say something’ policy—and you’re telling us that nobody saw those guns over a 5-day period? No maid, no housekeeping, no food service ever saw any of the guns? Nobody saw him using power drills in the hallway? Nobody saw him setting up security cameras? These are all things that need to be answered.”

However, the statement from MGM Resorts International concluded that despite having at least 10 interactions with Paddock in the days leading up to the shooting, the hotel staff believed that “there was no need to conduct a welfare check.”

As The Free Thought Project has reported, the narrative of the shooting has changed multiple times. From the facts surrounding whether an officer discharged his weapon upon entering Paddock’s room, to the presence of police and security guards when the shooting began, the official story has been riddled with inconsistencies.