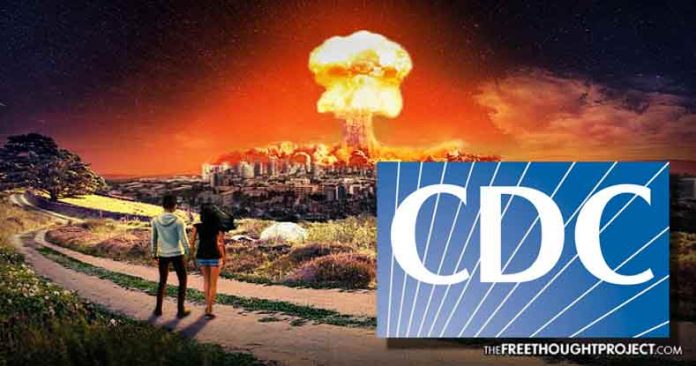 This week, the Centers for Disease Control and Prevention (CDC) announced that they will be holding a briefing which is designed to instruct the public on how to prepare for a nuclear war. A post on the agency’s website said that the briefing will be taking place on January 16th at the Alexander D. Langmuir Auditorium in Atlanta Georgia. The briefing will be hosted by a number of CDC representatives including Dan Sosin, Robert Whitcomb, and Betsy Kagey.

Some examples of the presentations that will be given are “Public Health: Preparing for the Unthinkable”, “Using Data and Decision Aids to Drive Response Efforts”, “Public Health Resources to Meet Critical Components of Preparedness” and “Roadmap to Radiation Preparedness.”

“While a nuclear detonation is unlikely, it would have devastating results and there would be limited time to take critical protection steps. Despite the fear surrounding such an event, planning and preparation can lessen deaths and illness. For instance, most people don’t realize that sheltering in place for at least 24 hours is crucial to saving lives and reducing exposure to radiation. While federal, state, and local agencies will lead the immediate response efforts, public health will play a key role in responding. Join us for this session of Grand Rounds to learn what public health programs have done on a federal, state, and local level to prepare for a nuclear detonation. Learn how planning and preparation efforts for a nuclear detonation are similar and different from other emergency response planning efforts.” a statement from the agency read. 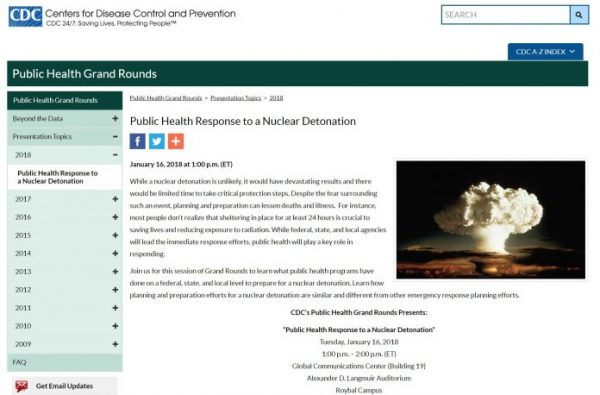 This statement is ominous not only because of mushroom cloud photo featured in the post but also because it comes it the midst of escalating hostility between the U.S and North Korea. For months now President Trump and North Korean leader Kim Jong Un have been exchanging threats, and this week Trump made a tweet suggesting nuclear force against the country.

“North Korean Leader Kim Jong Un just stated that the Nuclear Button is on his desk at all times.’ Will someone from his depleted and food starved regime please inform him that I too have a Nuclear Button, but it is a much bigger & more powerful one than his, and my Button works!” his tweet read.

However, despite all of these harsh words that are heavily reported in the mainstream media, there have been some positive developments recently on the Korean peninsula. This week it was reported that a line of communication was opened between north and south Korea and that peace talks have been scheduled between the two countries.

Kim Jon Un has expressed interest in making peace before the coming Winter Olympic games to be hosted in South Korea.

This year marks the 70th anniversary of the North Korean regime’s establishment, and the South will host the Winter Games. This year holds significance for the two Koreas.

“The Winter Games to be held in South Korea will be a good occasion for the country. We sincerely hope that the Winter Olympics will be a success. We have the readiness to take various steps, including the dispatch of the delegation,” Kim Jong Un said.

As TFTP recently reported, China has made similar moves to prepare their citizens for the prospect of a nuclear holocaust.

Revealing the extreme direness of the situation on the Korean Peninsula, a state-run Chinese media outlet based in a province bordering North Korea and Russia — the Jilin Daily — published a “common sense” guide for surviving a nuclear war, according to Reuters.

Although the full-page article of guidelines doesn’t specifically mention North Korea, the warning was clearly a result of the increasing tensions between a nuclear-armed DPRK, and the United States.

The influential Chinese state-run Global Times described the article as a public service announcement due to the situation on the Korean peninsula.

The Chinese government has previously said that they reject military intervention, but in the event that the U.S. launches a preemptive strike on North Korea – the Chinese military WILL intervene in defense of the North.

Make no mistake that the world is teetering on the brink of an extreme nuclear catastrophe.