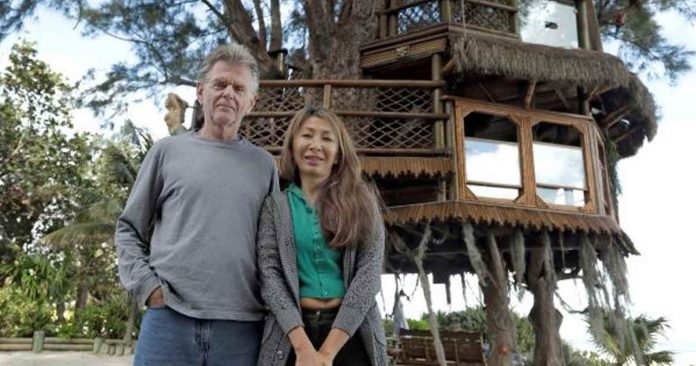 Holmes Beach, FL — Lynn Tran and Richard Hazen have spent over $150,000 building a beachfront treehouse Anna Maria Island on Florida’s west coast—in their own backyard. But it wasn’t the cost of the treehouse which was so expensive, it was the legal fees they spent trying to keep the city from tearing it down. After years of legal jousting, the couple has appealed their right to keep their treehouse all the way to the Supreme Court of the United States (SCOTUS). However, on Monday, the state won.

SCOTUS claimed a case of the state forcing a property owner to tear down an expensive building on their own property was simply not worth their time. Tran and Hazen built the two-level structure on their property as a getaway from their main home. The treehouse has windows which allow guests to enjoy a beautiful view of the Gulf of Mexico. But city officials say the couple did not get the proper permit needed to legally construct the structure. Tran and Hazen disagree and explained that they did everything by the book.

They say they asked the City of Holmes Beach if they needed a permit and were told “No.” Construction began in 2011. Shortly thereafter, a so-called “anonymous complaint” led city officials to investigate. That investigation resulted in the city telling the couple they had to take it down because the treehouse was outside of the city’s set-back line and they did not have a proper permit for its construction.

Tran and Hazen only spent $30,000 on the tree mounted structure. In an interview with CBS News, Tran said, “The Supreme Court is the last court of resort…if it doesn’t work out, we don’t even want to think about it yet…especially when we knew we didn’t do anything wrong.” And in a telephone interview with the Associated Press, she elaborated, “Part of me still believes there’s got to be justice out there and we didn’t do anything wrong.”

Sadly, her hope has run out. They are now going to be forced to continue to pay a $50 per day fine—which has been racking up for weeks—or tear it down. Make no mistake, if this couple refuses to pay the fine, armed agents of the state will come to their home and arrest them.

Tran and Hazen run Angelinos Sea Lodge, a rental property on the coast. They have no children and do not rent out the treehouse but say guests at their lodge enjoy spending time inside the structure, enjoying the views and the breeze. Holmes Beach Mayor Bob Johnson apparently couldn’t care less what happens to the couple’s investment. He said their fight to keep their treehouse is “quite honestly a waste of time,” and added, “for some reason these people have this fixation on it.”

After all, as TFTP has reported on numerous occasions, conforming to city codes and permitting is required by law. Even the act of gardening has been ruled illegal in some parts of the country.

Currently, in almost every state in the union, people have to have a permit to go fishing, build a shed, get married, travel, have a business, work, drive a car, and the list goes on and on. So, who’s really free if every major life decision is left up to someone else?