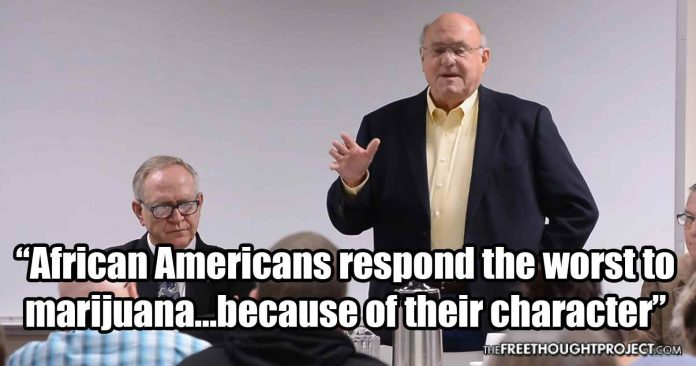 Proving that ignorance and close-mindedness still reign in politics, during a Saturday Legislative session debating whether or not marijuana should be legalized in Kansas, a state representative made the most asinine, unfounded, and outright racist comment about marijuana to be uttered from a politician’s mouth in over a half-century.

As State Rep. Steve Alford, R-Ulysses, was failing miserably attempting to make his point on why marijuana should remain illegal in the state of Kansas, he began with unfounded and debunked myths before jumping off the racist deep end.

Remaining entirely ignorant to the massive amount of evidence to the contrary, Alford attempted to paint marijuana as a gateway drug.

“Basically any way you say it, marijuana is an entry drug into the higher drugs,” Alford said.

But when one looks past the surface of this claim, it becomes downright silly. It just so happens that 99% of these so-called illicit drug users could have also tried coffee, soft drinks, candy, or milk before moving on to harsher substances.

Marijuana is actually an exit drug as the promise it shows in curbing opioid addiction as well as relieving symptoms of PTSD and depression far better than the dangerous pharmaceuticals is evidence of this.

As TFTP reported, a JAMA Internal Medicine study looked at ten years of data in all 50 states, concluding that states with medical cannabis laws had significantly lower rates of opioid overdose mortality.

But this representative of the people couldn’t care less about the dramatic effect cannabis is having on saving lives—because black people.

“What you really need to do is go back in the ’30s, when they outlawed all types of drugs in Kansas (and) across the United States.

“What was the reason why they did that?” he asked to a crowded room 100 percent filled by white people. “One of the reasons why, I hate to say it, was that the African Americans, they were basically users and they basically responded the worst off to those drugs just because of their character makeup, their genetics and that. And so basically what we’re trying to do is we’re trying to do a complete reverse with people not remembering what has happened in the past.”

It was as if Alford channeled Harry Anslinger—the founding commissioner of the Federal Bureau of Narcotics, now the DEA—and began spouting off the lies and propaganda of the 1930’s which were used to outlaw marijuana.

When Anslinger rammed his reefer madness down the throats of all Americans in the 1930’s, he became famous for such quotes noting that “the primary reason to outlaw marijuana is its effect on degenerate races.” Anslinger also said that “reefer makes darkies think they’re as good as white men.”

During the time Alford is speaking of, Congressmen rallied around statements like these, and others such as, “All Mexicans are crazy, and this stuff [marijuana] is what makes them crazy”, and “Give one of these Mexican beet field workers a couple of puffs on a marijuana cigarette and he thinks he is in the bullring at Barcelona.”

Another popular quote attributed to Anslinger: “There are 100,000 total marijuana smokers in the U.S., and most are Negroes, Hispanics, Filipinos and entertainers. Their Satanic music, jazz and swing result from marijuana use. This marijuana causes white women to seek sexual relations with Negroes, entertainers and any others.”

Lies and idiocy like the ones spouted by Alford were what led to marijuana becoming illegal in the first place which led to the suffering and death of countless Americans—and the subsequent rise of the police state and drug war.

It is also important to point out that there is absolutely zero evidence showing marijuana affects African Americans any different than any other race.

Sadly, as the GC Telegram reported, even after being proven wrong, Alford stood by his insane remarks, clarifying them.

“There are certain groups of people, their genetics, the way their makeup is, the chemicals will affect them differently,” Alford said. “That’s what I should have said was drugs affect people differently instead of being more specific.”

He added, “It’s just the history of how come we are with the drug laws that we do have today, and how come the United States was so prevalent in outlawing drugs. I think we’ve got to look back to see what has happened in the past to look forward.”

Here’s to “looking forward” Rep. Alford—as obstinate dinosaurs like you who want to kidnap and cage people for ingesting a plant that heals them and makes them happy—continue to be exposed and lose your grip over the lives of peaceful Americans.