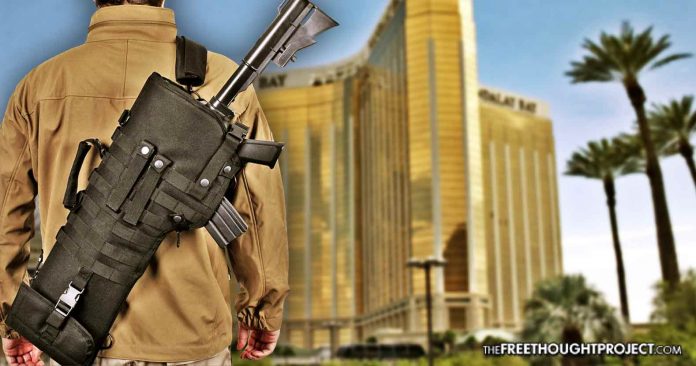 Las Vegas, NV – Any chance of a successful cover-up in the case of the Las Vegas Mandalay Bay massacre just got exponentially more difficult to successfully pull off, as new information provided by an FBI source with direct knowledge of the investigation has revealed that the FBI has yet to see ANY surveillance video of alleged gunman Stephen Paddock bringing weapons and thousands of rounds of ammunition to his 32nd-floor hotel suite in Mandalay Bay into the hotel.

“No one has seen that on the video we were provided by MGM,” an FBI official told True Pundit. “Vegas (PD) has looked at the same video. Paddock is on surveillance video but the guns are not. He’s not carrying bags or cases with rifles.”

These latest revelations in the investigation into the massacre of 58 people in Las Vegas raise serious and startling questions as to the veracity of the official story of what took place on Oct. 1.

So, if Paddock isn’t shown bringing cases, bags, weapons or ammo into the hotel, then just what is going on? How did the numerous rifles get into Paddock’s hotel suite?

Interestingly, the FBI source confirmed that he believes there could, in fact, be surveillance footage that proves Paddock transported the weapons into the Mandalay Bay hotel – but that MGM Resorts International, the parent company of the hotel, could be obstructing the investigation by hiding the video.

“They (MGM) control the surveillance video,” an FBI source told True Pundit. “I have never seen that in any other case. We (the FBI) control the physical evidence.”

This would seem to comport with what The Free Thought Project previously reported regarding MGM International allegedly hiring elite crisis management firm Joele Frank to spread disinformation about the massacre online.

According to a bombshell report, published by Thomas Michael on Medium, the crisis management firm deliberately spread outlandish conspiracy theories on social media in an attempt to discredit legitimate inquiry into the bizarre official narrative—actively working to try and muddy the water about events surrounding the mass-shooting.

The report details how MGM International hired Joele Frank to run damage control in the wake of the deadly attack. Michael’s report subsequently exposes ties between the crisis management firm and numerous Twitter accounts posting clearly bogus conspiracy theories about the mass-shooting, claiming “the shooting was fake, there was no blood, no victims, crisis actors, the whole nine-yards.”

The report goes on to explain how Michael discovered that a significant portion of the disinformation on Twitter concerning the Las Vegas massacre was originating from an account with the handle @DeepStvte.

Curiously, the @DeepStvte account is heavily connected with bots, which helped it spread nonsensical conspiracy theories about the shooting, according to GotNews.

Michael then made a number of disturbing discoveries upon further investigation:

“Now, here is where it gets really weird. Sifting through every reply on the DeepStvte account, I discovered someone who made a few replies in the comment sections — an individual by the name of Mr. Scott Bisang, handle @sbis85. Upon further research, Mr. Bisang is the Head Manager of Joele Frank, the crisis management firm that Mandalay Bay hired after the 1 October Shooting. So, when I searched his Twitter to find his comments on the Las Vegas Massacre again for this piece, all of the posts/replies had been deleted.”

The Medium report goes on to expose an intentional disinformation campaign by the crisis management firm to confuse people who are seeking answers to the tragic Las Vegas massacre:

“Furthermore, the REAL conspiracy theories that were being propagated by the above mentioned Twitter handles were pushing stories such as the shooting was fake, there was no blood, no victims, crisis actors, the whole nine-yards; while simultaneously discrediting any viable theories made by the public. These are, without question, professionals. And, when I mean pushing their real conspiracy theories: they were getting 7.5M impressions at one point in October on Twitter. This was a direct disinformation campaign designed to lure folks who were questioning the official narrative into being told fairy-tales about what actually happened that night, and thus become discredited as ‘conspiracy theorists’ after they rattle off some absurd story that they were told by one of those Twitter handles.”

So why would MGM International be trying to run a cover-up?

A new documentary provides a startling answer—the casino is playing a massive game of CYA (cover your ass)!

The film, titled, “What Happened in Vegas,” explores the role of the Las Vegas Police Department covering up the details of the shooting—for the sole benefit of their bosses in the casino.

The reason the police would go along with this is simple, as the documentary explains that they are simply in the pocket of the Las Vegas mega-casinos, which would be liable for tens to hundreds of millions in lawsuits due to extreme negligence in failing to stop Stephen Paddock from killing 58 people that fateful night because of the special treatment given to casino high-rollers.

As Raw Story notes, at the root of the problem, the film explains, is that the LVPD is run by a sheriff elected in large part by donations from MGM. Las Vegas police changed their story multiple times on the timeline of the shooting.

One important detail the police lied about in several instances is the timing of Paddock’s shooting of security guard Jesus Campos. Why? It’s likely that the LVPD wanted to help the casino’s legal case, and if they claimed Campos was shot while trying to prevent Paddock’s rampage, as opposed to during or after, it could help the casino’s lawyers later claim that the Mandalay Bay had taken sufficient action to stop him.

According to Stephen Stubbs, an attorney representing some of the victims in the shooting, Paddock was able to kill so many people that night because the casino treated him differently because he was a high roller. Instead of calling 911 when the shooting began, the casino called their “special back number” to a private wing of the police department in an attempt to keep the incident under wraps.

Because Paddock was a regular high roller at the casino, Mandalay Bay didn’t call 911 and so dispatch was not able to link the shooting inside the hotel with the shooting at the Route 91 music festival.

Given this information, the pieces of the puzzle now fall into place. As TFTP has previously reported, because of his high roller status, Paddock was also granted special privileges at the casino—like access to the service elevator.

One of the most asked questions about the massacre in Las Vegas was, “How did Stephen Paddock get hundreds of pounds of ammo and nearly two dozen assault rifles into his suite on the 32 floor of Mandalay Bay without anyone noticing?” Well, now we know—he was allowed to use the service elevator.

The fact that Paddock had access to the elevator, coupled with the fact that a special back line to police was called instead of 911—the casino now becomes complicit in allowing so many people to die that night.

Additionally, Clark County Sheriff Joe Lombardo has was called a “liar” by a high-ranking insider from the Clark County District Attorney’s Office, according to True Pundit. The DA source claims that Lombardo has not told the truth about his SWAT unit firing its weapons after breaching Paddock’s hotel door.

“He’s a liar,” the DA source told True Pundit of Lombardo. “This is one of the premier SWAT units in the United States. Other police departments pay to train with them here (in Las Vegas). They do not accidentally fire weapons. That is pure fiction.”

After claiming for weeks there were no shots fired by police and Paddock killed himself, Lombardo revised his statements to claim that an “accidental” gunshot fired by LVMPD – but only a week after True Pundit, On Oct. 24th, published audio from Las Vegas Metro SWAT that exposed the sheriff’s lies.

According to a report from True Pundit:

According to the audio, Paddock was likely gunned down by LVMPD’s elite “Zebra Unit” SWAT force. A SWAT officer code named “Zebra20” and apparent leader of the team’s strike force who led the raid on Paddock’s Mandalay Bay suite reported on police radio that one member of his team did open fire inside Paddock’s room.

Lombardo for weeks, along with FBI officials, claimed no shots were fired and Paddock killed himself. Then Lombardo admitted a gun was fired by Las Vegas Metro after entering Paddock’s room, essentially backing True Pundit’s original story that detailed shot(s) were indeed fired by SWAT.

If a SWAT officer fired his weapon in Paddock’s hotel room it was to subdue or kill Paddock, the DA insider said.

“We have one SWAT officer that did fire,” the SWAT strike force team leader said, according to the audio transcript.

Zebra20 then reported no other people were injured during the breach, alluding Paddock was the sole casualty.

“We just have one suspect down at this point in time,” he said.

So what is really going on?

Clearly, the events heard on the audio reveal at least part of the official narrative to be fallacious and directly contradict both Sheriff Lombardo and the FBI’s Aaron Rouse, head of the FBI’s Las Vegas field office.

Only days after the massacre the DA insider told True Pundit that Lombardo was simply a puppet of the FBI.

Apparently, both Lombardo and the FBI brass are covering for MGM International and its billion-dollar interests – which leaves one glaring question; who is looking out for the victims of this heinous crime and their families?

Please share this important information to help people more clearly understand the ongoing cover-up by MGM International and the continuing victimization of the families affected by the Las Vegas massacre!