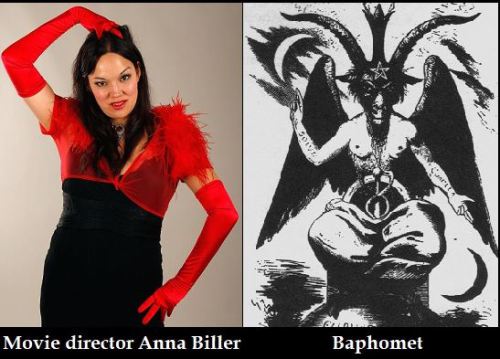 “The greatest trick the devil ever pulled was convincing the world that he doesn’t exist.” -Charles Baudelaire

Back in April 2016, I did a post on Satanism having become a new political movement in America, as the light of Christ dims in America, exacerbated by 8 years of Obama in the White House. Indeed, a 2015 study by the Pew Research Center found that, although the U.S. population continues to grow, mainline Christianity and Catholicism have fallen 3.4% and 3.1%, respectively.

As if Californians can get even more lost, August Brown reports for the Los Angeles Times, Jan. 5, 2018, that a new generation of Californians are turning to Satanism “in service of radical politics, feminist aesthetics and community unity in the divisive time of Trump.”

Last November, a group of Satanists gathered for a candlelit ceremony in the basement of Alexandra and Zachary James‘ Los Angeles home.

For his part, echoing community organizer Saul Alinsky’s book dedication, Zachary James explains that “In these times, a lot of people want to not feel helpless. And Lucifer was the original rebel angel.”

Anna Biller, director of the 2017 film The Love Witch, said that “the aesthetics of the occult” is everywhere you look and that satanism is appealing to feminists:

“There are so many young women especially who use occult imagery to define their identity. What I’m trying to do is to transform the witch from a figure of male fear and fantasy into a figure of female power and sexuality. For some women it represents healing, for others, raw power, for others, the freedom to be unorthodox or to find their own spirituality outside of the family system. It’s important for women to try to reclaim our images for ourselves.”

On Halloween, Zachary and Alexandra James’ group of satanists gathered in the basement of the Hollywood bar Black Rabbit Rose. At the witching hour, the young film director Kansas Bowling was anti-baptized as their new cover-mate. As described by L. A. Times:

“Blood-smeared and stripped down to nearly ‘sky-clad’ . . . Bowling was offered up in service to the goddess Lilith as an avenging angel for crimes against women.

‘Some of these men, like Harvey Weinstein, are finally being held accountable for their crimes,’ Alexandra yelled at the crowd. ‘What do you think, shall we burn him at the stake? Or shall we drown him and see if he floats?’ The crowd erupted in cheers for both.”

Though not a Californian, Stuart Jeffries — a subeditor and correspondent of the UK newspaper The Guardian — is clearly a satanist enthusiast. Referring to Chelsea Clinton’s “Happy New Year” tweet to the Church of Satan, Jeffries writes:

“Disappointingly, Chelsea Clinton has denied she and her husband practise satanism…. One hopes that, like her father’s denial of having had ‘sexual relations with that woman’, Chelsea’s disclaimer isn’t for real. Doesn’t she realise that the radical power of Satan is having a moment unparalleled since Milton unwittingly made him the badass rebel hero of Paradise Lost? . . . .

Satanism’s latest mutation is . . . a contrarian uprising against a patriarchal world order that deserves its comeuppance.

How inspiring to find that in 2018 satanists are more progressive than the Great Beast even now tweeting diabolically from the Oval Office.”