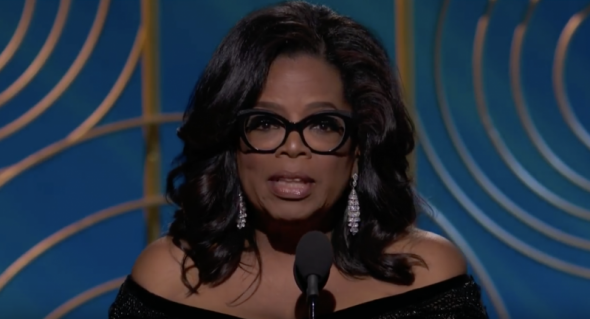 Clearly, Oprah Winfrey has always been known as an anti-Christian, new age sort of person.  However, following her thoughts about a possible 2020 presidential bid and Golden Globe comments that were met with ridicule, an old video has resurfaced in which Oprah is clearly at odds with the Bible and the Lord Jesus Christ, whom America was first found upon.

Now, before you go all revisionist on me, let me simply quote the Mayflower Compact as to my assertion that it was Christians, promoting Jesus Christ and His Gospel, who founded America.

In the name of God, Amen. We whose names are underwritten, the loyal subjects of our dread Sovereign Lord King James, by the Grace of God of Great Britain, France, and Ireland King, Defender of the Faith, etc.  Having undertaken for the Glory of God and advancement of the Christian Faith and Honour of our King and Country, a Voyage to plant the First Colony in the Northern Parts of Virginia, do by these presents solemnly and mutually in the presence of God and one of another, Covenant and Combine ourselves together in a Civil Body Politic, for our better ordering and preservation and furtherance of the ends aforesaid; and by virtue hereof to enact, constitute and frame such just and equal Laws, Ordinances, Acts, Constitutions and Offices from time to time, as shall be thought most meet and convenient for the general good of the Colony, unto which we promise all due submission and obedience. In witness whereof we have hereunder subscribed our names at Cape Cod, the 11th of November, in the year of the reign of our Sovereign Lord King James, of England, France and Ireland the eighteenth, and of Scotland the fifty-fourth. Anno Domini 1620.

By the way, that little bit at the end, “Anno Domini” is the “Year of Our Lord” and has always made reference to the Lord Jesus Christ.

Take a listen to Oprah, the antichrist.

Sure, all roads do lead to God, but where is the ultimate end?  In judgment in Hell or in the experience of the fullness of the grace of God in Heaven?

Clearly, Oprah has been messing around with too much “spiritualism” and not enough truth.  She is much in the same boat as Barack Hussein Obama Soetoro Sobarkah, who has one foot in the antichristian Islam and one foot in Christianity.  That too, is an antichrist, according to the apostle John (1 John 2:18; 2:22; 4:3; 2 John 1:7).

Jesus *said to him, “I am the way, and the truth, and the life; no one comes to the Father but through Me.

It looks like Oprah is the one that needs correcting, not Jesus and certainly not those in her audience who were simply pointing that she could not hold both positions considering Jesus’ words.

No one who attacks Jesus Christ and His Gospel and the truth that He is the only way to Heaven should be allowed to occupy any office in the US.  If you don’t believe me, just look at the rich history of America as a Christian nation from William Federer.

In response to Barry Soetoro’s ignorant statement in 2006, “Whatever we once were, we are no longer a Christian nation” Federer wrote the following to correct him.

Wouldn’t it be interesting to find out “whatever we once were”?

Originally, laws that governed personal behavior were under states’ jurisdiction, not federal.

At the time the Constitution was written, religion was under each individual state’s jurisdiction, and each state expanded religious tolerance at its own speed.

The U.S. Constitution went into effect June 21, 1788, when two-thirds of the states ratified it.

What was in those original 13 state Constitutions concerning religion at the time those states ratified the U.S. Constitution? [Caps added throughout for emphasis.]

DELAWARE – first to ratify the U.S. Constitution, stated in its 1776 state constitution:

“Every person … appointed to any office … shall … subscribe … ‘I … profess faith in GOD THE FATHER, and in JESUS CHRIST His only Son, and in the HOLY GHOST, one God, blessed for evermore; and I do acknowledge the Holy Scriptures of the Old and New Testament to be given by Divine inspiration.’”

PENNSYLVANIA – second to ratify the U.S. Constitution, stated in its 1776 state constitution, signed by Ben Franklin:

“Each member, before he takes his seat, shall … subscribe … ‘I do believe in one GOD, the Creator and Governor of the Universe, the Rewarder of the good and the Punisher of the wicked. And I do acknowledge the Scriptures of the Old and New Testament to be given by Divine Inspiration.’”

NEW JERSEY – third to ratify the U.S. Constitution, stated in its 1776 state constitution:

“All persons, professing a belief in the faith of any PROTESTANT sect, who shall demean themselves peaceably under the government … shall be capable of being elected.”

GEORGIA – fourth to ratify the U.S. Constitution, stated in its 1777 state constitution:

“Representatives shall be chosen out of the residents in each county … and they shall be of the PROTESTANT religion.”

CONNECTICUT – fifth to ratify the U.S. Constitution, retained its 1662 Colonial Constitution, which was established PROTESTANT CONGREGATIONAL, till 1818:

“By the Providence of GOD … having from their ancestors derived a free and excellent Constitution … whereby the legislature depends on the free and annual election. … The free fruition of such liberties and privileges as humanity, civility and CHRISTIANITY call for.”

MASSACHUSETTS – sixth to ratify the U.S. Constitution, stated in its 1780 state constitution, written by John Adams:

“Any person … before he … execute the duties of his … office … [shall] subscribe … ‘I … declare, that I believe the CHRISTIAN religion, and have a firm persuasion of its truth.’ … The legislature shall … authorize the support and maintenance of public PROTESTANT teachers of piety, religion and morality.”

MARYLAND – seventh to ratify the U.S. Constitution, stated in its 1776 state constitution:

“No other test … ought to be required, on admission to any office … than such oath of support and fidelity to this State … and a declaration of a belief in the CHRISTIAN religion.”

SOUTH CAROLINA – eighth to ratify the U.S. Constitution, stated in its 1778 state constitution:

NEW HAMPSHIRE – ninth to ratify the U.S. Constitution, stated in its 1784 state constitution:

“No person shall be capable of being elected … who is not of the PROTESTANT religion.”

VIRGINIA – 10th to ratify the U.S. Constitution, stated in its 1776 state constitution, bill of rights, written by James Madison and George Mason:

“It is the mutual duty of all to practice CHRISTIAN forbearance, love, and charity towards each other.”

NEW YORK – 11th to ratify the U.S. Constitution, stated in its 1777 state constitution:

“The United American States … declare … ‘Laws of nature and of NATURE’S GOD … All men are created equal; that they are endowed by their CREATOR with certain unalienable rights … Appealing to the SUPREME JUDGE of the world … A firm reliance on the protection of DIVINE PROVIDENCE’ …”

NORTH CAROLINA – 12th to ratify the U.S. Constitution, stated in its 1776 state constitution:

“No person, who shall deny the being of GOD or the truth of the PROTESTANT religion, or the Divine authority either of the Old or New Testaments, or who shall hold religious principles incompatible with the freedom and safety of the State, shall be capable of holding … office.”

RHODE ISLAND – 13th to ratify the U.S. Constitution, retained its 1663 Colonial Constitution till 1843, which stated:

“By the blessing of God … a full liberty in religious concernements … rightly grounded upon GOSPEL principles, will give the best and greatest security … in the true CHRISTIAN faith and worship of God. … They may … defend themselves, in their just rights and liberties against all the enemies of the CHRISTIAN faith.”

“An establishment of religion, in terms of direct tax aid to Churches, was the situation in nine of the 13 colonies on the eve of the American revolution.”

The Journal of the U.S. House recorded that on March 27, 1854, the 33rd Congress voted unanimously to print Rep. James Meacham’s report, which stated:

“Down to the Revolution, every colony did sustain religion in some form. It was deemed peculiarly proper that the religion of liberty should be upheld by a free people. …

“Had the people, during the Revolution, had a suspicion of any attempt to war against Christianity, that Revolution would have been strangled in its cradle.”

Over the years, the Christians in these states extended tolerance to other denominations, to Jews, to monotheistic religions, to any religion and eventually to atheists.

Activists judges creatively used the 14th Amendment to remove authority over many issues from state jurisdiction.

Though our government has seemingly abandoned ties to the past, for the student of history, it is still fascinating to find out “whatever we once were.”

Oprah attempts to play God as she erects her own standard of a “good heart” and “kindness” that is not based upon God’s Law and His Gospel.  The truth is that Oprah should listen to a man who claimed to have kept God’s Law and been found without blame, but confessed that he never measured up and was in need of the redemption purchased by Christ to be applied to him and to be clothed in a righteousness that was not his own (Romans 1:16).  Listen to the apostle Paul.

If anyone else has a mind to put confidence in the flesh, I far more: circumcised the eighth day, of the nation of Israel, of the tribe of Benjamin, a Hebrew of Hebrews; as to the Law, a Pharisee; as to zeal, a persecutor of the church; as to the righteousness which is in the Law, found blameless. But whatever things were gain to me, those things I have counted as loss for the sake of Christ.  More than that, I count all things to be loss in view of the surpassing value of knowing Christ Jesus my Lord, for whom I have suffered the loss of all things, and count them but rubbish so that I may gain Christ, and may be found in Him, not having a righteousness of my own derived from the Law, but that which is through faith in Christ, the righteousness which comes from God on the basis of faith, that I may know Him and the power of His resurrection and the fellowship of His sufferings, being conformed to His death; in order that I may attain to the resurrection from the dead. -Philippians 3:4-11

Oprah, unless your righteousness exceeds that, you are headed for a very rude awakening.  I pray you repent before that occurs.