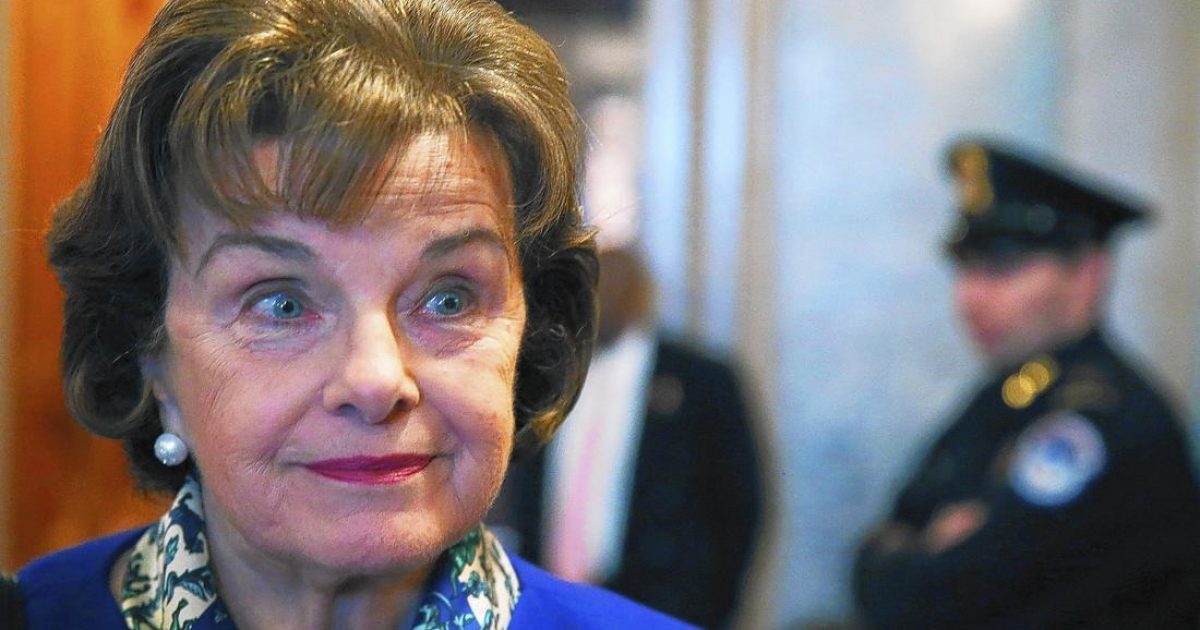 The Democrat Party is filled with those who are mentally unstable.  That’s why they are so anti-American in many cases, and while they are attempting to go after President Donald Trump over being “mentally unstable,” something that Iran’s Ayatollah basically just said, they would do well to deal with their own mentally unstable people, starting with Senator Dianne Feinstein (D-CA).

Senator Feinstein took it upon herself to release the 312-page transcript of the interview of Glenn Simpson, a former journalist and co-founder of Fusion GPS, which commissioned the infamous and debunked Trump dossier that has led to untold millions being spent on a witchhunt in DC that has basically turned up nothing.

Of course, Feinstein offered a previous excuse, one that is a bit more sinister and walked it back.  She then offered another excuse for her behavior on Wednesday.

“The one regret I have is that I should have spoke with Senator Grassley before,” she told NBC News.  “And I don’t make an excuse but I’ve had a bad cold and maybe that slowed down my mental facilities [sic] a little bit.”

Of course, she is making an excuse.

When Feinstein was first called out on her actions, she said, “I just got pressured.”

Of course, it makes one wonder who was doing the pressuring, or was it just that Feinstein saw the opportunity and took it?

However, Senator Feinstein began to immediately back peddle her statements, claiming that she was not pressured.

As you can see, she never did clear up the discrepancy in her statements, and that concerns me!

On Wednesday, President Trump called out “Sneaky Dianne Feinstein” for what she did.

“The fact that Sneaky Dianne Feinstein, who has on numerous occasions stated that collusion between Trump/Russia has not been found, would release testimony in such an underhanded and possibly illegal way, totally without authorization, is a disgrace. Must have tough Primary!” he tweeted.

The fact that Sneaky Dianne Feinstein, who has on numerous occasions stated that collusion between Trump/Russia has not been found, would release testimony in such an underhanded and possibly illegal way, totally without authorization, is a disgrace. Must have tough Primary!

Of course, Feinstein didn’t take that comment lightly and claimed that she didn’t do anything that was illegal.

“I didn’t do anything illegal,” she said. “That transcript has become so abused that time has come for people to take a look at it.”

“The American people deserve the opportunity to see what he said and judge for themselves,” she then said in a statement.  “The innuendo and misinformation circulating about the transcript are part of a deeply troubling effort to undermine the investigation into potential collusion and obstruction of justice.”

Who was Feinstein colluding with when she released the document?

For Grassley’s part, he called Feinstein’s actions “confounding” and said that the two of them had been discussing the release, but had not come to a mutual time to do so.  He also added, “It may make a lot of people a little more reserved whether or not they want to cooperate, including in regard to Jared Kushner […] very high profile person as an example. But we’ll continue to move forward”

Will Grassley openly censure Feinstein for what she did?  Will he demand a mental evaluation to see if she can hold office?

I doubt it, especially in light of the fact that he seems to dismiss what Senator Feinstein did in saying, “These transcripts would have been released eventually anyway.  Obviously, I was a little disappointed because I had an understanding ahead of time that it’d be released when we both agreed to release it.”

However, I agree with President Trump on this one, Senator Feinstein must face a tough primary, although the same people that elected her to the US Senate for the past quarter of a century and for years as mayor of San Francisco before that.  ThSenatete will more than likely just get a younger version of this anti-American woman.