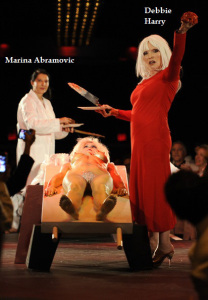 For some years now, efforts are underway to “normalize,” i.e., legitimate pedophilia. See:

One way to normalize something that is illegal/immoral is to joke about it.

That is why Gretchen Sisson, Ph.D., a “feminist” sociologist at the University of California – San Francisco research group Advancing New Standards in Reproductive Health (ANSIRH), wants TV shows to joke about abortion.

Toni Airaksinen reports for Campus Reform, Jan. 2, 2018, that in an article in the new issue of the journal Feminist Media Studies, Sisson proposes that television shows should use “abortion plotlines” as a valuable tool to help “destigmatize” abortion:

“The purpose of including an abortion plotline is simply to make jokes about abortion, recognizing that such satire is valuable for some people as both a means and an end. This should not be surprising: comedy has often been used as a subversive way of challenging predominant social structures.”

Knowing all that — that a way to normalize something is to joke about it — we should be alarmed by “jokes” being made about cannibalism.

John McAfee, 72, a libertarian, is the founder of McAfee Associates that created the first commercial antivirus software.

I unblocked him. But his implication that I still eat small children was chronologically incorrect and I expect an apology.

Another tweeter CryptoSpider asks McAfee, “Chronologically incorrect? Dont u mean categorically incorrect? Or did you eat small children at some point then stopped?”. To which McAfee replied:

“In the early 80’s i used to dabble a bit in child eating. As I got older they no longer agreed with me.”

” And to be honest, i still slip from time to time and devour a third or fourth grader.”

Asked “so are you upset about the eating small children part or the chronological order part?,” McAfee replied:

“The Chronological order part of course. I stopped the practice years ago.”

Steve Huffman, 34, is the co-founder, CEO and forum administrator of the content-sharing and chat website Reddit, where he uses the alias Spez.

Huffman/Spez banned Pizzagate as a subject for a sub-Reddit thread, but not cannibalism. The sub-Reddit for cannibalism /r/Cannibals is titled “We Eat People“; the moderator was Spez but now is someone called FuzzyNavel, who is suspected to be Huffman under a different alias, but denies it.

Someone on the 4chan message board compiled a composite of comments (see below) made by Steve Huffman “Spez” and “FuzzyNavel” on cannibalism:

Spez: “Shit. No skeletons in my closet, but a few in the fridge.”

FuzzyNavel: “The night I learned the truth and consumed human flesh. With BBQ sauce, of course.”

There is even an entire sub-Reddit called “Spez is a Cannibal“.

Another way to normalize cannibalism is to make it a theme in pop culture via:

And let’s not forget Reza Aslan, the CNN host who dined on human brain with cannibals. Aslan’s series was called “Believer”:

Even the game show Jeopardy had to make a point that a contestant — proofreader/editor Flora Leen — on a recent episode, broadcast on January 10, 2018, had dined with cannibals.

(3) Pop singer Katy Perry, who is on video saying she had sold to the Devil, glamorizes cannibalism in a music video of her 2017 single, “Bon Appétit”. The music video is a macabre step-by-step cooking recipe featuring the singer as the main course, ending with Perry about to dine from a plate full of human body parts.