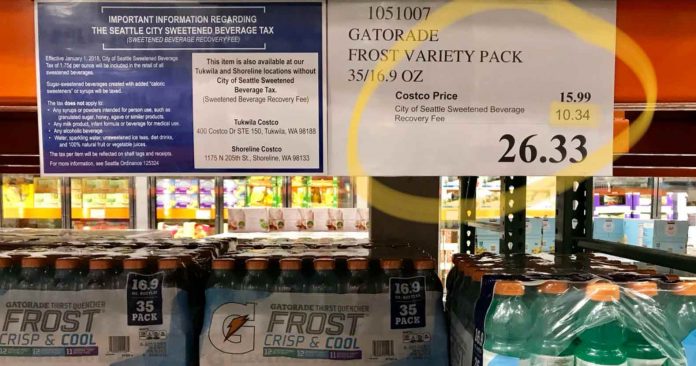 Seattle, WA – In an effort to create a $15 million dollar revenue stream to help people “have better access to fresh fruits and vegetables,” according to KIRO 7, the city of Seattle has begun imposing a 1.75 cent per ounce tax on all sugary beverages.

Revealing the extreme absurdity of the new tax, a Gatorade Frost Variety Pack at Costco, previously priced at $15.99, will now be taxed $10.34—leaving many consumers with sticker shock at the $26.33 price tag.

Costco also reminding you hey – no tax on this outside the city. Thoughts?? @KIRO7Seattle pic.twitter.com/xN2C4Csoe7

Of course, if one is fed up with the imposition of an absurdly high excise tax, this can be mitigated by going to the Costco stores in nearby cities of Shoreline and Tukwila—and effectively opting out of the Sweetened Beverage Tax.

The reality is that when a small tax is imposed, there is less likelihood of someone going through the inconvenience of a road trip, but such drastic price increases provide the impetus for many consumers to drive a few miles out of their way to save the extra money.

Some people say that they will make a switch to diet soda, which city officials say is “the point” of the tax—to get “consumers to go for healthier options,” according to KIRO 7.

Tellingly, the advocates for the tax seem to take oddly contradictory positions, as Scott Drenkard of the Tax Foundation keenly noted on Twitter:

“First they interview people at the Costco who are rightfully shocked at how high prices on soda and sports drinks are now (they are almost doubled). Then they interview a public health advocate who says ‘that’s right! We want these prices to change people’s behavior and slow sales!’ Then they talk to the consumer, ‘think you’ll change your behavior, maybe even shop somewhere else?’ And she’s like, ‘ya the Tukwila store is close enough.’ Then they ask a city council member if this will hurt local [business], who says ‘there is no data’ suggesting that. Then the SAME public health advocate says that people won’t respond to price increases, shopping elsewhere because it isn’t ‘worth their while.’”

Let’s be clear—contrary to public statements about advocating for public health—the government isn’t trying to dissuade people from drinking sugary drinks. In fact, the government is counting on people consuming these drinks—otherwise, it won’t be able to fund it’s $15 million dollar fresh fruits and veggies program.

The tax code is being used as a hammer to punish behavior and generate revenue—a clearly shortsighted proposition.

In the name of public health, the government attempts to disincentivize certain behaviors, but there are often subversive effects from such actions.

While the stated goal is to greatly reduce the use of a given product, these types of policies often precipitate the rise of black markets and smuggling.

And while on the surface it sounds almost absurd, a massive soda tax has the ability to create an underground soda market. In fact, this actually took place in Philadelphia when a similar tax was instituted.

These type of sin taxes have created a black market for “loosie” cigarettes in New York.

Which brings us full circle.

Now the government needs to use police resources to enforce regulations and stop the now illegal trade in cigarettes or soda.

Tragically, in New York, the death of Eric Garner at the hands of police, which sparked massive protests, was the direct result of police enforcement of the cigarette tax—as Garner was suspected of selling “loosie” cigarettes.

The only reason police had to come into contact Garner on the day they killed him was for selling cigarettes.

Seattle would be well advised to learn from the tragic mistake of New York—before it ends up in a similar situation.