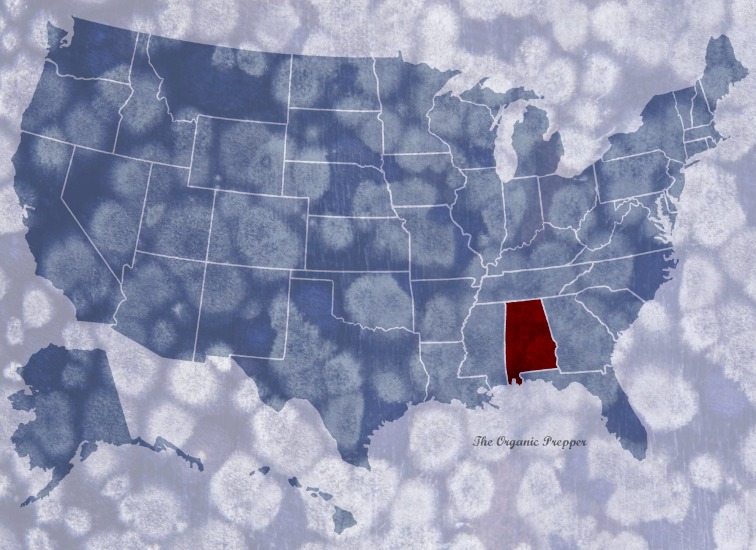 Citing a strain on “overwhelmed” health resources, Governor Kay Ivey declared an official State of Emergency in Alabama on Thursday due to the rapidly spreading flu epidemic.

WHEREAS the State Health Officer has reported that an outbreak of the influenza virus has occurred in the State of Alabama; and

WHEREAS this outbreak poses a high probability of widespread exposure to an infectious agent that poses significant risk of substantial harm to a large number of people in the affected population; and

NOW, THEREFORE, I, Kay Ivey, Governor of the State of Alabama, pursuant to relevant provisions of the Alabama Emergency Management Act of 1955, section 31-9-1 et seq., Code of Alabama (1975), on the recommendation of the State Health Officer, do hereby declare that a State Public Health Emergency exists in the State of Alabama. I direct the appropriate state agencies to exercise their statutory and regulatory authority to assist the communities and entities affected. I also direct the Alabama Department of Public Health and Alabama Emergency Management Agency to seek federal assistance as may be available.

FURTHER, I direct the following:

1. Health care facilities that have invoked their emergency operation plans in response to this public health emergency may implement the “alternative standards of care” plans provided therein, and such are declared to be the state approved standard of care in health care facilities to be executed by health care professionals and allied professions and occupations providing services in response to this outbreak.

3. All health care professionals and assisting personnel executing in good faith under the “alternative standards of care” are hereby declared to be “Emergency Management Workers” of the State of Alabama for the purposes of title 31 of the Code of Alabama.

4. The State Health Officer shall inform members of the public on how to protect themselves and actions being taken in response to this public health emergency.

According to the CDC, this is the worst outbreak in their 13 years of tracking influenza.

The reason this year’s flu season is more severe than usual is because it involves the dreaded H3N2, a strain of the influenza A virus that causes more health complications and is more difficult to prevent.

H3N2 hits people harder than other seasonal flu strains and can be especially deadly among vulnerable groups like the elderly and children. Researchers still aren’t sure why, but they’ve found that a flu season involving the H3 virus is generally nastier — with more hospitalizations and flu-related deaths — than seasons involving mostly H1N1 or influenza B viruses.

This year, more than 80 percent of flu cases involve H3N2 strain. And the CDC’s Jernigan reported that there were 22.7 hospitalizations related to flu per 100,000 population during the week of December 31, 2017, to January 6, 2018. That’s a doubling from 13.7 the week before. “We’re seeing a rapid rise in the number of people being hospitalized,” Jernigan said. (source)

But it isn’t just Alabama.

The flu epidemic is spreading across the US.

18 people have died in Dallas, Texas from the flu, 4 in Tennessee, and 27 have died in California. Hospital waiting rooms are jammed with flu victims, the doctors are running out of medication, ambulance services are strained and even IV bags are in short supply. Influenza is impacting 46 states. In total, the flu has killed 85 adults and 20 children in the United States and last week, the CDC reported that the hospitalization rate for people with the flu DOUBLED.

Here’s the CDC’s map of the flu’s spread throughout the US as of the last day of 2017. 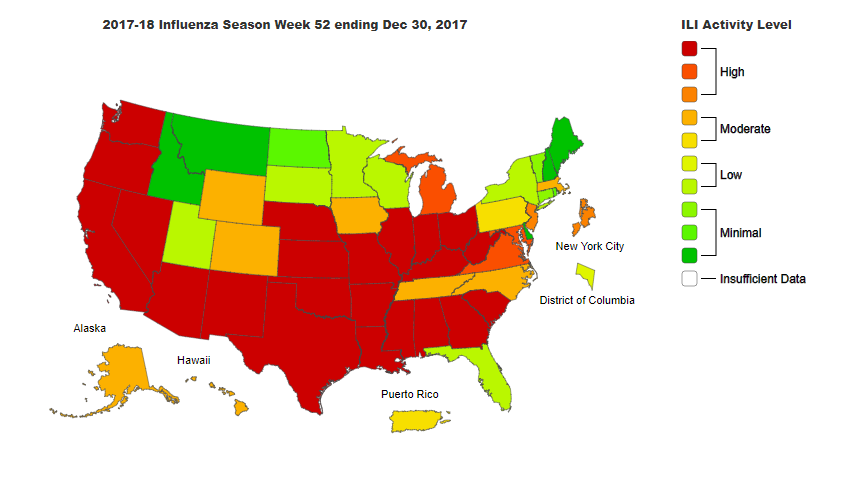 As mentioned above, 80% of the cases in the US are H3N2. As usual, although this year’s flu vaccination does NOT protect against the H3N2 strain, “experts” are still urging everyone to get a shot anyone. (Despite the fact that some numbers say it is only 10% effective.)

One hundred years after the Spanish flu pandemic, could we be facing another deadly global outbreak?

Some resources for pandemic preparedness are this article and this book.

How the flu kills

When you start getting sick, it can be hard to tell if you have a cold or the flu. This guide can help. You can treat your symptoms with home remedies, but this is really NOT a virus to mess around with. It’s killing people. Rapidly. Even those who seem to be in prime health can be felled by the virus, like the 21-year-old fitness enthusiast who died 5 days after contracting H3N2.

According to Scientific American, it isn’t the flu that kills people, but the body’s attempt to heal itself.

After entering someone’s body—usually via the eyes, nose or mouth—the influenza virus begins hijacking human cells in the nose and throat to make copies of itself. The overwhelming viral hoard triggers a strong response from the immune system, which sends battalions of white blood cells, antibodies and inflammatory molecules to eliminate the threat. T cells attack and destroy tissue harboring the virus, particularly in the respiratory tract and lungs where the virus tends to take hold. In most healthy adults this process works, and they recover within days or weeks. But sometimes the immune system’s reaction is too strong, destroying so much tissue in the lungs that they can no longer deliver enough oxygen to the blood, resulting in hypoxia and death.

In other cases it is not the flu virus itself that triggers an overwhelming and potentially fatal immune response but rather a secondary infection that takes advantage of a taxed immune system. Typically, bacteria—often a species of Streptococcus or Staphylococcus—infect the lungs. A bacterial infection in the respiratory tract can potentially spread to other parts of the body and the blood, even leading to septic shock: a life-threatening, body-wide, aggressive inflammatory response that damages multiple organs. Based on autopsy studies, Kathleen Sullivan, chief of the Division of Allergy and Immunology at The Children’s Hospital of Philadelphia, estimates about one third of people who die from flu-related causes expire because the virus overwhelms the immune system; another third die from the immune response to secondary bacterial infections, usually in the lungs; and the remaining third perish due to the failure of one or more other organs. (source)

Social isolation is the best way to keep your family healthy, but in a world where we work and go to school, this isn’t always possible. A strict handwashing regimen can also help lessen the likelihood of contracting the flu.

Worst case scenario, if you DO get sick, please don’t hesitate to seek medical attention if you need it. This virus can kill otherwise healthy people within days.

Thank you to Melissa and Jennifer for the tip!