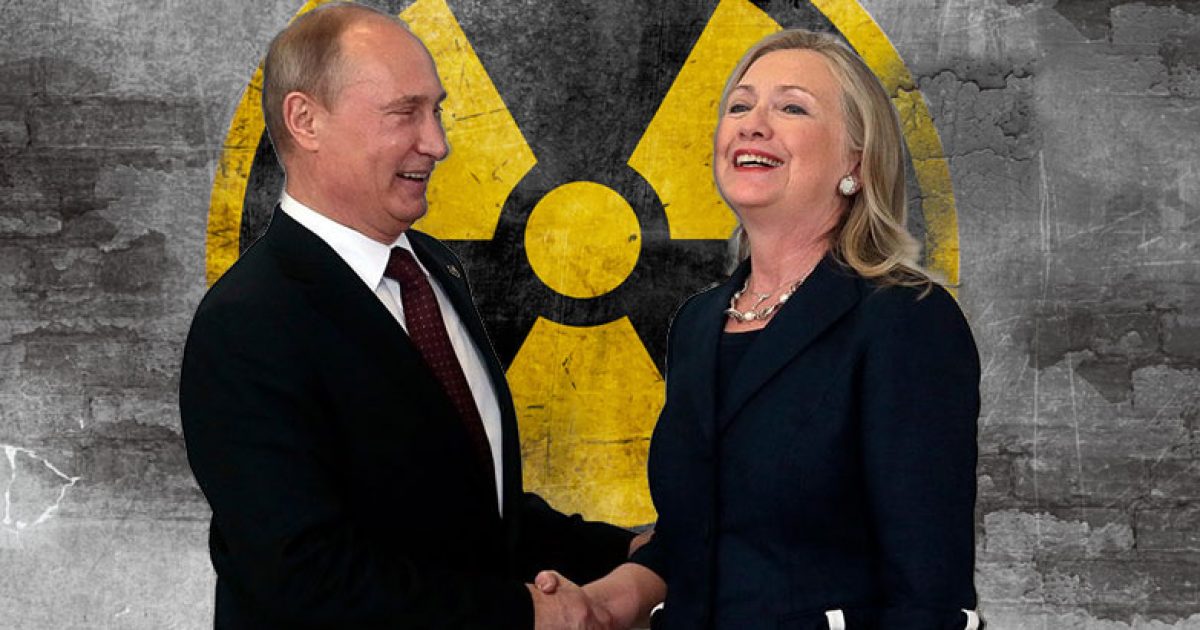 On Friday, the Justice Department unsealed an 11-count indictment concerning the Uranium One scandal.  Sadly, it did not include former Secretary of State Hillary Clinton, but rather former DoD intelligence analyst-turned uranium transportation executive Mark Lambert of Mount Airy, Maryland.

Lambert, 54, was charged with one count of conspiracy to violate the Foreign Corrupt Practices Act (FCPA) and to commit wire fraud, seven counts of violating the FCPA, two counts of wire fraud and one count of international promotion money laundering.  The charges stem from an alleged scheme to bribe Vadim Mikerin, a Russian official at JSC Techsnabexport (TENEX), a subsidiary of Russia’s State Atomic Energy Corporation and the sole supplier and exporter of Russian Federation uranium and uranium enrichment services to nuclear power companies worldwide, in order to secure contracts with TENEX.

According to the DOJ:

In June 2015, Lambert’s former co-president, Daren Condrey, pleaded guilty to conspiracy to violate the FCPA and commit wire fraud, and Vadim Mikerin pleaded guilty to conspiracy to commit money laundering involving violations of the FCPA.  Mikerin is currently serving a sentence of 48 months in prison and Condrey is awaiting sentencing.  The indictment includes allegations against Lambert based on his role in effectuating the criminal scheme with Condrey, Mikerin, and others.

Back in October 2017, The Hill reported that the FBI had uncovered a Russian bribery plot before the Obama administration approved the controversial nuclear deal with Moscow.

“The Russians were compromising American contractors in the nuclear industry with kickbacks and extortion threats, all of which raised legitimate national security concerns. And none of that evidence got aired before the Obama administration made those decisions,” a person who worked on the case told The Hill, speaking on condition of anonymity for fear of retribution by U.S. or Russian officials.”

Based on what the FBI knew – including evidence which purportedly includes a video of Russians preparing briefcases of bribe money – the Uranium One deal never should have gone through. Moreover, both Robert Mueller and current deputy Attorney General Rod Rosenstein were directly involved – and current Attorney General Jeff Sessions and other Justice Department officials appear to be covering for them.

In short, the FBI had ample evidence of the Russian bribery plot before the Obama administration approved the Uranium One deal thanks to their embedded mole in the Russian nuclear industry.

Attorney General Jeff Sessions originally tried to claim that there was no connection between Uranium One and the nuclear transport bribery case, however several congressional republicans pushed back:

“Attorney General Sessions seemed to say that the bribery, racketeering and money laundering offenses involving Tenex’s Vadim Mikerin occurred after the approval of the Uranium One deal by the Obama administration. But we know that the FBI’s confidential informant was actively compiling incriminating evidence as far back as 2009,” Rep. Ron DeSantis, (R-Fla.) told The Hill.

“It is hard to fathom how such a transaction could have been approved without the existence of the underlying corruption being disclosed. I hope AG Sessions gets briefed about the CI and gives the Uranium One case the scrutiny it deserves,” added DeSantis, whose House Oversight and Government Reform subcommittees is one of the investigating panels.

“The essential question is whether the Obama Justice Department provided notice of the criminal activity of certain officials before the CFIUS approval of the Uranium One deal and other government decisions that enabled the Russians to trade nuclear materials in the U.S,” Grassley scolded.”

Meanwhile, journalists John Solomon and journalist Sara Carter claim to have copies of the FBI informant’s evidence, while Carter issued an explosive report in late November laying out the players, the timeline, and the evidence at hand.

“By the time the sale of Uranium One was approved by the Obama Administration, the FBI’s investigators had already gathered substantial evidence and the bureau was also aware of Russia’s intentions to enter the U.S. energy market and its desire to purchase a stake in American uranium,” Carter writes.

“This is not just about bribery and kickbacks but about a U.S. company that was transporting yellow-cake for the Russians with our approval,” an unnamed U.S. Intelligence official told Carter, adding “This should raise serious questions. At the time everyone was concerned about Russia’s ties to Iran, we still are. And of course, Russia’s intentions and reach into the U.S. energy market.”

Former Rep. Mike Rogers (R-MI), who chaired the House Intelligence Committee during the time the FBI probe was being conducted, told The Hill, “Not providing information on a corruption scheme before the Russian uranium deal was approved by U.S. regulators and engage appropriate congressional committees has served to undermine U.S. national security interests by the very people charged with protecting them.  The Russian efforts to manipulate our American political enterprise is breathtaking.”

Not so fast.  This was not the “Russian efforts to manipulate our American political enterprise.”  It was Barack Hussein Obama Soetoro Sobarkah and Hillary Clinton, traitors to America, who facilitated this and signed off on it.  When will we see those indictments?