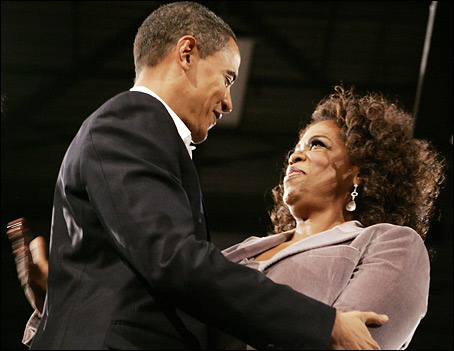 (I wrote this article quite a few years ago. I feel that it’s relevant now in light of the Oprah for President movement.)

Obama’s political success was built on his ability to invoke values detached from belief systems. To break away symbols and ideals from religious and national value systems, and mix and match them into his own sound bites. Like the famous Hope poster, that mixed patriotic color schemes with socialist realism, or his own speeches which invoked the Founders in support of socialism.

The Obama wave was piggybacking on a culture where context had ceased to matter. Obama’s image had more in common with the way hip hop artists sample songs, than with a symphony. His campaign was the perfect trailer to a movie that would never be released. It was the marriage of corporate advertising campaigns, pop culture, radical politics and Americana– thrown together in a pot and boiled into one indecipherable mix that was appealing, and yet completely void of meaning.

Obama kept on saying very little of substance, yet entertaining his audiences. His speeches called up spirituality devoid of religion, Americana devoid of patriotism and ideals devoid of ideas. He appropriated them all and used them as props in his show.

His obvious inspiration for this was not Jeremiah Wright, who did provide plenty of textual inspiration, but Oprah herself. Oprah’s success lay in marketing that same diffuse spirituality, not grounded in any actual belief system. Instead what she offered was an endless self-centered buffet, spirituality as self-empowerment, with herself and her chosen gurus as the center of a new commercial belief system.

Obama echoed that same self-centered appeal, telling audiences, “We are the ones we have been waiting for”, a quote from one of Oprah’s favorite authors, and appealing to their own search for meaning. A favorite Oprah theme. The search for meaning is a common enough crutch for the narcissist, who wants fulfillment on his or her own terms, rather than commitment. Oprah has been catering to her audiences’ endless search for meaning. Obama was just the latest of those gurus.

Obama had daringly sold his journey as America’s journey, encouraging voters to not only identify personally with him, but to position his own background as the embodiment of America. Rather than identifying with Americans, he expected them to identify with him. Structuring his campaign as a journey, he spoke to the need for drama by the detached and disaffected. People who were too busy looking for meaning, to understand that meaning cannot be detached from the larger religious and cultural ideas that define civilization.

Yet that was exactly what Obama appeared to offer, context free ideas, faith without religion, hope without anything tangible to actually hope for.

If Oprah offered fast-food meaning on television, Obama offered fast-food solutions in politics. Paying for it was never an issue. Consequences were off the table as well. By clothing a self-centered appeal in altruistic clothing, people felt they were engaging in self-improvement, when they were only being manipulated by professional egotists.

Oprah and Obama shared broken families and a profound greed and resentment that they learned to disguise professionally as empathy and ambition. By channeling the resentments of others, they could get what they wanted, without appearing harsh or abrasive. By selling other people on answers they did not believe in themselves, they could position themselves as spiritual leaders, without the fuss and limitations of organized religions, written creeds and higher deities. Instead they marketed their own life stories as a form of spirituality, convincing their followers to become invested in their success. Their own achievements were no longer personal, but national and global.

Self-realization as religion is a self-indulgent faith, which is what makes it both hollow and appealing. It begins with religion as therapy, and ends with therapy as religion. It borrows religious metaphors, while discarding their meaning. That is the faith that Oprah and Obama have successfully sold millions on. A vaporous hope and faith, with nothing standing behind them. Both came with an innate understanding of the profound weakness of their followers in a post-modern age. They copied the templates of the intersection of religion and entertainment, removing any gods from the equation, and leaving behind personal narratives, feel-good cleaning rituals and of course, money.

Yet there is a larger problem behind Obama and Oprah, the problem of a culture that neglect context, and instead favors short-term entertainment. The Obama Administration may go down as the most expensive public entertainment in American history. And the same empty yearning, which Obama exploited so very well, will still be there.

There is a hole in our culture, and it is there because the verities that once defined us have been marginalized. Religion and national identity are relentlessly mocked by the same media culture that has usurped their place, with its own replacements like Oprah. What once provided meaning to people, lies by the wayside. And instead people search for personal fragmented meanings, for happiness and self-realization, when the search itself represents a denial of the mature commitments that make happiness and self-realization possible. Behind that fragmentation is a culture at loss to understand its own identity filled with lonely individuals looking for something to hang on to, and predators whose own identities come from gaining their confidence, and preying on them.

The left has always understood that it can only succeed by replacing religion and nationalism, either through direct assault, or by dressing their own ideas up in mock nationalistic and religious colors. The left was never atheistic. Its religion was government, its functionaries and doctrines were its priests and its creed. And its depredations have left behind a West with a wounded soul.

It is not only the likes of Oprah and Obama who know how to exploit that wound. There are far worse predators drawing closer to the campfire. Islam is preparing to engulf a Europe that has turned its back on its own values. What predators will come for America in the night is still an open question. With Obama, we have seen the first ugly glimmer of what may be coming. But unless America reclaims its soul, worse predators drawn by the blood of a wounded culture will come.