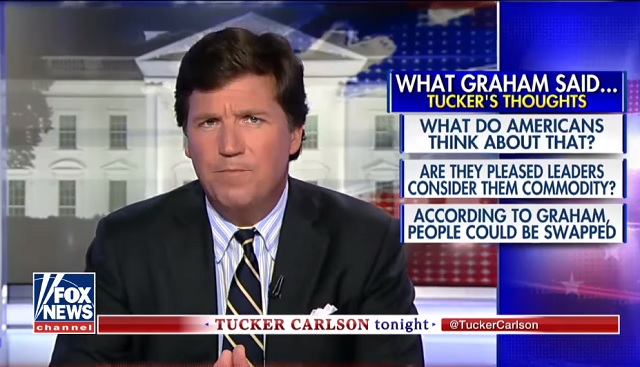 Friday on Fox News, Tucker Carlson questioned Lindsey Graham’s claim that “America is an idea” and “not defined by its people.”

“According to Lindsey Graham, you could take our entire population and swap it out for 320 million, I don’t know, Chinese or Indians or Africans or Canadian or people from New Zealand, and the place would be no different, so long as the idea was still there,” Carlson said. “Does anyone actually believe that?”

Washington, D.C. is a divided city, but today saw a moment of rare political unity. Lawmakers in both parties came together in grave agreement that it was unfortunate, unacceptable, indeed threatening, that President Trump would refer to poor and dangerous countries as in effect poor and dangerous.

Now, some of the outrage was tactical, obviously. A way to score political advantage, but a great deal of it was entirely real. It was authentic rage.

So, why are the people in charge hysterical about this? Is it because Trump said something racially insensitive?

Let’s see. Just yesterday, Nancy Pelosi dismissed the DACA negotiation because there were too many white people involved and most people here didn’t even notice. So, left-wing attacks on the basis of race are now common. Very common.

So, could it be they found it shocking the president would criticize an entire nation? Maybe. But then, the left has no problem bashing huge parts of this country.

HILLARY CLINTON, FORMER DEMOCRATIC PRESIDENTIAL CANDIDATE: You can put half of Trump’s supporters into what I call the basket of deplorables. Right? The racist, sexist, homophobic, xenophobic, Islamophobic.

BARACK OBAMA, FORMER PRESIDENT OF THE UNITED STATES: They cling to guns or religion or antipathy towards people who aren’t like them.

NANCY PELOSI, HOUSE MINORITY LEADER: The five white guys, I call them. I said, “You’re going to open a hamburger stand next or what?”

CARLSON: So, they don’t have a problem dismissing entire populations. So, what is the real reason for the panic you are watching right now on cable television?

Maybe it’s because Trump’s remarks are forcing precisely the kind of conversation our leaders don’t want to have. He didn’t do it on purpose. It was accidental, but he still raised questions they’d rather not answer, like who exactly are we importing into our country and how are they doing once they get here?

The answer, of course, well, they are all valedictorians and war heroes and, in fact, way more impressive and way more American than you will ever be, so shut up. That’s what we’re told. That’s what we are required to believe. What if it’s not true?

Last year, the U.S. accepted 23,000 people from Haiti and 172,000 from Mexico. Immigration from El Salvador have been so brisk in recent years that one in three Salvadorians now lives in the United States. Has America become a better country as a result? Maybe, maybe not. Maybe we ought to talk it through and decide before we continue with our current immigration policy.

Leaders who actually cared about their people would do exactly that. And yet, our leaders just yell at us until we stop asking questions.

Sen. Lindsey Graham of South Carolina released a statement today that neatly summarizes how most of official Washington thinks about this subject. In a statement, Graham dismisses the idea that America should even think about what kind of people it lets in.

“I have always believed that America is an idea,” Graham wrote, “not defined by its people, but by its ideals. Diversity has always been our strength, not our weakness.”

America is defined by its ideals, OK. So, what are those ideals? It might be useful to know considering how important they are. Well, diversity is our strength is the only one our leaders seem to agree on. The less we have in common, somehow the stronger we are. Is that true? We better hope it’s true because we’re betting everything on it.

But there’s a deeper problem with what Sen. Graham said. “America is not defined by its people.” Really? What do its people think about that? Are they pleased to learn their leaders consider them merely a commodity, a set of interchangeable parts?

America’s actual people with their actual families and towns and traditions and history and customs may be surprised to learn that they are irrelevant to the success or failure of what they imagined was their country.

According to Lindsey Graham, you could take our entire population and swap it out for 320 million, I don’t know, Chinese or Indians or Africans or Canadian or people from New Zealand, and the place would be no different, so long as the idea was still there. Does anyone actually believe that?

How about we test that idea starting with the U.S. Senate? Would South Carolina get the same representation from someone randomly selected out of the phone book? As Lindsey Graham would say, the Senate isn’t defined by its people. It’s really just an idea. And as soon as you start defining things by ideas rather than individuals, people become irrelevant.