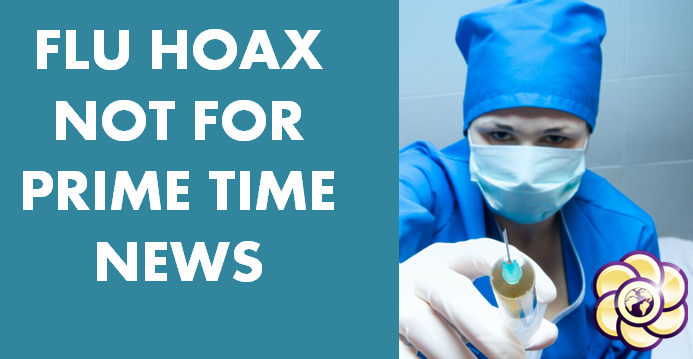 In case you haven’t been following the uproar over the flu outbreak, you’ve missed the fact that…

Health authorities admit this year’s flu vaccine is only 10% effective.

But of course, they urge you to take the vaccine anyway.

Why is this year’s vaccine ineffective? Because it’s made using chicken eggs, and researchers have discovered that the flu virus—which is placed in the vaccine—mutates in chicken eggs.

This is the conventional explanation. If you think it’s the whole story, I have condos for sale on the moon.

You see, vaccines have been made using chicken eggs—not just this year—but for the past 70 years.

That would mean the flu vaccine has been ineffective for decades.

But wait. There’s more. Much more. I’ll break it down into several scandals.

SCANDAL ONE: (I covered this the other day): Dr. Peter Doshi, writing in the online BMJ (British Medical Journal), reveals a monstrosity.

“…even the ideal influenza vaccine, matched perfectly to circulating strains of wild influenza and capable of stopping all influenza viruses, can only deal with a small part of the ‘flu’ problem because most ‘flu’ appears to have nothing to do with influenza. Every year, hundreds of thousands of respiratory specimens are tested across the US. Of those tested, on average 16% are found to be influenza positive.”

So even if you’re a true believer in mainstream vaccine theory, you’re on the short end of the stick here. They’re conning your socks off.

The basic flu symptoms—cough, fever, chills, sore throat, muscle aches, weakness—can be caused by a variety of factors that have nothing to do with a flu virus.

SCANDAL TWO: In December of 2005, the British Medical Journal (online) published another shocking Peter Doshi report, which created tremors through the halls of the Centers for Disease Control (CDC), where “the experts” used to tell the press that 36,000 people in the US die every year from the flu.

This death toll is obviously far lower than the old parroted 36,000 figure.

“Well, uh, we used to say that 36,000 people die from the flu every year in the US. But actually, all we can prove is about 20 deaths. However, we can’t admit that, because if we did, we’d be exposing our gigantic psyop. The whole campaign to scare people into getting a flu shot would have about the same effect as warning people to carry iron umbrellas, in case toasters fall out of upper-story windows…and, by the way, we’d be put in prison for fraud.”

SCANDAL THREE: The so-called Swine Flu pandemic of 2009. This one is a real eye-opener. The CDC was caught with its pants down.

Swine Flu was hyped to the sky by the CDC. The Agency was calling for all Americans to take the Swine Flu vaccine. Remember?

The problem was, the CDC was concealing a very dirty secret.

At the time, star CBS investigative reporter, Sharyl Attkisson, was working on the Swine Flu story. She discovered that the CDC had secretly stopped counting cases of the illness—while, of course, continuing to warn Americans about its unchecked spread.

So now…when health officials begin waving red flags and raising alarms about a current viral flu outbreak, it would be more than reasonable to demand they answer questions about their past lies and deceptions.

Unless you just want to take them at their word.

If so, good luck.