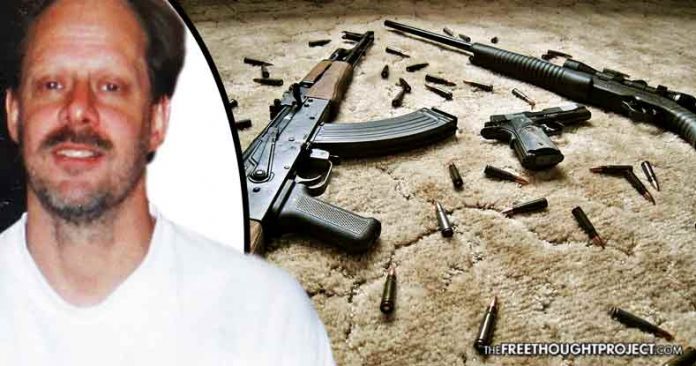 New details have been released from the FBI’s investigation into the Las Vegas Shooting, and the information from suspect Stephen Paddock’s email account in the months leading up to the shooting is giving new insight into why he may have been hoarding two dozen guns in his hotel room.

The deadliest mass shooting in modern U.S. history was blamed on one man within hours, and the FBI has consistently claimed that Paddock was a “lone wolf” shooter who intentionally transported an arsenal of guns, ammunition, and supplies to his hotel room on the 32nd floor of the Mandalay Bay Hotel, and then unleashed barrage of gunfire from the bedroom window that killed 58 people and injured more than 500.

While the surveillance footage from Paddock’s stay at the hotel has yet to be released, the newly unsealed court documents are finally giving some insight into his conduct in the months leading up to the shooting on Oct. 1.

An email exchange from [email protected], a Microsoft account FBI agents claimed was used by Paddock, was included in an affidavit reported by NPR. The date was July 6, 2017—about three months before the shooting—and while the FBI noted that it is unclear who is behind [email protected], the email account Paddock was contacting, the information included is significant.

In the first message, Paddock claimed that the recipient would have the opportunity to try out the weapons before they purchased them. He then wrote “We have huge selection,” indicating that he was not working alone, and he said he was located “in the Las Vegas area.”

While Paddock did live in Mesquite, Nevada, and reports claimed that he was a retired man living with his girlfriend, he made trips to Las Vegas often to gamble, and those who knew him described him as “low key and relaxed, a good guy.” His past included jobs with the IRS and the Department of Defense.

However, the email exchanges released by the FBI indicate that Paddock was presenting himself as some sort of arms dealer, sending an email that said, “for a thrill try out bumpfire ar’s with a 100 round magazine.”

The email address Paddock was contacting responded and said, “we have a wide variety of optics and ammunition to try,” which as the report noted, left investigators wondering if Paddock was sending test emails to another account he owned, or if he was contacting another dealer or a customer.

Federal agents were granted warrants to search Paddock’s Facebook, Instagram and Amazon accounts, along with a locked phone that was found in the hotel room. These details are the first that have been released from Paddock’s online communications, and the documents also include significant details about what the FBI has learned about Paddock’s girlfriend.

Within hours of the time police named Stephen Paddock as the suspect in the shooting, his girlfriend Marilou Danley was also named publicly. Authorities claimed she was visiting family in the Philippines, and they ultimately determined that she was not complicit in the massacre.

In addition to reports claiming that Danley told investigators that her fingerprints may be on some of the bullets stored in Paddock’s home—and they were—the report from NPR also noted that the timeline of Danley’s Facebook account suggests that she knew Paddock was involved in something.

After the first reports of gunfire happened at 10:08 p.m. on Oct. 1, Danley’s Facebook account was set to private at 12:38 a.m. and then deleted entirely at 2:46 a.m. But it was not until 3:30 a.m. that Paddock’s name was publicly released as the suspect in the shooting.

There are a number of questions remaining about how the shooting unfolded, and as The Free Thought Project reported last week, MGM Resorts International is now claiming that the hotel staff at Mandalay Bay had at least 10 interactions with Paddock in the days before the shooting.

A spokesperson for MGM told The Las Vegas Review-Journal that the interactions on Oct. 1 consisted of a room service delivery and a visit from housekeeping, and even though members of the hotel staff are trained to report any suspicious activity, they did not find any reason to do so when interacting with Paddock.

“Mandalay Bay staff, room service and housekeeping had contact with Paddock or entered his suite more than 10 times over the course of his stay, including the three days leading up to October 1. There were numerous interactions with Stephen Paddock every day at the resort, including a room service delivery and a call with housekeeping on October 1, all of which were normal in nature.”