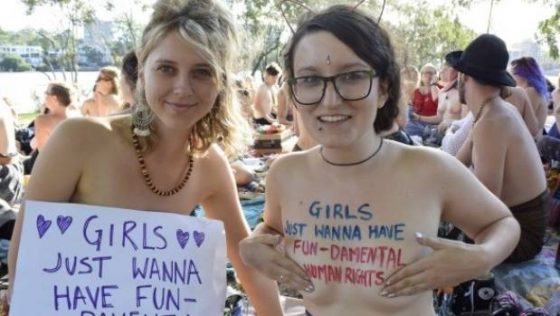 Women who make up the “Free the Nipple” movement are taking their right to go topless to the high courts. Those who subscribe to the movement believe that they should be allowed to bare their nipples in public since it is acceptable for men to do so.

According to ABC News, a U.S. District Court judge ruled in October that a public indecency ordinance in Missouri didn’t violate the state constitution by allowing men, but not women, to show their nipples. But in February, a U.S. District Court judge blocked the city of Fort Collins, Colorado, from enforcing a law against women going topless, arguing it was based on gender discrimination. The city of Ft. Collins is appealing.

“The law in the state of New Hampshire is that it is legal for a woman to go topless so we’re trying to get the town of Laconia to recognize and to stay with the state,” Heidi Lilley said. “The town ordinance, in our opinion, is not constitutional. We’re hoping the Supreme Court will see that.” Lilley and two other women were going topless at a beach in New Hampshire when someone “complained” about the women’s bare breasts.

That’s when a police officer demanded the three women cover up, and when they refused, they were arrested. A legal motion to dismiss a case against the women was denied so they have appealed it to the New Hampshire Supreme Court, which is expected to hear the case February 1. The women want to the court to dismiss their conviction by invalidating the city’s ordinance.

In New Hampshire, Lilley and another woman first challenged the ban when they were cited for going topless at a Gilford beach in 2015. A judge later dismissed that case but the Legislature took up the debate several months later, with a bill that would have made it a crime for women to expose their breasts or nipples in public.

Supporters of the bill warned that allowing women to go bare-breasted at beaches could lead to scenes of topless women at libraries and Little League games. They said they were trying to protect families and children. Opponents said such a ban violates the state constitution.

“Here, the Laconia ordinance prevents women from making choices about their state of bodily expression using the full range of options available to their male counterparts,” said Gilles Bissonnette, the ACLU of New Hampshire’s legal director. “This case presents an issue of significant importance concerning the right of women under the New Hampshire constitution to speak freely and the constitutional implications of codified stereotypes related to females’ roles and sexuality.”

The New Hampshire Attorney General argued that the city has the right to “prevent any disturbances,” noting women exposing their nipples would cause “disturbances” where a man without a shirt wouldn’t.