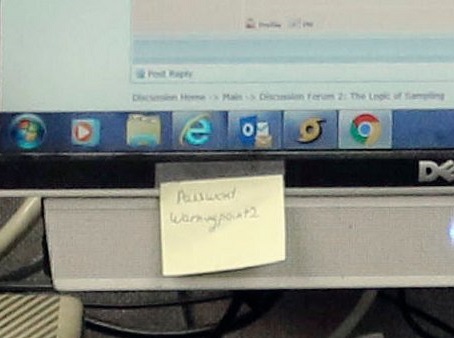 On Saturday morning, January 13, residents of blue-state Hawaii (66.22% voted for Hillary in the 2016 presidential election) went into a panic when one very incompetent and unnamed employee at Hawaii Emergency Management Agency (EMA), as described by Hawaii Gov. David Ige, “pushed the wrong button” on his computer and sent a “this is not a drill” emergency notification of an incoming ballistic missile.

After the EMA sent the emergency alert, it took the agency 38 minutes before it assured Hawaiians that the alert was a false alarm.

A photo from July recently resurfaced on Twitter, showing the Hawaii Emergency Management Agency to be a Mickey Mouse operation.

The photo was taken on Friday, July 21, 2017, of Jeffrey Wong, current operations officer of EMA, standing in front of a bank of computer screens monitoring hazards at the agency’s headquarters in Honolulu. (Business Insider)

At the bottom of a computer screen next to Wong is a yellow Post-It sticky with a password scribbled on it, helpfully labeled “Password”.