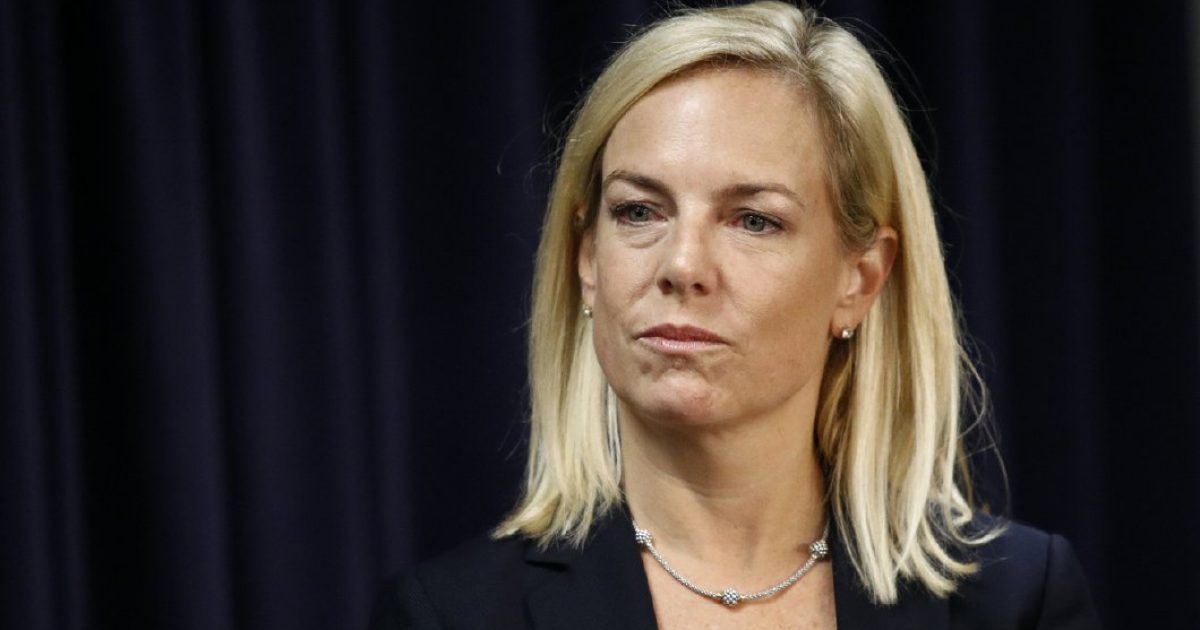 On Tuesday, Secretary of Homeland Security Kirstjen Nielsen confirmed that DHS had spoken to the Department of Justice to see if they would be able to level criminal charges against representatives of sanctuary cities who failed to cooperate with the deportation of illegal immigrants in their cities.

In answering questions, Nielsen mentioned that she did not recall President Trump using the term “shithole countries” to refer to immigrants from Haiti and Africa.  However, she did tell Senator Dick Durbin (D-IL), “I don’t remember the specific words [Trump used].  What I was struck with, frankly as I’m sure you were as well, was the general profanity that was used in the room by almost everyone.”

“The Department of Justice is reviewing what avenues may be available,” Ms. Nielsen told Senator Kamala Harris (D-CA) of the Senate Judiciary Committee on Tuesday.

Harris’ questions came as a result of US Immigration and Customs Enforcement Director Tom Homan statements on Fox News that the Department of Justice was asked to “look into criminal charges for elected officials with sanctuary policies as they are harboring illegal aliens.”

Specifically, he was responding to a “law” that was passed by California on January 1 that sought to protect sanctuary cities that harbor immigration law violators.

The request that was given to the DOJ by Homeland Security was not dodged either.

“The context of this is, of course, not only putting my ICE officers at risk but also finding an efficient and effective way to enforce our immigration laws,” Nielsen told Harris.

“If these sanctuary cities are going to harbor and conceal criminal illegal aliens from ICE, which is in direct violation of Title 8 of the U.S. Code, federal arrest warrants should be issued for their elected officials,” Bristol County Sheriff Thomas Hodgson told the House Subcommittee on Illegal Immigration previously. “Our citizens would be safer if we never stopped enforcing immigration law and if we never formed or turned a blind eye toward sanctuary cities.”

Frankly, the questions should not have even been asked of the DOJ if Homeland Security was doing its job.  The law is clear.

knowing that a person is an alien, brings to or attempts to bring to the United States in any manner whatsoever such person at a place other than a designated port of entry or place other than as designated by the Commissioner, regardless of whether such alien has received prior official authorization to come to, enter, or reside in the United Statesand regardless of any future official action which may be taken with respect to such alien;

aids or abets the commission of any of the preceding acts,
shall be punished as provided in subparagraph (B).

(2)Any person who, knowing or in reckless disregard of the fact that an alien has not received prior official authorization to come to, enter, or reside in the United States, brings to or attempts to bring to the United States in any manner whatsoever, such alien, regardless of any official action which may later be taken with respect to such alien shall, for each alien in respect to whom a violation of this paragraph occurs—

be fined in accordance with title 18 or imprisoned not more than one year, or both; or

an offense committed with the intent or with reason to believe that the alien unlawfully brought into the United Stateswill commit an offense against the United States or any State punishable by imprisonment for more than 1 year,

an offense done for the purpose of commercial advantage or private financial gain, or

Any person who, during any 12-month period, knowingly hires for employment at least 10 individuals with actual knowledge that the individuals are aliens described in subparagraph (B) shall be fined under title 18 or imprisoned for not more than 5 years, or both.

(B)An alien described in this subparagraph is an alien who—

has been brought into the United States in violation of this subsection.

(4)In the case of a person who has brought aliens into the United States in violation of this subsection, the sentence otherwise provided for may be increased by up to 10 years if—

the offense was part of an ongoing commercial organization or enterprise;

aliens were transported in groups of 10 or more; and

aliens were transported in a manner that endangered their lives; or

the aliens presented a life-threatening health risk to people in the United States.

Any conveyance, including any vessel, vehicle, or aircraft, that has been or is being used in the commission of a violation of subsection (a), the gross proceeds of such violation, and any property traceable to such conveyance or proceeds, shall be seized and subject to forfeiture.

Seizures and forfeitures under this subsection shall be governed by the provisions of chapter 46 of title 18 relating to civil forfeitures, including section 981(d) of such title, except that such duties as are imposed upon the Secretary of the Treasury under the customs laws described in that section shall be performed by such officers, agents, and other persons as may be designated for that purpose by the Attorney General.

No officer or person shall have authority to make any arrests for a violation of any provision of this section except officers and employees of the Service designated by the Attorney General, either individually or as a member of a class, and all other officers whose duty it is to enforce criminal laws.

Notwithstanding any provision of the Federal Rules of Evidence, the videotaped (or otherwise audiovisually preserved) deposition of a witness to a violation of subsection (a) who has been deported or otherwise expelled from the United States, or is otherwise unable to testify, may be admitted into evidence in an action brought for that violation if the witness was available for cross examination and the deposition otherwise complies with the Federal Rules of Evidence.

The Secretary of Homeland Security, in consultation with the Attorney General and the Secretary of State, as appropriate, shall develop and implement an outreach program to educate the public in the United States and abroad about the penalties for bringing in and harboring aliens in violation of this section.

The mayors of these cities, the city councils and anyone not working to enforce immigration law in those cities are violating this law by harboring illegal aliens.  Make the arrests, charge them according to the law above and then toss it to the DOJ.  Stop asking, and start doing.  Bring some justice for once in our country!